Torchwood: Something in the Water by Trevor Baxendale 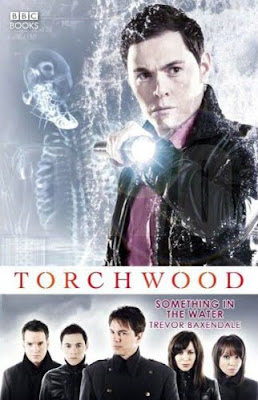 I have been going through serious withdrawal from Torchwood (the best Sci Fi show ever) and I had been seeing these books around but had not picked one up before.
Well the absence of Captain Jack and crew became too much for me the other day so I had to go buy one of the books. This isn't the first book in the series but it was the first one they had available, so into my hands, out the door, and into my house it came.
I was not disappointed by the story, it felt like I was watching a really good episode of the show and it was nice to see Tosh, Owen, and Ianto again. Those three characters are highly missed by me and I wish they could be brought back to life on the show.
So anyway back to the story the basic concept is you take the legend of Jenny Greenteeth, make her the last survivor of an alien race, strand her on Earth, and make her bent on taking control by creating homunculuses of herself. She uses a bacteria that infect human males and uses their bodies as incubators to grow the little tots. Now I know this sounds cheesy as hell and it sort of is, but it's done in a way that only Torchwood can do. Nothing was lacking in this book the humor I expect, the danger and action that compels the storyline, and the oh so wonderful Captain Jack. Captain Jack makes Torchwood for me and he doesn't let me done in this book. I can't wait for my next trip to the store so I can buy the next book in the series.
Synopsis From Back Cover:
Dr. Bob Strong's GP surgery has been treating a lot of coughs and colds recently, far more that is normal for the time of year. Bob thinks there's something up but he can't think what. He seems to have caught it himself, whatever it it - he's starting to cough badly and there are flecks of blood in his hanky.
Saskia Harden has been found on a number of occasions submerged in ponds or canals but alive and seemingly none the worse for wear. Saskia is not on any files, except in the medicals records at Dr. Strong's GP practice. But Torchwood's priorities lie elsewhere: investigating ghostly apparitions in South Wales, they have found a dead body. It's old and in an advanced state of decay. And it is still able to talk.
And what is it saying is "Water hag"...
Posted by Ryan at 7:32 PM

Ooohhh I have the series in my Netflix Queue! I can't wait to watch it1

I came to Torchwood late, but was hooked after my first episode! May have to try the books after I catch up on the series. Good to know that they won't be a disappointment!

You're the second person I know who's really liked the Torchwood books. I may have to give them a shot. :0 Any news on when the next season will be? (The person I knew had trouble finding them and had to special order them all time.)

Can you believe I have never seen this show. I know you have talked about it over at B&N. I think this is on SyFy, right? For the longest time I didn't think I got SyFy so I didn't watch a lot of shows on there. Now that I know I have it I can try to catch up.

If you like it this much I really should check it out. Huh!?!

I have never seen this show. I've heard of it but never have seen it.

I too have not seen this show but have heard great things. I dont' have Netflix anymore but I do get SyFy. What season is it on and when does it come back?
I think I may be able to watch some old epsiodes in my Comcast on demand.
I like to try new shows!

Jaime, What see are you on?

Alexia, If you ever go through Captain Jack withdrawls the books are the ticket.

Buckeye, I haven't heard when the new season starts. I have heard that there will be one though. I'm really intrigued to see how they put the team back together.

Melissa, It's a great show that you need to watch now. It's actually on BBC America.

Zia, I'm not a big fan of SciFi for the most part. I generally prefer the Fantasy side, but this show is amazing and the books are too. If you ever get a chance to watch it let me know what you think.

Michelle, As I mentioned earlier it's on BBC America and so far there have been three seasons. Though the 3rd was more like a week long miniseries, and was it's best yet.

I am out of the loop on these but you make them sound wonderful!

I'm going to have to think seriously on getting these! I am having severe Torchwood withdrawals myself. I so hope it returns to TV, but I'm not holding out much hope =o(

Ryan- Season 1 is coming. I watched a few previews on BBC America's website and decided I needed to watch it. I just finished watching Jericho and then Jeremiah (I love Post Apocalyptic themes). The books sound great

I have not heard of this series. Thanks to your post, I think I may have found a series that I will like. Just put it in my blockbuster queue. But darn it, there is a "very long wait" for season 1.

Great review Ryan. I've been eyeing these up at the store too. I've been reading the Doctor Who ones and they're great. Not as good as the show, but still good :)