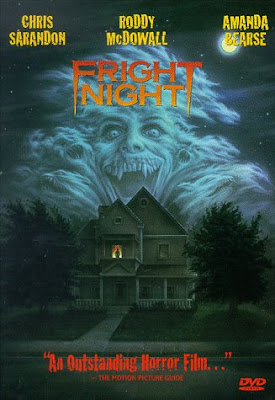 One of my favorite things about the month of October is it gives me the excuse to watch all my favorite scary movies all at one time. Well not really at one time, but you get the point.


This classic vampire film from 1985 isn't all that scary (anymore) but it is one of my favorite movies to watch once the weather starts to get a little colder and the nights start arriving earlier.


Synopsis From Back Cover:


Meet Jerry Dandridge. He's sweet, sexy, and he likes to sleep in late. You might think he's the perfect neighbor. But before inviting Jerry in for a nightcap, there's just one thing you should know. Jerry prefers his drinks warm, red - and straight from the jugular! It's Fright Night, a horrific howl starring Chris Sarandon as the seductive vampire and William Ragsdale as the frantic teenager struggling to keep Jerry's deadly fangs our of his neck. Only 17-year old Charley Brewster (Ragsdale) knows Jerry's bloodcurdling secret. When Charley can't get anybody to believe him, he turns to TV horror host Peter Vincent (Roddy McDowall), who used to be the "Great Vampire Killer" of the movies. Can these mortals save Charley and his sweetheart Amy (Amanda Bearse) from the wrathful bloodsucker's toothy embrace?


The synopsis never even mentions Charley's best friend "Evil" Ed Thompson. He is probably one of the most annoying but funny characters to grace the silver screen. He is played by Stephen Geoffreys and is such a complete spaz that you can't but help love him while he is stealing scenes from his costars. Once he is turned into a vampire by Jerry Dandridge he gets even funnier. You almost feel sorry for him once he has his final showdown with Peter Vincent.


The other character I love in this movie is that of Peter Vincent. Played by the wonderful Roddy McDowall, Peter is the perfect combination of intrepid vampire hunter and washed up actor. The clips of his own movies are hilarious to watch and remind me of the old Hammer horror movies. I would hope they got the name Peter from Peter Cushing who starred as a vampire hunter in many of those movies.

With all these movie posts you are doing, I have determined it's all your fault I'm craving some of my favorite scary (well maybe not scary) movies. You and the time of the year. I just watched Hellraiser, Children of the Corn is coming tomorrow. I wanna watch The Shining and Return of the Living dead too.

I loved this movie when it came out. I thought it was SO scary! Like you said, now not so much. Roddy McDowell was the best part of the movie, IMO.

I might go see Paranormal Activity Saturday. I've been hearing it's pretty scary, except one person said it wasn't so I guess I'll see!

Ah, Roddy McDowell! How we shall miss him in any future films!

I'm going to have to rent this one!

Ooh, this was the first horror film I ever saw. :-D I was about 12-13, had always avoided sleepovers that were guaranteed to watch scary films, and went over my friend's house for her birthday sleepover. They put on this, I held my breath, and absolutely loved it. Ever since then I've devoured every horror film I could get my hands on. :D

Zia, Children of the Corn was the first movie I saw that truly scared the crap out of me. I remember watching it at home, my mom had rented it, and I had to leave the house it scared me so much.

Michelle, Let me know what you think of it if you watch it. I've heard some good things about it and am debating going to see it.

Laurel, He was a fantstic character actor and wasn't used as much as he should have been.

Ceri, It is a fantastic movie even if some of the actors have had "unusual" careers after making this movie.

Ahhhh I have totally forgotten about this *goes to netflix.com and adds it to her cue*


Did you ever see "Witch Board?"

Oooh another one, Teen Witch?

Jaime, Witch Board was great. I have never gotten the image of the victim impaled on the fence out of my head. And Teen Witch is just adorable, so was the boyfriend.

Ooh I forgot about Witchboard. Off to add it to my netflix queue lol.

I think Peter Vincent came from Peter Cushing + Vincent Price. I loved this movie as a kid. There was only one thing I didn't get, even way back then. Does the sun rise on every side of a house?

The Vampire movies that scared me the most is Salem's Lot. When that kids was floating outside the window.....

Remember this movie from way back. Loved Roddy McDowell in almost everything he was in! What a great actor. Thank you for reminding me of so many great movies Ryan! *sigh*

I may need to put this on the rent list. I thought I had seen it, but your description of the movie is making me think maybe I havent. Either way i agree with you about the colder weather changing what you want to read and watch... I think there is a blog post in there.... hmmm...

anyway - Children of The Corn? Uhhh yeah.... scared the heck out of me as well and still find it creepy creepy.

For some reason I don't remember this movie. So, maybe I never saw it. How could I have missed this one? I do remember Witchboard though. I remember that one very well. My dad left me watch it with my step-sister (of the time). We were able to stay up late and watch it our selves with the living room to just us. We really enjoyed that.

I don't think I ever saw this movie. I planned to watch a scary movie this weekend but never got around to it. Maybe this week. Enjoy your scary movie watching!