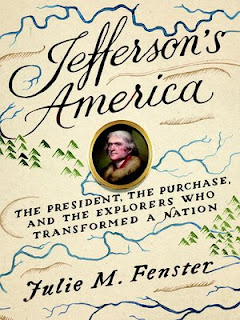 At the dawn of the nineteenth century, as Britain, France, Spain, and the United States all jockeyed for control of the vast stretches west of the Mississippi River, the stakes for American expansion were incalculably high. Even after the American purchase of the Louisiana Territory, Spain still coveted that land and was prepared to employ any means to retain it. With war expected at any moment, Jefferson played a game of strategy, putting on the ground the only Americans he could: a cadre of explorers who finally annexed the territory through courageous investigation.

Orchestrating the American push into the continent, Jefferson most famously recruited Meriwether Lewis and William Clark, who led the Corps of Discovery to the Pacific. But at the same time there were other teams doing identical work, jn places were it was even more crucial. William Dunbar, George Hunter, Thomas Freeman, Peter Curtis, and the dauntless Zebulon Pike - all were dispatched on urgent missions to map the frontier while keeping up a steady correspondence with Washington about their findjngs.

But they weren't always well-matched - not with one another and certainly not against a Spanish army of a thousand soldiers or more. The tensions and perils threatened to undermine Jefferson's goals for the nascent country, leaving the United States in danger of losing its foothold in the West.

When I first started the blog, a blog that I've allowed to languish for far too long, I wasn't reading that much nonfiction. I would pick up the occasional political or history book, but it was only one or two a year, and that may be stretching it a bit. If blogging has made a lasting positive change in my reading life, it's in an ever expanding appreciation for nonfiction. The types of books I'm now reading covers a vaster expanse of interests, and I now have a greater appreciation for American history and how much of it I really didn't know.

I of course knew President Jefferson's role in obtaining the Louisiana Territory, what middle school kid hasn't heard of the Louisiana Purchase? I knew of Lewis & Clark and the exploration they embarked on. What I didn't know, or at least forgot about, was everything going on behind the scenes. They didn't teach us about all the maneuvering behind the scenes, the clashes with the Spaniards, or all the obstacles that had to be overcome for our country to stretch from coast to coast.

Before reading this I don't think I understood how much of how we see ourselves as a nationation was crafted by Jefferson. Nor do I think I fully appreciated his role in creating the country we call home, and I don't necessarily mean in our size. I think he is pivotal in envisioning a nation that stretched from the Atlantic to the Pacific, but I think he helped craft our character and instilled in our collective psyche a need to see beyond our current borders, to always be reaching for what is next.  He helped mold the American sense of adventuring. After reading this book, my fondness for our third president has only grown.

I received this book for free from Blogging for Books, for this review
Posted by Ryan at 10:05 PM 5 comments: