10 of the Strangest Horror Movie Monsters

For the last two days I have not been able to get some of the odder horror movie monsters our of my head. These are all characters that for one reason or another have stuck in my head over the years and whether or not I like the movie they appear in or not these 10 "monsters" refuse to leave my brain. So I figured why not do a blog post on them, since this is after all the time for such creatures to wander around and slaughter to their hearts content.

Now Audrey from Little Shop of Horrors may not be the typical movie monster and to some may even seem like able, make no mistake though, this plant is blood thirsty and evil down to it's roots.

The stars of the 4 Critters movies, the Krites, are a viscous alien race of carnivores that turn into rolling balls of teeth and fur. This was never my favorite movie series, but the image of a young teenager being eaten through his abdomen has never left my mind since I had the "pleasure" of watching the first movie. 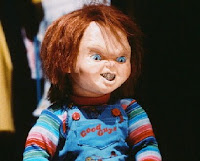 Now this little Good Guy needs no introduction. The star killer of way too many movies should be recognizable to all. Chucky, the star of Child's Play and it's sequels, is a vicious, possessed doll that loves nothing more than killing as many people as he can on his quest to become human once again. 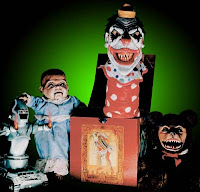 Carrying the toy theme even further I present to you Mr. Static, Baby Oopsy Daisy, Jack Attack, and Grizzly. They are evil toys who delight in killing throughout 3 movies, and one coming out sometime this year. They have faced off against Dollman and Toulon's puppets from the Puppet Master movies (featured later on in the list).

Forget Frosty the Snowman because Jack Frost would eat him up in 10 seconds flat. The star of two movies, Jack Frost, a serial killer mutated into a snowman loves to kill and does it in such funny ways.

Now as some as you may know I've been terrified of clowns for as long as I can remember so when this movie came out, it sort of made things worse. The clowns from Killer Klowns From Outer Space are actually sort of cartoonish but once they wrap you up in cotton candy in order to eat you, it's not so funny anymore. Just remember if you ever see one, pop it's nose, it's the only way to kill one of these colorful aliens.

One of the most annoying series of movies has to be the Lephercaun movies. Whether he is in the city, the hood or outer space, this evil lephercaun is just annoying and I hope they are done making them. I mean isn't 6 enough?

What more needs to be said than Giant Meat-Eating Rabbits. You can't get any better than this, so go watch Night of the Lepus, before they come and mistake you for a carrot. 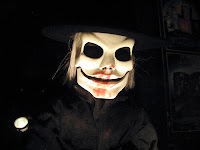 Now of all the movie monsters on this list, I think Toulon's puppets from the Puppet Master series have to be my favorite. The stars of over 8 movies these little guys are so much fun. They are the hosts for souls brought back from the other side Whether it's killing Nazi's and psychics or working on the side of good there is no stopping them. The picture I used is of Blade, but we can't forget Leech Woman, Pinhead, Jester, Tunneler, Torch, and Six Shooter 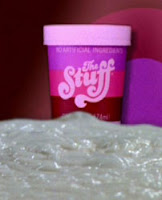 I saved the oddest for last. A white gooey substance the comes from the ground, sort of like The Blob, is sold as a junk food. Little does anyone know that The Stuff is in fact a living organism that eats the brain and takes over the bodies of those who eat it.
Posted by Ryan at 2:54 PM

It's funny how some stuff sticks with you. I remember being freaked out by Audrey in The Little Shop of Horrors, and Chucky-well, I still haven't seen those movies!

"Suddenly Seymour, standing beside me....don't need no makeup...don't have to preteeeeeeeeeend.....suddenly seymour....!" Oh wait...i mean, Audrey kicks butt. not so scary but definitely high maintenance mean...kind of like the girls i went to highschool with.

I love Little Shop of Horrors and Audrey was a demanding, creepy little er big thing.

I do have to agree with you on these creatures. However, there are movies her I do remember but I have not seen. I went through a phase of liking scary movies when I was really young, but the older I got, I got away from them. I am not one for all the gore and yuck. Then there are the movies like Saw and I refuse to watch those because there are people out there that could try that stuff. Oh well, they are all just for fun right...

The clowns have GOT to go...and killer rabbits? I always thought that was quite disturbing!

I have never seen any of these movies. I didn't believe my husband when he told me about the killer bunnies, though.

OMG! I'd forgotten about Little Shop of Horrors! :)

I am SO going to have to get that movie about the rabbits! It sounds so funny, even though I'm sure it wasn't meant to be. Sort of like Freddy vs Jason, which I laughed through in the theater. Ah, Chucky.

What about the worms from Tremors or Gremlins? I guess those movies aren't really that scary.

I almost included Tremors on here because they always reminded me of the Sandworms from the Dune Series.

Clowns and Chucky???!! What are you dong to me, thanks for the nightmares. You of all people with Clowns!

Buckeye, If you never watch the Childs Play movies I promise you are not missing a whole lot.

Michelle, To bad we couldn't feed thos girls to Audrey :-)

Zia, The creepiest part was the baby Audreys at the end of the movie.

Krista, I'm not sure that's a good idea. Remember, The Hills Have Eyes?

Melissa, Most of the movies I mentioned above are pretty silly now, well then too.

Michelle, I hate clowns with a passion but this movie was just so bizzare.

Carol, The killer bunnies are a riot.

Beth, Of all the movies The Stuff is probably the creepiest because it is the one movie that could actually happen.

Deb, Thankfully Chucky never dressed up as a clown.

That was a brilliant list but holy shiz! Too many clowns for my liking!

Chucky was so pathetic as a villain haha. Who doesn't laugh when he appears on screen?

Ooh, here's one for the strangest horror movie monsters - Robert De Niro as Frankenstein's monster. Now what the hell was that?