Queen of Hearts by Rhys Bowen 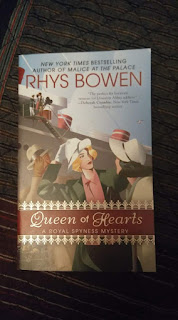 My mother, the glamorous and much-married actress, is hearing wedding bells once again - which is why she must hop across the pond for a quickie divorce in Reno. To offer my moral support, and since all expenses are paid by her new hubby-to-be, Max, I agree to make the voyage with her.

Crossing the Atlantic, with adventure in the air, and wealthy men aboard, mother meets movie mogul Cy Goldman, who J sits on casting her in his next picture. Meanwhile, I find myself caught up in the investigation os a suspected jewel Thief. Lucky for me, the lead investigator happens to be my dashing beautiful, Darcy!

Mother's movie and Darcy's larceny leads everyone to Cy's Hollywood home, where the likes of Charlie Chaplin hanging about and there's enough romantic intrigue to fill a double feature. But we hardly get a chance to work out the Sleeping arrangements before Cy turns up dead. As if there wasn't enough drama already...

What I'm getting tired of, are some of the reoccurring side characters. Georgie's mother, and her friend Belinda, are beginning to become one dimensional characters who don't ever seem to change. They are flat caricatures of money loving, sex craved women who are only out for themselves. The only time they seem to want Georgie around, is when it's beneficial in some way. Her maid Queenie, is just down right annoying at this point in time. Any comic relief she was good for, stopped working a few books ago. This go around she leaves for a while, and when she did, I was relieved to see her go. When she came back, it felt as if I had another kidney stone get stuck.

And I'm still frustrated with how the author treats gay men in her books. I get this series takes place between the two world wars, but enough already. Her gay male charcters are all either manipulative users looking for beards, or idiotic buffoons who are after money and sex. It's stereotyping at its laziest. Which I think is the crux of every issue I've had with this series. Outside of Georgie, and to a smaller degree Darcy, the reoccuring characters are straight out of central casting, and they never develop further. It's not enough to ruin my overall enjoyment yet, but I can see it doing so eventually.