One of my favorite movies to watch during the month of October is the 1963 version of "The Haunting", based off of Shirley Jackson's The Haunting of Hill House. I find this version to be scarier than the remake with Catherine Zeta Jones. I'm not sure if it's because it's in black and white, the fact the acting is better, or the brilliant way in which it's filmed (slightly off and at odd angles).

So here is the question I have. Which movie poster do you like better? 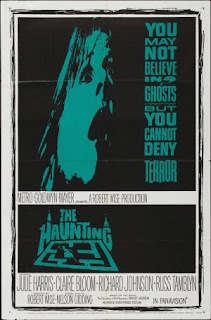 This is one of the original movie posters from 1963. It's stark and has that feeling of horror about it but I'm distracted by the words on the top. 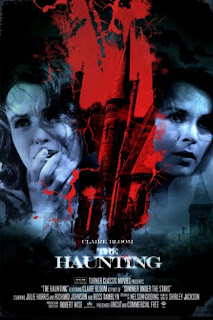 This is a new poster, for the same version of the movie, from 2009 that TCM had commissioned for their Summer Under the Stars series. I love this one. I has that sense of terror to it but it's simple in design without being boring. I also love the contrast in color.
So what do you think? Which poster connects with you more?
Posted by Ryan at 10:28 AM

I like the older one. I only saw the newer movie and it kind of sucked. But I finally reading the book for my bookclu this month.

Michelle, I love the book, it's one of my favorite ghost stories. I agree with the remake of the movie, it was horrible. I love this version though.

Hi, Ryan! I'm going for the older one. The girl's expression really connotes horror. I've been on the lookout for The Haunting of Hill House. I just hope I see it soon in our bookstores.

I have to agree with you that there are movies that the first go round was better than the remakes. I don't know if it is that I saw it that way first, the acting, or the scenery selections but the first was the best. There are many movies that should have never been touched to remake. But oh well, what am I to do? I will watch them and compare them as usual.

Ah, as you know, one of my very favorite novels, too!

Another reason that the first movie was better is that it actually tells the story from the book, and doesn't make up all sorts of ridiculous nonsense!

I think I like the first poster better - very 60s, especially with that mazelike thing at the bottom. The second is prettier, and I like the bit of the house that's showing. But implying that Claire Bloom is the star is just going too far!!!

Melissa, As Dulcinea said the first movie stuck to the book, where the remake took the idea and went for a double marathon run. The only good thing about the second movie was the house itself.

Dulcinea, I agree with the Claire Bloom comment but she was the actress they were featuring that day.

Definitely the second one!! :) The faces and color, nuff said.

Peter, Once you read the book you will love it. I would be interested in hearing your take on the psychological aspects of it.

Krista, Thank You. It's nice to know I'm not the only one.

I love the second Haunting poster! I really need to read the book...I know if Ryan says it's good, it probably is!