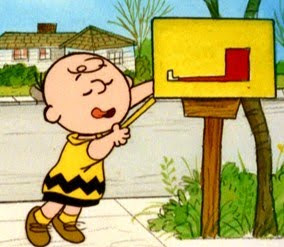 Mailbox Monday is a weekly meme hosted by Marcia at The Printed Page.
A bit of news on how I'm changing Mailbox Monday. I'm no longer going to provide links to books themselves. Most of the time they end up as broken links and don't work anyway plus I don't want anyone to think I'm working with/for the websites I link to. I'm also going to start including any CDs or DVDs I acquire during the week as well.
So with no further delay I present my acquisitions from last week.
First up are the two books I won from Kristen at Bookworming in the 21st Century.
I received the teachers edition of A Long Way from Chicago and A Year Down Under by Richard Peck in one volume.
And a ARC of Posh and Prejudice: A Diary of Chav Novel by Grace Dent.
I also received a bound galley of Primitive by Mark Nykanen from Bell Bridge Books during a BBAW giveaway.
Next up are the books I purchased from a used book store. I was in the mood for vampires so I bought 4 vampire novels.
Clan Novel: Gangrel by Gherbod Fleming in paperback
Clan Novel: Setite by Kathleen Ryan in paperback
Bound In Blood by David Thomas Lord in trade paperback
Desmond by Ulysses G. Dietz in trade paperback
I made a trip to the Dollar Tree Store and picked up The Righteous Men by Sam Bourne in hardcover for a $1.
Saturday night after work I went to Barnes & Noble to renew my membership and I ended up walking out with three books.
A paperback of The Secret of Chimneys by Agatha Christie
A hardcover of Knife of Dreams by Robert Jordan off the bargain table
My first Torchwood novel (I've been missing Captain Jack) Something in the Water by Trevor Baxendale in hardcover.
On my trip to Wal Mart I picked up the DVD of the 1980 version of Prom Night starring Jamie Lee Curtis for $5.
Posted by Ryan at 10:38 AM

Brooke from The Bluestocking Guide said...

I got primitive too!

I had a short one, and it's posted at:

Looks like your mailbox was stuffed last week. Happy Reading!

I don't know what Posh and Prejudice: A Diary of Chav Novel is but, with a title like that, I must have it!

... After some research I've discovered it's part of a series. How can I resist this opportunity to dive into a fictional world of chavland? (Especially when I've only got to walk down the street to bump into them). Mwahahaha - I'm such a snob but, whatever, I deserve to be - I'm working class. :P

I love the idea of including movies and cd's too! I've recenly removed the links I had showing the book's and prices on Amazon due to the new FTC regulations and not knowing what I want to do about that yet. :)

Sadly, I've never seen Prom Night! Hmmm - might have to go out and see about getting that one.

Congratulations on your contest wins! I received a copy of Primitive as well. Looks good!

Love vampires, so surprised I haven't heard of the Clan Novel books. Will keep an eye out for your reviews.

I didn't know you won Primitive too! Congrats!

Don't you love those $1 books at Dollar Tree?

Enjoy all your books!

WOW, Ryan, that's quite the list you have there! I hope you enjoy them all! Also, congrats on the wins :)