The Silence of Ghosts by Jonathan Aycliffe 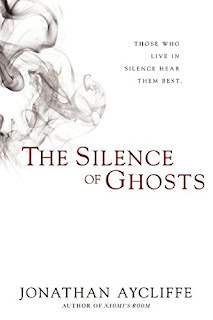 Dominic Lancaster hoped to prove himself to his family by excelling in the Navy during World War II. Instead he is wounded while serving as a gunner and loses his leg. Still recovering from his wounds and the trauma of his amputation when the Blitz begins, Dominic finds himself shuffled off to the countrysideend by his family, along with his partially deaf sister, Octavia. The crumbling family estate on the shores of Ullswater is an old, much-neglected place that doesn't seem to promise much in the way of happiness or recovery.

Something more than a friendship begins to flourish between Dominic and his nurse, Rose, in the late autumn of that English countryside, as he struggles to come to terms with his new life as an amputee. Another thing that seems to be flourishing is Octavia's hearing.

As winter descends, sinister forces seem to be materializing around Octavia, who is hearing voices of children. After seeing things that no one else can see and hearing things that no one else can hear, Octavia is afflicted with a sickness that cannot be explained. With Rose's help, Dominic sets out to find the truth behind the voices that have haunted his sister. In doing so, he uncovers an even older, darker evil that threatens not only Octavia but also Rose and himself.

There is something about this time of year that has me craving a good ghost story. Halloween merchandise is lining the store shelves, the serious decorators have already started on their homes, scary movies become habitual viewing, and my reading tastes get darker. Don't get me wrong, I love a good scare anytime of the year, but this is when I want to wallow in them.

Haunted house stories are my weakness, and I can rarely pass one up. Of my favorite books of all time, at least four of them feature a house I would do anything to visit in real life. I'm not sure how I stumbled across this one, but I'm damn glad I did.

Atmosphere is the key to a well crafted ghost story, and boy did this have a suffocating aura permeating the pages. It enfolds the reader, wrapping them in dread. It crawls in through the readers eyes, burrowing its way into brain tissue. As a reader, I found myself unable to put the book down, because I did not want Dominic, Rose, and Octavia to fade away, lost amongst the depair.

Despite a postscripted ending that I could have done without, and not fully sure I truly understood, if this is typical of Mr. Aycliffe's work, I can't wait to wallow around with him some more. Now, I just need the weather man to get with the program.
Posted by Ryan at 11:05 PM 2 comments:

What Happened by Hillary Rodham Clinton 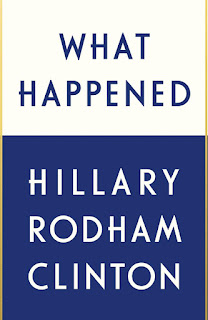 For the first time, Hillary Rodham Clinton reveals what she was thinking and feeling during one of the most controversial and unpredictable presidential elections in history. Now free from the constraints of running, Hillary takes you inside the intense personal experience of becoming the first woman nominated for president by a major party in an election marked by rage, sexism, exhilarating highs and infuriating lows, stranger-than-fiction twists, Russian interference, and an opponent who broke all the rules.

Fair warning, a little of my political side comes out in this "review".

Frankly, I don't know how to objectively review this book. Even if I could somehow manage to be objective, how do you "review" a first person narrative of an election that is still tearing our country apart? I voted for Sec. Clinton in both the Democratic primary, and in the general election. What's more, I would do it again with a joyous heart.  But right now, my heart is broken by the wasted opportunity this country had to be lead by someone of her caliber. Instead, we have a man in the White House who is currently blaming hurricane survivors in Puerto Rico for their own suffering, while he's playing golf. He's poking at the leader of North Korea, his Justice Department is now saying it's okay for employers to fire you for being gay, and Dreamers are just months away from being deported. I told you I couldn't be objective about this.

In What Happened, Sec. Clinton is pretty frank in how she sees the mistakes she made, the fake email controversy and Director Comey's role, divisions on the left, and Russian interference combined into a perfect storm she just couldn't figure out how to navigate. This could be my own biases showing, but I think she's right. Throughout the book, Sec. Clinton lays out her case and does it without whining.  She accepts blame when she should, but doesn't hold back in holding others accountable when it's appropriate to do so.

Sen. Sanders used right wing propaganda to weaken her with his supporters. He painted a corrupt narrative of her that some voters, primarily younger who didn't really know her, bought into. They didn't understand the primary process, couldn't believe she was beating him in the primary, so they bought into this whole notion of the primary being stolen. The fact that it was the same primary system that allowed then Sen. Obama to beat her, was immaterial to their anger. They labeled her corrupt, badgered her supporters online, and a few in WI, PA, and MI threw hissy fits and either didn't vote, or voted for Dr. Stein, who has her own ties to Russia.

The letter Comey wrote to Congress days before the election truly was the final nail in the coffin. She is right when she says the momentum was on her side, but that the letter stopped it cold. It was an unprecedented act of interference in our election system by the FBI. His whole manner was suspect, from his initial statement to that final letter, he behaved in a most unseemly  manner.

The scope of Russian interference is staggering. Giving the Trump campaign opposition research, hacking the email systems of the DNC and John Podesta including the planting of fake emails, creating fake news stories, orchestrating anti immigrant rallies on US soil, taking out political ads on social media, employing thousand of social media trolls, stirring up racial tensions online, and only they know what else they did. The investigation is for from over, but what's already known should chill the blood of every American.

If you couldn't tell by my tone, I'm still a little bitter about the election. I wish I could find the grace and humor that Sec. Clinton shows in this book. Her pain and disappointment are on full display, but so is her warmth and compassion for those she feels she let down. This is a deeply personal memoir, and if it hurt for me to read it, I can't imagine how it felt for her to write it.

It's obviously a book by someone who is never going to run for office again, it's far too candid for that. And that's what hurt the most. Granted I've admired her for years, but seeing this openness from her cements the idea that regardless of how or why it happened, the missed opportunities that were only possible with her in office are a national disgrace.
Posted by Ryan at 11:29 PM 4 comments: