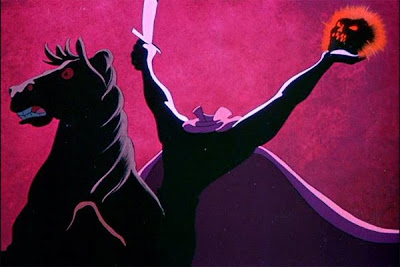 Well since we are now in October I decided to feature over the next 4 weeks some of my favorite Halloween related fictional characters. I figured I would start with least scary and work my way up from there. So for this week I decided to go with The Headless Horseman from the Disney movie, The Legend of Sleepy Hallow.
I thought I would maybe include the versions from the Johnny Depp movie, Sleepy Hallow or even from the story The Legend of Sleepy Hallow by Washington Irving, but I decided to just stick with this one for now. This is the version that comes into my home every Halloween and captures mine and my son's imaginations.
For those who are not familiar with the basic story I will try to briefly catch you up. A gangly school teacher name Ichabod Crane moves to a small rural village in New York and soon falls in love with a local girl, Katrina Van Tassel. Ichabod has a rival for Katrina's attentions in Brom Bones who is a jealous man.
One night at a Halloween party, Brom notices that Ichabod is rather superstitious. So he tells the story of The Headless Horseman and rattles Ichabod so badly that he is shaking in the saddle on his way home. It is a journey that he never completes and no one is ever sure of what happens to him.
Now whether, in the movie at least, you believe the Horseman is a figment of Ichabod's imagination, Brom in a costume, or is in fact a monster on the lookout for a head, it doesn't matter. He scares you anyway. He is only on screen for a short time but he steals the show and you will never look behind you again on a cold Fall evening and not think you are being followed.
Posted by Ryan at 12:05 AM

I love the disney version....I might have to look for that movie again.

Perfect character for this time of year. And that's the version I think of first, too.

This is great! There is a Sleepy Hollow about 45 min. to an hour away from me in the valley below Ligonier PA. I always think of this movie when I drive up to the mountains this time of year to look at the beautiful leaves. I love this post!

If you would like to stop by I have my FFC up now. http://melissa-melsworld.blogspot.com/

I've never seen the Disney version, but love the one with Johnny Depp. I like your new header picture

The Disney version of this story scared the hell out of me when I was little. The Johnny Depp version kind of disappointed me. But I will agree with you that the Headless Horseman is one of best scary fictional creatures ever created.

Oh, I love the one with Jhonny Depp, as well, but have never seen the disney version either! I will have to look for it. As always, fun post!

Ichabod Crane...lol, reminds me of a Frasier episode...