The Phantom of Manhattan by Frederick Forsyth 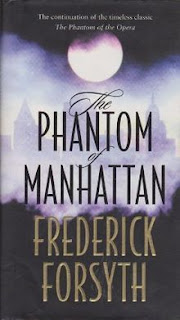 It is 1906, and few in the teeming metropolis of New York City have heard of, let alone seen, the hugely wealthy man who controls so many of their lives. Few, too, would have heard of the extraordinary events that took place at the Paris Opera house more than twenty years before-a story as dramatic as any of the operas themselves: a tale of Love and murder and passion, the heartbreaking legend of the Phantom of the Opera.

I'll admit to having loved this book at one point in the time. Designed to be a sequel to Andrew Loyd Webber's musical, The Phantom of the Opera, it tells a rather convoluted tale of greed, family secrets, and unrequited loved. It captured my imagination from the beginning, but it's been at least 12 years since I'd read it. When I picked it back up the other day, while I wasn't as enchanted as before, it still managed to pull me in with it's operatic version of soap opera goodness.

The Phantom, now known as Erik Muheheim, escaped Paris with the help of Madame Giry, and has managed to raise from rags to riches in New York City. He has built a business empire to be envied, but never lost his love and fascination with Opera. His denial of a box seat at The Metropolitan Opera house, forces him to build a grander rival, and that sets the stage for the rest of the book. Christine is hired to sing, and when she shows up with her young son, the secrets come out in the open, and nobody will live the life they planned on from that point on.

The Phantom of Manhattan mixes old and new characters, seamlessly weaving them with secrets, love affairs, and enough tragedy to create a tale Susan Lucci could have sunk her teeth into.
Posted by Ryan at 11:24 PM 5 comments: