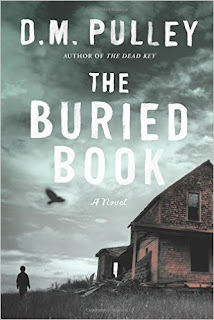 I would like to thank Lisa of TLC Book Tours for the opportunity to read/review this book.  Please visit the tour page to read more reviews.
Posted by Ryan at 11:37 PM 12 comments: 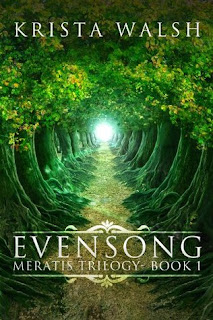 Author Jeff Powell wakes up to find the impossible has happened.  He is within his own novel - summoned into the fictional world of Feldall's Keep by a spell he didn't write.  One the House enchantress hasn't figured out how to reverse.

When the villain he's been struggling to write reveals himself, unleashing waves of terror and chaos, Jeff must use more than his imagination to save the characters he created - and the woman he loves.

Trapped within a world of his own creation, he must step outside the bounds of his narrative to help his characters defeat an evil no one anticipated, even if he must sacrifice his greatest gift.  In the end, he has to ask: are novel really fiction, or windows into other worlds?

As a kid, I fell in love with Fantasia and all the promise it held.  For years I would play a game in my head where every character I cam across, be it from books, movies, TV shows, or some other medium, lived in one giant fantasy world.  They formed organizations, opened businesses, built relationships, and fought the bad guys, who happened to be on a neighboring planet.  What all that meant, was that these characters existed outside their creator's mind.  They lived entire lives that were not influenced by their creator's arbitrary decisions.  That last concept is why I fell in love with this book, and why I can't wait to read the rest of the trilogy.

When Jeff wakes up in the world he thought he created, he's just a tad bit confused.  At first he thinks it's an elaborate prank, but quickly decides he is simply dreaming.  He plays along with the characters he though he invented, humoring them when they tell him they brought him there to solve some major problems.  Of course they lecture him a bit on the way he is handling some of the plot points, and quickly inform him that what he's writing is only a small fraction of their daily lives. Over time, as he gets to know them, to understand their history, he realizes that he is in fact in the world he created.  When he is faced wit the death of one of his "creations", a death he did not plan, his world is turned upside down.

To be blunt, I couldn't stand Jeff in the beginning.  I thought he was just a tad bit too egotistical, but he's an author who loves creating worlds, so what else should I expect from someone with a godlike complex.  And for the most part, his characters modeled that attitude.  As he matured, he softened up and I grew to like him.  And oddly, as he became less rigid, so did his characters.  As they turned to face a common threat, they grew as a unit, and really began to understand each other.  The one relationship I never understood or even liked was with the "love of his life."  It made no sense in the structure of the story, and I kept waiting for her to be killed off.  My wish was never granted, but I'm keeping my fingers crossed for the next two books.

I still don't think Jeff, nor his characters, know whether Jeff dreamed them up, or if he just tapped into their world, influencing their actions when he could.  I don't think I have a strong opinion on it either, and I'm okay with it.  I'm just looking forward to what happens next. 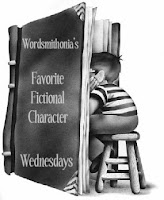 Given which character I'm featuring this week, what I'm about to say is going to sound rather odd.  I'm not a huge Star Trek fan.  I don't hate it, but I would never actively seek it out to watch.  I'm sure it's been at least 15-16 years since I've seen an episode of any of the TV shows, and the only reason I watched the first Star Trek movie with Chris Pine, was because of Chris Pine.  Like any good kid of the 1990s, I got into Star Trek: The Next Generation more than the original, but if I missed a few episodes or a whole season, it was no skin off my nose.  So you are probably trying to figure out why I would be featuring a character from the Star Trek universe, so I'll tell you.  For whatever reason, boredom probably, I recently downloaded the Star Trek: Timelines game, and now I can't seem to stop playing. The universe is dealing with several temporal anomalies, and every single character who ever existed, along with every single version of the character, are now all smashed together. Dr. Beverly Crusher is not one of the characters on my crew as of yet, but I'm hoping I get her at some point in time. 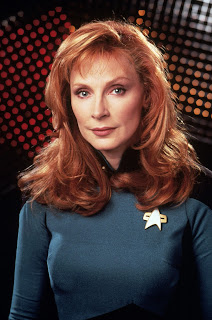 Of every character created for the franchise, she is my all time favorite. She suffered loss after loss in her life, and she always found the strength to come back and beat it.  She lost her parents at a young age, then her husband dies, leaving her to raise a son by herself.  She pours herself into raising Wesley and becoming a Starfleet Commander.  She is a strong independent woman, and she really cemented herself as my favorite when she went to bat for Hugh, the young Borg that was rescued from his crashed ship.  When those around her, including Captain Picard, wanted to use him as weapon, Dr. Crusher defended him, and did everything she could to make sure he had every chance to become his own person.  Time and time again, crisis after crisis, Dr. Crusher proved to be a deeply talented officer, willing to put the needs of others before her own.  I also thought that of all the main characters on the show, she was the one who seemed to grow the most over the years.  By the end of the series, she was a woman & officer who was not only completely comfortable in her own skin, but supremely confident in who she was, and what she had to offer.