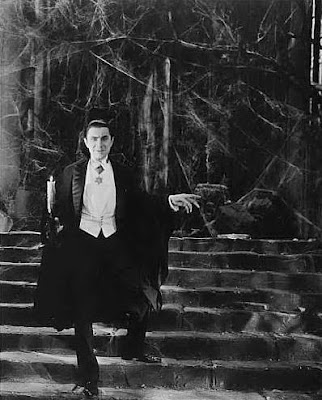 Well, how could I do a month of Halloween FFC posts and not include Dracula in the mix.
When I think of vampires, there is a pantheon of the elite that reign above all others. Carmilla Karnstein, Sir Francis Varney, Miriam Blaylock, Lestat de Lioncourt, and above them all stands Count Dracula.
How can you not love the this character in any incarnation. He is dark, mysterious, and there is just something so noble and regal about him. Plus how can you forget the almost sexual pull this character has over people. There is something so sexy about him that it's hard for you to get his image out of your mind. From his first appearance in Bram Stoker's novel Dracula all the way through the over 161 movies, Dracula is a star and he will never let you forget it.
Now I used the picture of Bela Lugosi as the Count from the 1931 version of "Dracula" directed by Tod Browning. I used this picture because this is my favorite movie version of him. There is just something so dark and menacing about him in this movie that I don't think anyone has been able to duplicate. I still get chills every time I watch him bend down and feed off of Lucy and Mina.
Christopher Lee comes in a close second for movie adaptations but he still doesn't hold a candle to the brilliant performance by Bela Lugosi.
Posted by Ryan at 5:19 PM

I think the real-life Dracula, Vlad Tepes, was hot (if you disregard his penchant for impaling). And I liked Gary Oldman's Dracula, too.

I'm a huge fan of Gary Oldman's performance as Dracula in Francis Ford Coppola's rendition of the movie. He's definitely got that sensual and sexual pull you were talking about in your post, especially in the scene where he first sees Mina on the city streets.

The aged vampire movies. These are the best along with the monster and frankenstein movies. Very Very good pick this week.

I have not done my FFC yet but I will do it later this evening.

I have to admit that I was not a Dracula fan until recently. After finally reading Stoker's original story, I'm now hooked - it was SO GOOD! I still have not seen any of the movies though. Is the Bela Lugosi version true to the book? Might have to give that one a try ...

Dracula has to be my all time fave. I don't think I could choose who played Dracula the best though. That's a tough decision.

I actually haven't seen very many adaptations of this story. The only ones I can recall are the Gary Oldman version and the newish BBC version (the guy who played Dracula in that one creeped me right out!).

Dracula by Bram Stoker is my favourite book of all time. I love this character and although I like the old movies I have to admit that my favourite adaptation is Francis Ford Coppola's Dracula - great movie and I loved Gary Oldman. Great post!

I lurv the wampires. I also liked Gary Oldman as Dracula--that was a very romantic version of the book.