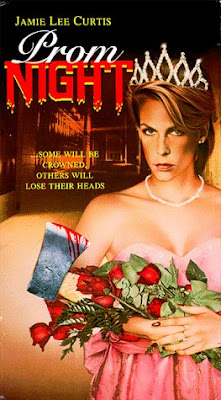 I had never seen this movie before so when I saw it a store for $5 I snatched it up and figured even if I only watched it once it was still cheaper then going to a movie. So I brought it home and let it sit around for a few days and almost forgot I bought it.

Well the other night I was cleaning up a bit and found the DVD amongst a few books so I figured why not watch it. I didn't get around to it until I was ready for bed so I put it in my portable DVD player, put the earphones in, and enjoyed a wonderful 80s movie.

The opening scene has the creepiest game of hide and go seek that I have ever seen. These kids are playing in a abandoned building and the seeker yells out "The killers are coming, The killers are coming". It's shot wonderfully and has the perfect sense of menace to it. Well needless to say one kid meets the end of her life and the others swear themselves to secrecy.

Skip ahead 6 years later and the older sister (Jamie Lee Curtis) of the dead girl is dating one of the kids who caused her death and they are getting ready for the Senior Prom. One by one they are getting rewarded for their past behavior.

I figured out who the killer was pretty early in the movie despite a red herring that is fed to us on a silver platter. Half way through the movie I began to doubt myself and shift the blame to someone else but that quickly went out of my head and I became convinced I was right the first time.

If you like cheesy 80s slasher/horror movies (the way I do) then this is a must see. Try to get to it before Halloween if possible, that way your brain is already wanting to be scared.

Four Hamilton High School seniors have been hiding the truth of what happened to ten-year-old Robin Hammond for six long years. But someone saw what they did ans i preparing for revenge--a prom night killing spree. Hooded, masked, and wilding an axe, he'll stalk his prey in the dark, empty halls, striking when his victims are alone. And just as the spotlight falls upon the newly crowned king and queen, the killer will show everyone what his favorite game to play is...
Posted by Ryan at 11:33 AM

I haven't seen this one in some time. I remember it being awesomely creepy. I did, however, just watch Hello Mary Lou: Prom Night II. Another good ne

Definitely a pass for me. We were just talking about scary movies today at work. I don't watch them.

Definitely a pass for me. We were just talking about scary movies today at work. I don't watch them.

Man. I haven't seen theat movie in YEARS!! I'm a huge fan of anything 80's. Especially the cheezy horror/slasher movies!!