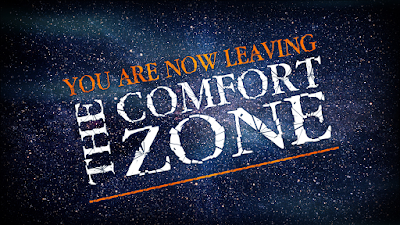 I've been pondering this whole notion of comfort zones when it comes to reading, though I think we could apply this to any sort of media that we choose to consume. At first, I didn't even want to admit that I have them. I felt embarrassed by the idea.
After I thought about it some more, I started to look at my reading patterns. In reality you could call what I've done over the last few years as being in holding patterns. If I wanted to aim some judgement at myself, I'd even go as far as calling them ruts. What I started to question is whether or not I would equate those patterns/ruts as comfort zones. And I can admit that while both my more recent "ruts", Golden Age mysteries and M/M romance, give me comfort, I don't think they qualify as actual comfort zones, at least not in the way I choosing to interpret the whole concept.
Oddly, it's actually my romance reading that even has me pondering this whole esoteric concept. In my romance reading, I tend to get sucked into series, more than I do standalone novels. Though I read quite a bit of those too. What I've found myself doing in certain series is the issue at hand. Anytime a book has featured a relationship that is either M/M/F, M/F, or F/F, I've skipped over those books. At first I wanted to just shrug it off to not wanting to read sex scenes that involve women, despite the fact that I skim through most sex scenes anyway. Then I decided I have to see M/F relationships all over the place in every other form of media, that I don't need to read romances about it. That really didn't explain my skipping over the other two types of relationships though. That sort of left me with no other explanation than they make me uncomfortable, so I needed to figure out why. And while some of it is the sex scenes and the fact I have heterosexuality shoved in my face on a regular basis, I had to admit something I'm not all that proud of. It's partly because as a gay man, I don't understand those types of relationships. It's the same reason I've tended to skip over M/M romance that has a transman as part of the couple. Since I don't understand how they work, I chose to not read about them. I chose to not invest my time in something I didn't understand, nor cared to.
After I realized that, I had to take a hard look at myself. I began to wonder what other books, or even movies, I was ignoring because I didn't care/wonder about the perspective and story being told. What books were I ignoring because I don't understand the culture, religion, ethnic background, sexuality, disability, or world view that was at the heart of the story being told? That isn't something I can easily answer. All I can do is try to be more aware in my choices, and do my damndest to broaden my exposure. It's time to start pushing beyond my comfort zones, and maybe someday eliminate them altogether.
For the record, I'm now reading a F/F romance novel that is the fourth in a series I absolutely love.
Posted by Ryan at 8:57 PM 2 comments:

I Have Something to Tell You by Chasten Buttigieg 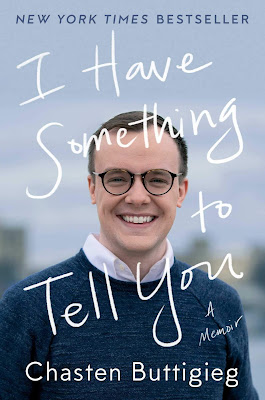 If you even remotely paid attention to me on Facebook, you would know who my favorite candidate was during the Democratic primaries. Going into them, I actually had three favorites: Buttigieg, Castro, and Harris.  They were the three individuals that I had been paying attention to for years, and will always hold a lot of admiration for. In the beginning, the three of them were pretty much grouped together, with no real order of preference. For that matter, I would have been in heaven had anyone found a way to set up triumvirate government, with the three of them sharing power.

As the primaries slogged on, Pete started to edge ahead of the other two. And by the time he dropped out, he was my first choice. I won't go into the policy issues that pushed me his way, though I could list quite a few, this just isn't the place to do that. Stylistically, he was also the one I was able to connect to the most.  Again, since this isn't the real point of this post, I'll skip over that as well.  Which leaves us with the deeply personal connection I felt to him and his campaign, and his husband, Chasten, had a lot to do with that.

As a gay man, who struggled with acceptance as a kid, seeing an out man have a real chance at the White House, was something I never thought I would see in my lifetime.  Seeing my lived experience as a gay man, in someone who could easily be President of the Untied States, was nothing short of life affirming.  Getting to know him, as well as you can through the media and his own book, was something I would have loved to experience when I was younger.  The visibility and example he lives, gives our youth a glimpse of what it means when we say, It Gets Better.

The truly joyful part of Pete's campaign, was getting to see and "know" his husband, Chasten. If you have ever followed Chasten on social media, how he comes across there, is the same way he comes across in his memoir. His intelligence, loving heart, and wit are on full display. He doesn't pull punches, but he wraps them in both understanding and humility. He owns up to the mistakes he made, and seems to be someone who truly knows who he is. He comes across as humble, but with the understanding that he and his husband represent a sense of hopefulness for the future in terms of LGBTQ+ acceptance in a country that doesn't always feel welcoming, and oftentimes dangerous.

When I first saw their Time magazine cover, with the words First Family, I cried. If I had seen that as a kid, it would have been everything to me, like seeing Norm on the first season of The Real World or watching the 1993 LGB March on Washington. I hope this book  an be that touchstone for some of today's youth, just looking to know they aren't alone.

Age Sneaks Up On Us 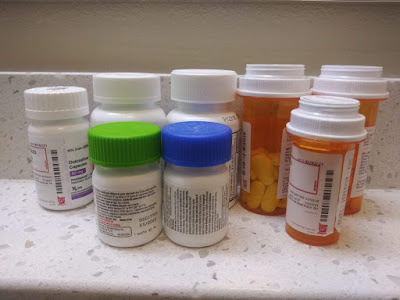 On August 15th of this year, I'll be turning 45. Its not something I think about all that often. Hell, half the time I need to stop and think for a few seconds when someone asks me for my age. When I do think of it, its more in terms of where I thought my life would be by this time; normally I would married with kids, and a hell of a lot more financially stable than I am. The older I get, I'm not even sure how I'm supposed to feel. What is approaching 45 supposed to feel like? I don't think I feel any different than I did in my 30s, or even in my 20s, at least not mentally. I'm definitely more mature in some of my choices, though some like budgeting are still an issue. But, I can't say I normally notice that much of a difference. I can definitely tell my body is aging, and fattening, but it's hard to remember what my body felt like 5 years ago, let alone 10 or 20.
Life has a funny way of reminding us just how old we are getting. Some are ongoing, like I've been trying to get used to the idea I probably need bifocals. I'm just not ready to pulls the trigger, and admit defeat. Others just slap you in the face. I'm in Kansas City for work, staying in a hotel, and like everyone else I pack all my essentials to take along with me. I am also one of those annoying people who unpack everything once I get to the hotel. This time around, as I'm unpacking, I notice all the damn pill bottles I'm pulling out. All I can do is sit there staring, wondering when I got this old. I used to pack 8 pairs of shoes, not 8 medicine bottles. I only brought one pair of boots with me, and that's it. I unpacked 8 freaking bottles, and not one is a supplement or a vitamin. The powers that be need to design disclaimers about what getting older really means. Maybe then I wouldn't be so dismayed that instead of packing multiple pairs of shoes, I'm now taking pharmacies along with me.
Posted by Ryan at 9:26 PM 4 comments:

Email ThisBlogThis!Share to TwitterShare to FacebookShare to Pinterest
Labels: My Life, My Photos, Personal

We Need to Stop Blaming the Victims 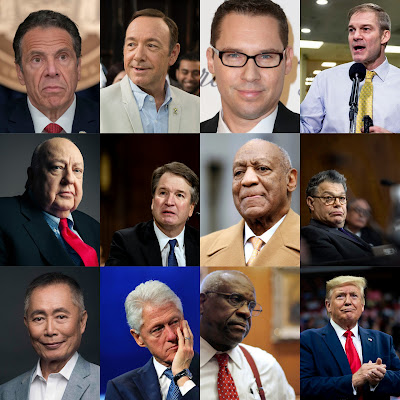 I've started this post off with about 17 different opening lines so far, but none of them have been able to get across my deep seated frustration at what I see happening to victims of sexual harassment and assault. Frankly, frustration is probably too mild of a term. Seething anger may be a more apt description of how I feel. All too often, even when the victims are believed, they are still blamed for what happened to them. They are told they shouldn't have put themselves in that situation, they should have dressed differently, they should have had less to drink, they simply misunderstood, or a myriad of other bullshit excuses, designed to shift the blame onto the victim, instead of the perpetrator. How about we start holding those who can't keep their hands to themselves, responsible for their own behavior?  Let's stop making excuses. Stop saying boys will be boys, as if rape and harassment are inherent to being a man. Stop saying it's locker room talk. Quit gaslighting victims. Why do we place so much of the responsibility and the guilt onto those who were exploited and hurt, all the while doing everything we can to protect the one responsible for the damage?
I could split this post off into several different tangents, including how when the victim is man, we treat them even worse, but I won't, because it all comes down to the same thing. We need to stop acting like the victim is responsible for bringing down these powerful men, and women, and start blaming the perpetrators themselves for ending their own careers.
We need to do better.
We have to do better.
Posted by Ryan at 9:16 PM 1 comment: