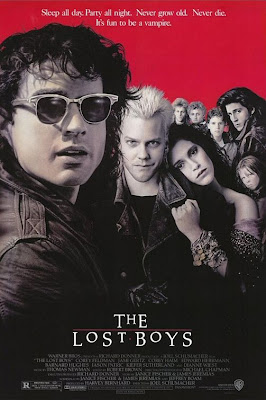 My roommate has a theory about what makes a good movie. He thinks that if a movie's opening sequence involves water the movie will be good. In this instant he is dead on in his thinking.


The soundtrack is dead on and used effectively. The theme song of the movie seems to be "Cry Little Sister" (youtube video) and is used throughout the movie. Different snippets of the song are used to frame certain frames and seems to capture the essence of those particular scenes.


The cast is spectacular. Jason Patric, Diane Wiest, Edward Herrmann, Kiefer Sutherland, Corey Feldman, and Corey Haim all star in the movie. You can't get better than having both Coreys in a movie, well maybe if you added Rob Lowe in at the time. Speaking of Rob Lowe I always wondered why Sam (Corey Haim) has a poster of Rob Lowe pulling his shirt up on his closet door. I wonder what was being implied back then.


Jason Patric and Corey Haim play the sons of Diane Wiest who moves back in with her father after a divorce she didn't feel like fighting. Once their the boys meet new friends and start to have fun. In Michael's case (Jason Patric) he meets a beautiful girl who is otherwise engaged and is brought into the gang by it's leader David (Kiefer Sutherland). Sam meets the Frog brothers (one of who is Corey Feldman) at a comic book store and the quickly bond (which may be to strong of a word) over vampire comics.


Little does Michael know that his new friends are trying to initiate him into a gang of vampires controlled by some unknown individual. Once Sam discovers what is happening he calls in the Frog brothers for help and chaos reigns for the rest of the movie.


For anyone who enjoys a wonderfully written, strong vampire movie I strongly encourage you to watch it.


Synopsis From Back Cover:


Sam and his older brother Michael are all-American teens with all_American interests. But after they move with their mother to peaceful Santa Carla, California, things mysteriously begin to change. Michael's not himself lately. And Mom's not going to like what he's turning into.
Posted by Ryan at 9:54 PM

Nice one! I forgot this was a vampire movie... great blast from the past and now I want to rent this.... :)

This movie ended up being banned from my house and my cousin's house by my mom and aunt. My cousin and I watched it repeatedly for about a year and a half whenever we would see each other. We had it all memorized and would bring pictures of our favorite Corey (Haim, of course) and put them up on the walls during our sleepovers.

I agree, It is totally one of the best movies of the 80s. And the whole Rob Lowe thing, well..he was pretty darn cool back then.

That's funny- I put The Lost Boys in my vampire post about a week ago. I was in love with Jason Patric for sometime.

The granpa is hilarious!

Never seen it, but I may have to test that theory about water in the opening sequences of a movie.

Wow, I remember loving this movie. I haven't watched it in years though. I wonder if I would still enjoy it as much now.

I love this movie! I had a little crush on Jason Patric back in the day because of this movie. :-)

This is an all time awesome movie. I do have to agree. From the cast, acting, and the whole idea of it for the vampires. I wonder if this was the beginning to all the wonderful things we see with vampires. Great post!

That seems like a totally random theory. I haven't seen this movie, though.

This is one of my all time favorite movies, too! I have never heard that saying about the water in the beginning of a movie. I'll have to test that theory... :) Very cool review, Ryan!