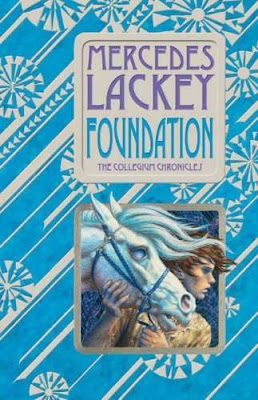 This book came out a while ago and I always meant to pick it up every time I went to the bookstore. Mercedes Lackey is one of my favorite authors and her Valdemar books are amongst my favorite books of all time. So when this book came out I was so excited that I started bouncing in my chair as I was reading about it. Then life set in and I didn't pick up until recently.
This is the first book of a series that takes place between the Last Herald Mage trilogy (my favorite) and the stand alone book, Burning Brightly. Now for those of you who aren't familiar with the Valdemar books that probably won't make much sense to you. Just know that it takes place before most of her other Valdemar books.
The book takes place while the new Heralds Collegium is being built along with a new Bardic and Healer Collegiums. The main protagonist is a typical example of what can be found throughout the Valdemar books. Mags is a young man who has been living, working as a virtual slave in gem mines. The description of his daily life is monstrous and this causes you to take an instant liking to him. Well that and the fact that he is generous and kind without thinking about it. That he in very small ways tries to look out for the younger children and thinks about others more than most kids in his situation would.
The rest of the story is typical (by which I mean wonderful) of these books. Young man is Chosen by one of the wondrous Companions to become a Herald in the service of Valdemar (the kingdom they live in). The young Herald Trainee goes to Haven (capital city) to start training and is caught up in a situation that tests their skill and courage. I say typical because this is the way a lot of the books start. There is a reason for it though, it works for the type of characters that Heralds are. Heralds have to be tough, resilient, and kind. Now not all the Heralds come from a miserable background but would that make a good story?
I'm looking forward to the next book in the series as I always love to read the history of a Kingdom I want to live in, about the Heralds I want to be like, and about right trumping wrong.
Synopsis From Back Cover:
Mags had slaved at the gem mines for as long as he could remember, completely unaware of how unusual his paltry existence was--until some strangers on huge white horses forced their way past the mine owners and carried him away to Haven to become a herald Trainee.
Suddenly the whole world opened up for him. He was warm and well fed for the first time in his life, and he had Dallen, his Companion, who seemed more miraculous than an angel. There was political upheaval in Valdemar's capital, for the ancient was of training heralds--the system of one-on-one mentoring that had been successful for centuries--was failing. Many veteran Heralds had died in the wars, and there were too many Trainees to go around. A Herald's Collegium was being built, and many thought it was wrong to train Heralds in classrooms the same way the Bardic and Healer Trainees were schooled. But dissent among the Heralds was not the only discord in Haven, for the court had been infiltrated by foreign "diplomats," who seemed to be more interested in seeding discontent than in actual diplomacy...and Mags seemed to be the only one who'd noticed...
Posted by Ryan at 12:08 PM

Odd that I would read your post about Mercedes Lackey today. I JUST came from the library and at some point browsed through a very large section of her books (there are SO many!). I read the Firebird a while ago but nothing since.

These books do sound great! I remember reading you character Valdemar and you talk of these alot. This one sounds great as well. May have to look into them here at some point.

I read the first three Valdemar books (in the original publishing date chronology), but then sort of faltered when I discovered the true extent of the series. SO MANY!!! How does she do it? I love her Elemental Masters series the best...perhaps because I started reading when there were only 3 of them out? At any rate, I agree - Mercedes Lackey = one of my favorite authors ever. :)

I really need to read something by Lackey. People seem to love her.

Great review. I just finished reading Gwenhwyfar and loved the writing. I didn't want to put it down! It was the first book I've read by Mercedes Lackey...sit down before you read this next part....but I've actually owned the Mage Storm series for about ten years :-o Can you tell me if I should be reading her other books before getting into these?

Logan, They are some great books, Firebird is a good book.

Melissa, Once you start them you will be hooked.

Celia, The Elemental Masters are good too.

Carol, You won't be dissapointed

Jackie, I'm one of those who like to read things in order (chronologically) that way I'm able to understand all the refrences. In all the Valdemar books there is a timeline so I would go by that.