10 Kids I will Not Babysit

I love kids. They are the only people I have infinite patience with but even I have to draw the line somewhere. There are just some kids that are down right bad or even dangerous and why would I want to put myself in a precarious position. Now some of the kids I mention aren't deadly but all of them are creepy and would give me nightmares if I had to watch them while their parents were out on the town.

As a side note I never realized how much Stephen King doesn't like children, 4 of the finalists on the list came from his imagination.

First up is Charlene "Charlie" McGee from "Firestarter". Can you really blame a guy for not wanting to be around her? Who wants to be turned into ash because you sent a cranky kid to bed? 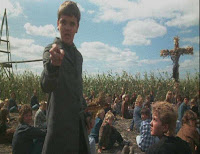 Now I know this isn't one kid but a group of kids but there was no way I could leave them off the list. The children of Gatlin, NE from "The Children of the Corn" have got to be some of the scariest around. Not only do they seriously dislike adults but they hang out with some creepy guy called "He Who Walks Behind the Rows". Now what kind of idiotic name is that?

Now I know that Cole Sear, from "The Sixth Sense", is neither dangerous or evil. However, I really don't feel like babysitting a kid who talks to dead people and animated, electronic teddy bears. 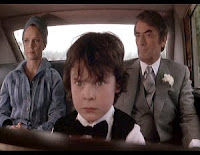 I'm not even sure there is enough money in the world for me to watch Damien Thorn from "The Omen". Not only is his father the Big Evil One, but he really doesn't get along with his mother and has a habit of being attacked by other primates.

Now just because Danny Torrance, from "The Shinning", is psychic that doesn't mean he is a bad kid. I just get creeped out by the whole redrum thing and besides do I really want to ask his father for my fee?

Then there is adorable Gage Creed from "Pet Semetary". Such a sweet young child until he died and his father had to go and bury him in the wrong plot. Now he is a scalpel wielding murderer who took out his mom and tried to eliminate his dad. I don't want to be next. 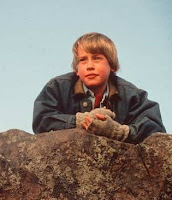 Young Henry Evans from "The Good Son" isn't quite old enough to shave but ever since the death of his brother he hasn't been the same. I'm just not sure I would feel safe enough with just the two of us in the house.

Regan MacNeil from "The Exorcist" isn't bad she's possessed and she is sticking to that excuse. Between the yelling, screaming, and head turning I would never get a moment of piece while her mother is out shopping. Besides getting pea soup off your clothes is such a hassle and Mrs. MacNeil wouldn't pay the dry cleaning bill. 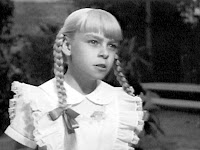 If for some reason I were to babysit Rhoda Penmark from "The Bad Seed" she would have to leave the tap shoes at home and would not be allowed near anything flammable. Bad things always happen when she gets mad and I'm partial to my life. 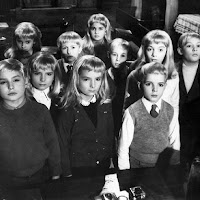 The children of Midwich in "The Village of the Damned" are just creepy as can be. Who wants to be around kids that can make you crash your car into a wall or shoot yourself. Of course with these kids you may have no choice but to watch them.
Posted by Ryan at 9:00 PM

Oh man Gage *shiver*. He is so disturbing and Reagan from the exorcist? Yikes! After watching Children of the Corn yesterday, the kids are just as creepy now as they were when I was little.

Great list! Damien from the original Omen movie...definitely the kid with his own table in the cafeteria at school...

Ahhhhh.... Damein always freaked me out and reagan from the exorcist.... gah!

Great post. And a nasty group of youngsters. The pictures really creeped me out. I'm not much of a horror fan. I just can't take the nightmares!

I literally let out a small scream as I scrolled down and saw Damien. Back! Back! Devil child!

No money in the world would make me babysit Regan MacNeil - didn't that Burt guy watch her for a few moments and get flung out the window?

I have to add, as cute as she is, I'd probably leave our Carol Anne Freeling from the Poltergeist films too - 'The Beast' man follows her around way too much for my liking, and her parents probably wouldn't pay extra for the effort of trying to keep her getting sucked into a closet with her toys!

I think I've only seen three of these. I'm loving your Halloween posts, though.

I think this is the reason I don't watch scary movies (and especially scary movies with kids in them). I really don't need to be afraid of children. :) Your posts are downright chilling (which is your intention, I think?) these days... :)

Zia, I think of all the kids Gage is the worst cause he is the cutest normally. You look at his adorable face and just don't see it coming.

Logan, I love the pic of Damien I was able to use. He is looking so evil in the picture, which he truly is.

Sheila, Regan isn't a bad person, she is just misunderstood. You feel so bad for her and at the same time you don't want to be around her.

Alyssa, Sorry if the pics end up giving you nightmares. I grew up on horror movies so I don't get scared to easily anymore. The Orphange was one that scared me quite a bit though and I almost but Tomas on the list but I ran out of room.

Ceri, For some reason I completly forgot about Carol Anne, thank you for reminding me of her. The other reason I woudn't want to watch her is Tangina would end up popping out and she freaks me out for some reason.

Carol, Thank you so much for that...I love doing them because it's letting me revisit some of my favorite scary movies.

Celia, Sorry, but I love Halloween. From now till January me brain switches gears and I totally get into the holidays. If it makes you feel better I will probably over do the Christmas posts as well.

Ryan, I have to agree with you on these children. I never even thought about looking at the movies from this angle. I forgot about most of these children though. I have seen these movies but that has been ages ago. What what a memory rush. I got the chills with just about ever picture. But I do have to say I did love Firestarter. I would love to have her as my friend, not enemy-friend. She seemed like a nice little girl, with a hot temper. lol.

Her head spins Ryan... she freaks me out! LOL

The Good Son is such a chilling movie. That scene on the cliff!

PS - I just noticed you live in Wichita. What high school did you go to? My brother went to Northwest. I'll be around at Christmas!

PS 2 - My husband illustrated the Zombie Chicken Award which you have in your sidebar. Check out his daily drawings at danielsdailydrawings.blogspot.com

Lenore, Thank you for stopping by and saying hi. I live in Wichita now but only since 1994 so I didn't go to HS here. It's a good city though and I'm mainly happy here :-)

Ryan -
New reader here I found a link for this post on Kittling books.

This is an interesting post because when I was a kid we lived in a house that was 100+ years old. A pre-Victorian with 17 rooms. My mom painted it black. Go figure my dark inklings now and as a child...

When my folks would hire baby sitters to stay with us - due to our creepy kid nature and knowing all the little quirks about the house we would make a plan and scare the living crap out of them. We had an absolute blast.

At one time mom and dad came home and found the sitter hiding in the closet... we went through quite a few in those days.... lol.

What about the kids from Spider Baby? I think they would be fun to babysit....