Defenders of the Scroll by Shiraz 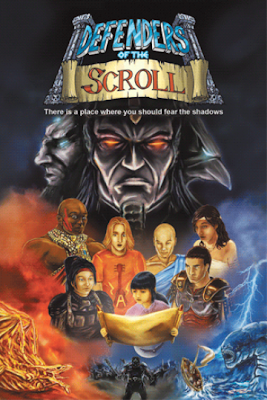 Far away in the realm of Mythos, an evil entity has broken free of it's prison to darken the land. However, entrusted with her father's magic scroll-the only hope for the realm-young princess Dara summons six heroes from different times and places to defend her: a hardened Roman legionnaire, a swift Japanese samurai, a mights African warrior, a fiery Amazon archer, a spirited Shaolin monk, and a guitar-playing high school student named Alex.
Now constantly on the run from an army of Shadow Warriors, the teens must endure perilous journeys and face frightening monsters-while trying not to fight with each other-as they struggle to fin the mysterious Hall of Shadows.
I was surprised by how quickly I read this book, once I started it I didn't want to stop reading. I was intrigued from the start and now I'm stuck in limbo waiting for the next installment so I know what happens to Dara, Alex, and the others.
I found this to be a wonderful story of Good vs. Evil. When the King of the realm faces a threat only he has a chance in stopping, only to fall victim and end up as a hostage, it is up to his young daughter to make things right once again.
Using a scroll her father enchants with his own magic she is able to summon help, though it's comes in a form that is not quite expected. Alex, a modern day high school kid, has nothing else on his mind that juggling a budding music career and the desire to pass his last exam. When he is suddenly sucked into another realm, he has no idea what's in store for him.
With the help of five other teenagers who are summoned from one of his books, he makes a valiant attempt to protect Dara and stop the evil spreading throughout the realm of Mythos. While nothing quite goes as planned they manage to overcome every obstacle in front of them. Even when tragedy strikes all is not lost and the battle will continue.
Posted by Ryan at 3:50 PM

I heard about this but it wasn't my type but I thought of you! Guess I was right, glad you liked it, great review. I am reading more paranormal than I used to, maybe I'll branch into fantasy!

Hey, Ryan! This one sure does sound like a book I'd enjoy! I love it when you just can't stop reading and you zip right through books. I also hate the waiting game when there that good! I'll definitely be watching for this book!

P.S. I just wanted to let you know I changed my contest a little bit--I want there to be one winner for each book, sorry! But that's better right a better chance of winning!

Oh and P.S.S. There's another giveaway going for a Signed copy of Warbreaker if you want to enter the Link is listed on my blog sidebar. Dude, I entered cause I'd love to win a signed copy!! Good luck to you if you enter, and don't forget to tell'em who sent you..LOL! Good Luck!!

I love books like these! Haven't read this one yet though.

nothing beats Good Vs Evil stories, especially when there's a Samurai involved.

Seems like I've heard of this book. Is it an older one? It sounds like an entertaining read.