The Haunting of Timber Manor by F.E. Feeley, Jr. 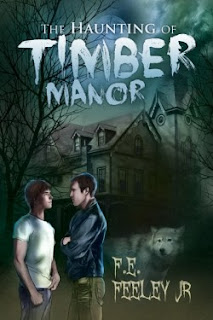 While recovering form the recent loss of his parents, Daniel Donnelly receives a phone call from his estranged aunt, who turns over control of the family fortune and estate, Timber Manor.  Though his father seemed guarded about his past, Daniel's need for family and curiosity compel him to visit.

Located in a secluded area of the Northwest, Timber Manor has grown silent over the years.  Her halls sit empty and a thin layer of dust adorns the sheet-covered furniture.  When Daniel arrives to begin repairs, strange things happen.  Nightmares haunt his dreams.  Memories not his own disturb his waking hours.  Alive with the tragedies of the past, Timber Manor threatens to tear Daniel apart.

Sheriff Hale Davis grew up working on the manor grounds.  Seeing Daniel struggle, he vows to protect the young man who captured his heart, and help him solve the mystery behind the haunting and confront the past - not only to save Daniel's life, but to save his family, whose very souls hang int he balance.

You guys know I love a good Gothic, haunted house story.  There is nothing like getting lost in an house that plays with your head, forcing you to see things that aren't there, turning you into a blithering cry baby, huddled in the corner of the smallest closet you can find. Timber Manor is as devious and mind warping as Hill House, and almost as violent and blood thirsty as Belasco House.  It's a house full of the most damming family secrets.  They are the kind of secrets that slither through time, wrapping the present inhabitants in a shroud of despair and death.  It's the kind of house that I've always wanted to live in, but I've never been sure if I would have the spine needed to do so.

Daniel is one of those guys, that as soon as they appear on the page/screen, you instantly love them. He is the guy you want to root for, the guys you pray survives until the end of the movie.  In Hale, he finds the perfect partner, someone to love and watch over him, and the guy who will protect him from the buried past roaring back through time.

The author did a freaking fantastic job at framing his story, creating a fully realized world that wasn't hard to picture in my head. This is one of those books that I would do almost anything to see adapted to the big screen.  The entire time I was reading it, every single page appeared in celluloid glory in my head.  I'm pretty sure my wishes here won't ever be realized, but a boy could dream.
Posted by Ryan at 10:06 PM 3 comments:

So needless to say, September was not the month that things got back to normal around here.  I had every intention of throwing myself back into blogging, then they demoted my assistant manager, and I'm stuck working 76 hours a week right now.  That appears to be what my life is going to be like for the foreseeable future, so not looking forward to it.

What I am looking forward to is Halloween, and I'm going to make a commitment to post something Halloween related everyday, right up to the big day itself.  Some days it may be a simple Youtube video of a favorite Halloween song or Halloween cartoon.  Other days will feature a book review or a movie review.  And I'm going to try my damnedest to get some Halloween themed Favorite Fictional Characters thrown in there for good measure.  And I'm not going to kill myself getting it done, but I feel as if I need to make a 2016 list of sexy vampires.