Under This Unbroken Sky by Shandi Mitchell 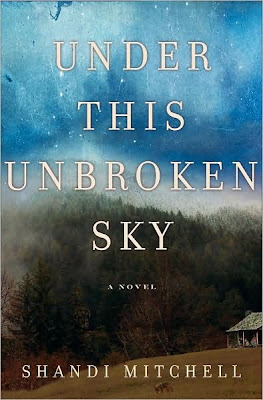 From the Publisher:
Spring 1938. After nearly two years in prison for the crime of stealing his own grain. Ukrainian immigrant Teodor Mykolayenko is a free man. While he was gone, his wife, Maria, their five children, and his sister, Anna, struggled to survive on the harsh northern Canadian prairie, but now Teodor-a man who has overcome drought, starvation, and Stalin's purges-is determined to make a better life for them. As he tirelessly clears the untamed land, Teodor begins to heal himself and his children. But the family's hopes and new found happiness are short-lived. Anna's rogue husband, the arrogant and scheming Stefan, unexpectedly returns, stirring up rancor and discord that will end in violence and tragedy.
My Brief Thoughts:
I had this book lying around for a few weeks before I picked it up. Once I did I was ashamed of myself for waiting as long as I did. I found it to be beautifully written. Each word was chosen with care in order to express exactly what it was the author chose for us to know or understand. I could clearly picture in my mind how it would be to live on the Canadian Prairie, how much strength and will one needed to posses to survive.
As far as the story itself I found it to riveting. The family dynamics were well fleshed out and thoroughly developed. Watching a family turn on itself was believable and horrible to witness. The ending horrified me for no matter how bad things got, I never thought it would end in death.
I encourage anyone and everyone to read this piece of art. It will be well worth the time.

Great review Ryan! I will definitely be putting this on my "to read" list. It sounds like a great read!

I am so glad you posted this. I received a copy through Barnes and Noble's first look book club and I was having "reader's block". It's sat and I really think now is a better time then any to have at it and read. The Blogoverse's opinion I hold high :)

Ryan, I'm glad you loved it, too. What a great book. I could only gush to the author on B&N. This is their best First Lok pick yet. Great review. I hope I can write one to do the book justice

Jaime...You better get started on it right away.

Deb...As eloquent as you are I'm sure you will have not problem.

Jaime/Deb...I was going to say something on the First Look site but since I hadn't really visited it earlier I was sort of lost in all the post I hadn't read yet.

Looks good...hope to get to soon!

Another great pick. This one sounds really interesting! I am putting this book in for my Morning Meandering.

Sheila, thank you. You are the best!

Received this book but haven't read it yet. Will have to move it to the top of my TBR pile, as you make it sound so good! Love it when a book is riveting! Thanks for sharing!

Alexia, enjoy. I don't think you will be dissappointed.

Great review! I read this also and loved every word. I'm looking for other books that is similar.
Maybe Shandi will write another one??
Natalie :0)

I loved this book. The writing was beautiful. Wonderful review!