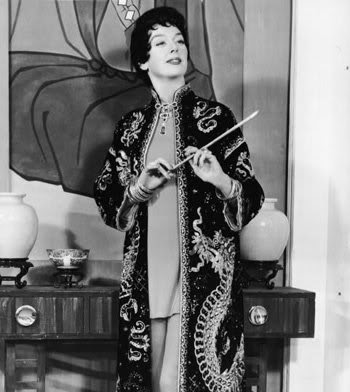 I first met and fell in love with Auntie Mame in high school. I was home from school (don't remember why) and happened to turn on A&E. I didn't turn it off for the rest of the day. They were running a movie marathon of "Auntie Mame" starring Rosalind Russell and I was hooked. I must have watched it 3 times that day. My mom by the way thought I was completely crazy but let me do it anyway.
Now this post isn't about the movie or the book. It's about why I loved this character when I first met her and why I still do to this day. It's about the way Auntie Mame connected with a part of me that was craving something I didn't even know I was missing.
This was the mother I always wished I had. I envied little Patrick with a vengeance. Why should he get the perfect (in my view) mother when I didn't get one. I just didn't think it was very fair. Now I didn't give a second thought to the fact that Mame was only getting custody of Patrick because his father (her brother) had just died. Who cared about the reason? I was green with envy.
Mame was the ideal liberal, free thinking woman of her day. She believed in experimental education, couldn't stand snobbery, and was so shockingly outspoken it took your breath away. Even when she lost all her money and lost Patrick to a boarding school all in the same day she rose to the challenge and rebuilt her life anew. She was brazenly resilient and I admired her for it. She never stayed down and never let those around her fall down.
Here was an individual who took control. A woman who wouldn't let someone else dictate to her the way she should live her life. A loving mother who cared for her charge and made sure he grew up to be a man any mother would be proud of. A woman who took in a single, pregnant women in a time when the idea was scandalous.
I could go on and on about parties, fox hunts wearing boots that don't fit, jingle bell bracelets, world travels, and writing books. There was so much to this woman that I still am amazed every time I watch the movie, read the book (Auntie Mame by Patrick Dennis), or even watch the musical with Lucille Ball as Mame.
She has been my inspiration in so many things. In the movie she says "Life is a banquet and most poor suckers are starving to death." I believe that's true and I never want to be one of those "suckers". For that is what Auntie Mame Dennis did. She Lived, Lived, Lived.
Posted by Ryan at 10:35 PM

I've only seen the musical with Lucille Ball, but will definitely have to check out this version as well! I remember Auntie Mame and what a great character she was, and who could forget that great quote? Nice post!

Alexia, Thanks for stopping by. It's greatly appreciated. I hope you get a chance to watch the Rosalind Russell movie. It's fantastic.

Great Post, Ryan! It's awesome how characters can have such an influence in someone’s life. I'll have to look into the movie now, thanks for sharing.

So you went old school. Very cool. Not to many people talk of the old movies anymore. I can do this with you. I use to watch the AMC channel when it was strickly the black and white movies along with the singing and dancing ones (I loved these).

My favorite character from these was Phil Davis played by Danny Kaye in White Christmas. (opposite of Bing Crosby.) Not that Bing wasn't awesome in this movie, along with the woman, but I just loved Danny. I started looking for his movies at night when the old ones were played. But his character was carefree and loved to enjoy himself.

Just thinking of this I will have to look for the old movies again. I use to love sitting up at night watching all the old singing and dancing movies. I don't think I have done this since, well wow, since before my son was born - over 10 years ago now. Wow how time flies.

The movies then were wonderful, the dancing and singing, and the plots were well defined. Also, you don't have to worry about language or sexual content in them. Life seems so much more simpler in the movies.

Thanks again for the stroll down memory lane. I am going to have to look through the AMC channel to watch some movies and maybe look for them at the local Block Buster.

Krista/Melissa -- you guys should definetly check the movie out. The great thing is that it is in color but has that old hollywood feel to it. The character of Mame is so outrageous and over the top but so human and real at the same time. I wish I was writing this post now when I'm feeling better, but I think it would be dishonest to go back and redo it. Mame for me was always larger than life. She was someone you would want as a mother regardless of how good your own mother was. I'm probably going to curl in bed and watch this tonight just because I've been thinking about it since I posted last night. I hope you guys get a chance to watch the movie then let me know what you thought.