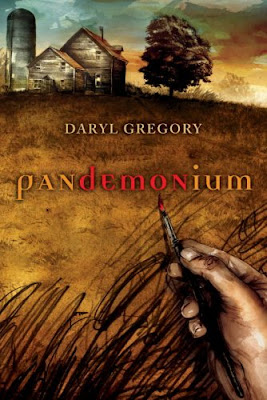 I first read this Crawford Fantasy Award winning book back in February for the SciFi/Fantasy board on the Barnes & Noble book club site. I instantly fell in love with it but was not able to give it the complete attention that it deserved. I finished reading it then but I knew my mind wasn't focused on it so I was missing quite a few gems. I just now finished reading it for the second time and boy am I glad I did.
This book blew me away. It is a combination of urban fantasy, post apocalyptic, SciFi, and psychological thriller peppered with pop culture references galore. The result is a fantastic mosaic artfully put together by this fist time novelist.
In a nutshell the basic plot line is this, in the 1950's demons started possessing people sometimes with fatal results. The "demons" fit into personality archetypes found throughout pop culture.
The story follows Del Pierce who as a boy was possessed by the demon known as the "Hellion" think Dennis the Menace to the nth degree. The Hellion was exorcised, or so everyone thought. As a adult Del ends up going back home to his family to recuperate after a serious car accident and realizes he may not be alone after all. What follows is a rather touching and surprising journey to heal himself and become "whole".
I don't want to give away the ending to much but I will say about half way through the book you should start getting an idea of what is about to come. What Del/Hellion slowly discovers will surprise you but the further along you go the more you realize that this was really the only way the story could go. That everything you had read before led up to this moment of self discovery and acceptance.
Along the way the reader will be treated to an appearance by author Philip K. Dick, a priestess who will remind you of a Irish songstress, and encounters with many pop culture icons (think Captain America).
This is the blurb from the back cover:
It is a world like our own in every respect...save on. In the 1950's, random acts of possession begin to occur. Ordinary men, women, and children are the targets of entities that seem to spring from the depths of the collective unconscious, pop-cultural avatars some call demons. There's the Truth, implacable avenger of falsehood. The Captain, brave and self-sacrificing soldier. The Little Angel, whose kiss brings death, whether desired or not. And a string of other, ranging from the bizarre to the benign to the horrific.
As a boy, Del Pierce is possessed by the Hellion, and entity whose mischief-making can be deadly. With the help of Del's family and a caring psychiatrist, the demon is exorcised...or is it? years later, following a car accident, the Hellion is back, trapped inside Del's head and clamoring to get out.
Del's quest for help leads him to Valis, an entity possessing the science fiction writer formerly knows as Philip K. Dick: To Mother Mariette, a nun who inspires decidedly unchaste feelings: and to the Human League, a secret society devoted to the extermination of demons. All believe that Del holds the key to the plague of possession-and it's solution. But for Del, the cure may be worse than the disease.
Posted by Ryan at 10:02 PM

I loved this book as well! One of the coolest Demon books I've ever read, anyway! I loved the back story of the demons as much as the here and now story. Awesome read.

Great review, by the way, Ryan!

I look at the cover and think it looks beautiful... I dont know if the book is a fit for me, but when you list it as a top read so far this year... I have to think about it some more. :)

Sheila, If you do end up reading it I think you will be pleasently surprised. I know that bookstores shelf it with SciFi/Fantasy but it is so much more than that. It is a real look into the human condition that is so well written that you won't forget any of it. The word "Demon" may be too strong of a word for what this book is about. It's not like The Exorcist in any way shape or form.