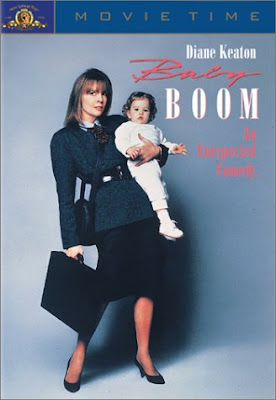 I watched this classic from 1987 for the millionth time last night (OK not really, probably more like the 15th time but you get the point) and I found myself laughing just as hard as I did the first time.
For those of you who have never seen this movie I will give you a brief synopsis. Diane Keaton plays J.C. Wiatt a powerful executive, nicknamed "The Tiger Lady", on her way to making partner with a New York consulting firm. She has a comfortable, if maybe passionless, relationship and her life seems to be going great. Then a lat night phone calls changes everything.
The phone call is from England informing her that her cousin and his wife died in a automobile accident and that she has inherited something from them. She is all excited thinking it's money when it fact it ends up being their baby. She doesn't know what to do. She can't have a baby, a baby will mess everything up. So she takes care of her for a few days just until she can take her to the adoption agency. Now if that actually worked movie would be over and I wouldn't be here talking about it. Needless to say she can't bring herself to do it once she is there and ends up keeping baby Elizabeth.
Now how is she supposed to juggle being a mom and making partner? Being 1987 is doesn't work out very well. Her boyfriend, played by Harold Ramis, leaves her. Her protegee, cunningly played by James Spader, takes advantage of the fact she is so distracted at work and takes over her biggest account. Her boss, played by Sam Wanamaker, informs her she is being passed over as partner. So what is a strong, independent women to do? She quits, buys a farm house in Vermont with an apple orchard, and attempts to start over.
This is were the movie gets really good so I'm just going to gloss over the plot here. Everything goes wrong for her once her and baby Elizabeth are living in Vermont. Her well drys up, roof needs to be replaced, she has no social life and feels she is becoming an old maid. She eventually, in a fit of desperation, unloads on her handyman then faints.
When she comes to she is in a doctor's exam room and ends up spilling her guts out to Sam Shepard thinking he is a doctor. Which he is, but not for humans, he's a Vet. Needless to say she is humiliated and storms out. In the mean time she had been making apple sauce for Elizabeth from the orchards on her property. One day she brings some into the general store and finds herself selling a few jars to some tourists from The City.
The rest of the movie is about starting over. Starting her own baby food company, Country Baby. Starting a new relationship with Dr. Jeff Cooper. Starting to become involved with the community that she had been living in but not taking part in.
Once she thinks she has everything figured out her old boss tells her that a company wants to buy her out. So does she sell the company and move back to New York? Does she in the end say no, stay in Vermont, and stay with the doctor? Well watch the movie and find out.
This is one of my favorite movies from the 80s and is well worth watching. I think it still accurately portrays the way some women feel that they have to make a choice between career and family. Hopefully this is a rather good example that tells everyone that they can have both and that they don't have to make a choice. So please watch this movie. I promise you won't be disappointed.
Posted by Ryan at 10:24 AM

Oh, I loved this movie! I so wanted to move to Vermont and live in a small town.Not sure that I wanted the baby part though,lol. And I love Harold Ramis, even though he only had a small part.

Loved this! Every time I eat applesauce I think of her in her kitchen with all those apples!

I think I'll have to go dig this out of my DVD drawer and watch it again!

Ah and an evil James Spader. Really, he was so perfect at being evil in the 80s!

I love this movie as well! Cool review, Ryan!

Wowza! Thanks for the 80s flashback. Haven't seen this one in years.. now it's time to again!

PS I am originally from Southwest Kansas myself :D

Deb and Krista I'm glad you like this movie as much as I do. It probably has to be my favorite Diane Keaton movie.

Beth, James Spader was awesome as the bad guy throughout the 80s.

Jamie, watch it and enjoy. Where in KS?

I don't know if you seen, Ryan, but I left you a comment over on your BBAW post as well.

I enjoy this movie too...

Krista, I sure did I just visited your blog and left a comment I hope you enjoy it as much as I am.

LOL! LOL! I do remember this movie. It was amazing. I loved when she went to Vermont and bought the farm. That was the best part of the movie and the connections she finaly let happen between her and the baby, she really became a mom. Not to give any spoilers on the movie, but at the end I still get worried on what she will do with the company, that is a lot of money they offer her but it has become a loved part of her life. What will she do???

Great pick Ryan. I haven't thought on this movie in a looong time. It is a classic!

I ended up ordering off of half.com!

Ryan...another thing in common! This is one of my favorite movies! Diane Keaton is a riot and the premise was great. I let my friend borrow it and she hated it. I guess there's no accounting for taste...lol!

Jamie... Western Kansas, espeically around Dodge and Garden, has changed quite a bit or so I'm told by people from Kansas. I've only lived in Wichtia since 1996. Oklahoma, Minnesota (the best state in the union), Oregon, Washington, California, and Texas being my other living locations. I like it here but it's taken a lot to get used to.

I love this film, it's really, really good!

Nikola, Thank you so much for dropping by. I stopped by your blog and tried to leave comments for you but the word verification doesn't display all the way nor is there a box to type it into. I enjoyed what I read and hope you stop back in here and see this comment.