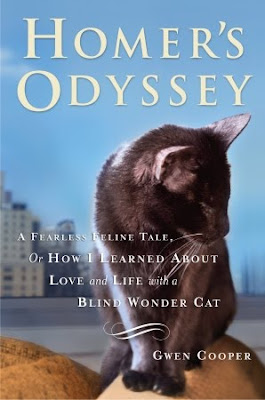 OK, this is not a book review for the simple fact I've not read the book. Actually I hadn't even heard of it until this morning. I was in the car on my way to the DMV and I was listening to NPR which is normal for me. The Diane_Rehm Show had just started and the first hour was all about this book.
Now I'm not a cat person. I would never go out and adopt a cat but at the same time if one showed up on my doorstep I wouldn't turn it away either. So with that being said I'm seriously thinking about reading this book. If it was about blind puppy I would have been in tears and at the store today buying the book. As it was I was smiling the whole time I was listening to the story.
What I did want to do was post about the book here because I know there are a lot of cat lovers out there that would love to read this book. I will paste the synopsis of the book from the publishers website at the end of this post. If and when you do read the book please come back and let me know what you thought. I have a feeling everyone will love it and that I will end up reading along with all of you.
From the Publisher's Website:
The last thing Gwen Cooper wanted was another cat. She already had two, not to mention a phenomenally underpaying job and a recently broken heart. Then Gwen’s veterinarian called with a story about a three-week-old eyeless kitten who’d been abandoned. It was love at first sight.
Everyone warned that Homer would always be an “underachiever,” never as playful or independent as other cats. But the kitten nobody believed in quickly grew into a three-pound dynamo, a tiny daredevil with a giant heart who eagerly made friends with every human who crossed his path. Homer scaled seven-foot bookcases with ease and leapt five feet into the air to catch flies in mid-buzz. He survived being trapped alone for days after 9/11 in an apartment near the World Trade Center, and even saved Gwen’s life when he chased off an intruder who broke into their home in the middle of the night.
But it was Homer’s unswerving loyalty, his infinite capacity for love, and his joy in the face of all obstacles that inspired Gwen daily and transformed her life. And by the time she met the man she would marry, she realized Homer had taught her the most important lesson of all: Love isn’t something you see with your eyes.
Homer’s Odyssey is the once-in-a-lifetime story of an extraordinary cat and his human companion. It celebrates the refusal to accept limits—on love, ability, or hope against overwhelming odds. By turns jubilant and moving, it’s a memoir for anybody who’s ever fallen completely and helplessly in love with a pet.
Posted by Ryan at 11:16 AM

By the way, Ryan, we gave you an award. You can check it out at
http://teensreadandwrite.blogspot.com/

Okay, now I'm sniffling already just reading the synopsis! Definitely too sad for me to read, but sounds awesome!!!

Oh, this sounds really good and heart warming! Thanks for sharing, Ryan!

I am a dog and cat lover and now I have to look for another book...darn!

This looks good but I bet it's heartbreaking, so I won't even think about it!! Pet stories make me cry no matter what :(

Alyssa, thanks for the award and from the interview I heard of the author this might actually be a fun read.

Beth/Deb, I don't think it has a sad ending, just a sad begining.

Kirsta, you are more than welcome. I'm seriously thinking of buying it.

Booktumbling, Let me know what you think if/when you read it. Thank you so much for stopping by.

Tears in my eyes, of course! My love of cats is probably as profound as my love for books! This sounds like a great one. I will definitely put it on my list!