The Secret of My Success --- Movie Review 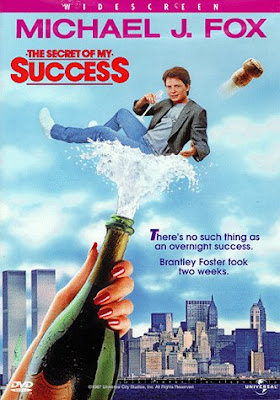 I have been on a weird 80s kick lately so I've been watching a lot of the movies I loved from that decade. The latest one to grace my DVD player was "The Secret of My Success" starring Michael J. Fox.
I have owned this movie for years but it's not one I play very often. I think I'm going to have to rethink that because I spent most of the movie laughing out loud, which annoyed my son a little bit. I sometimes forget how funny Michael J. Fox was and how boyishly charming he could be.
The basic premise of the movie is this, I will take it off the back cover.
Can a kid from Kansas come to New York to conquer the business world and maneuver his way from the mailroom to the boardroom in a matter of weeks? Michael J. Fox proves it can be done in this very funny lampoon of corporate business life. Fresh out of college, he's determined to climb New York's corporate ladder in record time by masquerading as an up-and-coming executive, even though he's really the new mail boy. However, Fox's plans begin to go awry when the boss's wife falls in love with him and he falls in love with a junior executive, who also happens to be the boss's mistress.
Now that I've typed this little blurb I can honestly say it in no way does this movie justice. Fox plays Brantley Foster, who moves to New York City with the promise of a job. The first day he shows up he is laid off due to the company being acquired in a hostile takeover. He then goes from company to company and being rejected over and over again. He is either too qualified, under qualified, and finally is told he needs to be a minority woman in order to get the job.
Under duress (lack of money) he goes and asks his "uncle" through marriage for a job. His Uncle Howard Prescott, played by Richard Jordan, runs a multinational corporation and sticks Brantley into the mailroom. The first day he is told to drive a executive's wife, played by the wonderful Margaret Whitton, to her house where he ends up being seduced in the pool room. When the woman's husband shows up he realizes he just slept with his "aunt" Vera Prescott, wife of Howard Prescott.
The rest of the movie revolves around two different story lines. The first is the love quadrangle of Howard, Vera, Brantley, and Christy Wills (played by Helen Slater). Christy is the mistress of Howard and ends up falling for Carlton Whitfield.
Who is Carlton Whitfield you may ask? Well I'll tell you. Carlton is the alter ego of Brantley. Carlton is a young up and coming junior executive who has plans on saving the company from a hostile takeover. This brings us to the second plot line. Brantley living a double life, within the company. One as a mailroom clerk the other as a executive who changes his clothes in elevators and his office way too much for his secretary to understand.
As you can guess the two plot lines bring along plenty of laughs and awkward situations. If you like plenty of laughs and the good guys winning in the end, watch this movie. You won't be disappointed.
Besides how can you not like a movie that includes the song "Walking on Sunshine" from Katrina and the Waves?
Posted by Ryan at 11:34 PM

Great review! Another classic 80s film! Gotta love the scene in the poolhouse! And the secretary was perfect!

Oddly enough I went to college with a guy named Brantley Foster. That was actually his real name!

Thanks for stopping by Beth. The poolhouse is a great scene. My favorit ethough is when Christy, Vera, Howard, Brantley, and the bald guy are all sneaking around the house trying to get into different bedrooms. It's hillarious!

I LOVE all M J Fox films. The 80's seems so long ago now but in other ways I am shocked when films from that time look so dated. Brings back so many memories. Thanks for the review. I wish I had it on DVD I would go and watch it now...

Also, have an award for you here :)

Hi Ryan,
I followed the link over here from For the love of all that is written... Happy blog birthday! This looks like a great blog!

Great Review! Man, you're giving me a To Be Watched pile to match my TBR pile! lol! Thanks!

I haven't thought of this movie in years! How young MJF looks.

Carolyn - For some reason the movies I love from the 80s never seem dated. Even if the clothes, hair, cell phones and just about everything else is completly different now :-) Thank you so much for the award, that was very cool of you!

Jenny - Thank you so much for coming over and saying Happy Birthday, that was very nice of you. Hope you stick around!

Krista - Get started on them now since I still feel like being in the whole 80s zone so I will be adding more later.

Deb - He just looks so boyish back then but not as bad as he did in Teen Wolf. Thanks for the birthday wishes!

LOL! The sneaking scene is so fun! I really must Netflix this just to see it again!

Beth the song is what did that scene for me..I never remember the name of the song but they also used it for a twixt commerical for a while.

By the way (this is just a general comment) I have never noticed how suggestive the poster for this movie was. Now that I'm looking at it every time I access my blog I can't help but notice it.

You are still living in the past if you don't think the 80's look dated!! ;) I look at films now and it makes me feel just a little old.....

I guess I get to involved in the story to pay attention to the physical. I do think the clothes and other such things are funny at times though. Especially when I see something I wore as a kid.