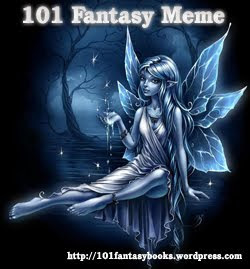 I found this over on Celia's blog, Adventures of Cecelia Bedelia. This is a 5 question meme that goes along with 101 Best Fantasy Books, which is an event asking everyone to nominate then vote on the best 101 fantasy book of all time.

Since I nominated about a gazillion books I should be answering the questions as well. So here goes nothing.

Wow, I'm not sure I can answer this with just one series. So I think I'm going to go with 7 (if that's OK). In my defense though there are two groups of two series that go together, both groups by the same author (if that made any sense). So I go with:

The Shannara Trilogy by Terry Brooks

The Valdemar books by Mercedes Lackey

2. What is your favourite fantasy character?

A little easier to answer since Vanyel Ashkevron from Mercedes Lackey's Last Herald Mage trilogy would definitely be number one. Though Belgarion and Sparhawk from David Eddings, Rand al'Thor and Moraine Damodred from Robert Jordan, Elena Michaels from Kelley Armstrong, Brin Ohmsford from Terry Brooks, and the entire cast of the still unfinished Exiles Trilogy by Melanie Rawn would be close seconds.

3. What is your favourite fantasy creature?

I'm a big fan of the nonhuman creatures in Mercedes Lackeys books. The Companions, Kyree, Hertasi, Gryphons, Firecats, Dyheli, and Tervardi. These are all sentient races equal to humans.

Other than that I am fascinated with dragons, banshees, vampires, werewolves, and just about everything else.

4. What is your favourite fantasy world?

Mercedes Lackey's Velgarth, J R R Tolkien's Middle Earth, Terry Brooks' The Four Lands, and almost every other land I get to escape into.

5. What is your favourite fantasy “magic” (i.e. The Will and the Word in David Eddings’ Belgariad series)?

Email ThisBlogThis!Share to TwitterShare to FacebookShare to Pinterest
Labels: Questions

Wheel of Time! I'm sad to say I've only read the first six. After that it was too hard to keep track of everyone and everything that was going on in the stories while still getting decent grades in my college classes. Maybe I'll go back and get to all of them someday...

Great answers! (and thanks for linking to me. you = awesome)

Celia, you are even more awesome, maybe the awesomest!

Awesome answers! Some titles I'll have to look into. Well played, Ryan!

Krista, I thank you as I bow in gratitude.

Cheers for doing the meme - sorry I'm a little late in noticing. A fair few books there I haven't read, thanks for brining them to my attention. I'm with on David Eddings, he was amazing!

Thanks Jo for stopping by!