The Agatha Christie Challenge --- The Murder on the Links 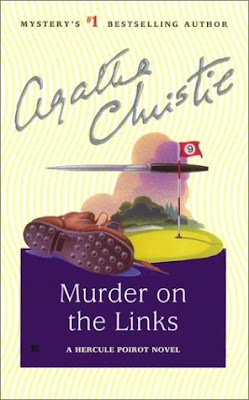 This was my third book in the challenge and not one I had read before. I must say it's not my favorite. I don't know if I could really even explain why I didn't love it. The writing was good the storyline was believable and the characters were well written. I may be that I haven't been feeling well the last few days and that got in the way of my enjoyment of this mystery.
Now I can't say I hated it either. I think I'm more neutral on it than anything else. I was glad that the third book brought Hercule Poirot back into my life. His methods are always a joy to read.
The highlight for me was Hastings meeting his future wife. It is a relationship that is talked about in future books but it wasn't a relationship I had seen from the beginning. For that reason alone I'm glad I read this book. Dulcie "Cinderella" Duveen was a fascinating character and I'm honored to meet her after all these years.
Synopsis From The Back Cover:
"For God's sake, come!" Unfortunately, by the time Hercule Poirot received Monsieur Renauld's urgent plea, the millionaire was already dead--stabbed in the back, lying in a freshly dug grave on the golf course of his adjoining Merlinville estate. There's no lack of suspects: his wife, whose dagger serves as the weapon; his embittered son, who would have killed for independence; and his mistress, who refused to be ignored--and each felt deserving of the dead man's fortune. The police think they've found the culprit. Poirot has his doubts. A second murder proves him right.
Posted by Ryan at 10:18 AM

I always think of the Dulcie in this whenever I see Dulcinea at the B&N board. I agree -- it's not a particular favorite, but I do love the Hastings storyline. And isn't this the one that starts with a girl sitting in a train car, swearing about something? I need to check. I remember I liked that opening, but I may have the books mixed up.

It's so much fun to follow your progress through Agatha Christie's books!

Becke, you are right as ususal. The book does open that way and it is a good opening.

I'm sorry this one wasn't as good! I also hope you feel better soon! Great review!

I think an Agatha book may be what I need today. But, I think I'll pick a different one. Maybe the last one you read

I have an award for you here
http://bookmagic418.blogspot.com/2009/08/lots-of-awards.html#links

Deb, The Secret Advesary was more enjoyable mainly because of the banter between Tommy and Tuppence. Thanks for the award. I will probably post about it in the next few days. I still have some from Nikola and Krista to do as well.

Hi, Ryan! I love love love Agatha Christie! I had an Agatha Christie phase when I was a teenager. I think Christie's novels were instrumental in my developing a liking for closed murder room mysteries.

Speaking of closed room murder mysteries, I think you'll like Stieg Larsson's The Girl with the Dragon Tattoo.

Thanks Peter for stopping by. I've had a love affair with Agatha Christie since 5th grade. I've just never read all her books before so I've decided to read them all in order. I don't think I appreciated how long it would actually take me though.

The Girl with the Dragon Tattoo has been on my wish list for a little bit. I'm going to have to bite the bullett and just get it.

I dont think I have ever read an Agatha Cristie book. I know.... I should be stoned.... or perhaps booked.

I will get to her work some day!

First of all, I hope you're feeling better.

Second, great review! I think I mentioned before that I love Hercule Poirot so I'm sure having him in the book made it more tolerable since it's not a favorite.

And last, but not least, I have an award for you on my blog!

Ha, ha, Becke, I didn't know I reminded you of an Agatha Christie character! Cool! I had forgotten about the character's name. I think that Hastings meeting her is the most memorable thing about this particular Christie to me. Keep up the good work, Ryan! Don't get discouraged - just take as long as it takes, even if you don't meet your original goal of reading them all this year. You seem to read really fast and be able to handle multiple books at a time, so you should do just fine!