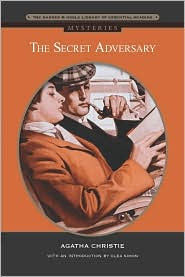 I finally finished reading the second book of my Agatha Christie self challenge. I picked it up shortly after finishing The Mysterious Affair at Styles but wasn't able to really get into it the way I wanted to, not because of the book though, but because of outside influences. Then when I went to pick it up again, I couldn't find the blasted thing. I looked everywhere for it and not one speck of it's lovely brown cover was to be seen. So I had to go buy the book again and now here I am a few days later giving my short review of it.
Here is the synopsis from the back cover:
Two bright young characters of the Jazz Age start out looking for adventures and wind us saving England in Agatha Christie's The Secret Adversary. Childhood friends Tommy Beresford and Prudence "Tuppence" Crowley have hit hard times. It's 1920, and the Great War is blessedly over. But the peace has left staid old England in the upheaval and the young veteran and the pretty former nurse flat broke. In the free spirit of the age, the two advertise themselves as "Young Adventurers," hoping for enjoyable as well as profitable employment. Their first client, a British Army Intelligence officer, promises both when he hires them to find a missing woman, and the charming duo are soon involved in a case of international intrigue, mistaken identities, and ultimately romance.

I found the book as well as the characters, Tommy and Tuppence, to be both intelligent and at times a little spastic. Now you may think that spastic is a bad thing, normally it is, but here it is a wonderful thing. The pace and the dialogue are snappy, quick, and above all else entertaining. The dialogue is simply breathtaking to read. It's quick and punchy. The report between Tommy and Tuppence is simply amazing. This book really showed how well Agatha Christie could write quick, believable dialogue. It is still the one element that is really sticking in my mind after finishing the book last night.
It had been a long time since I had read the book so the fact that this is more of a "espionage" novel rather than a "murder mystery" was not at the top of my mind. I was a little bit dismayed at first because I do enjoy a nice murder. It wasn't long though before I didn't care anymore. The story grabbed me and never let go.
I'm really looking forward to the next Tommy & Tuppence novel but there are a "few" books between now and then. They already feel like old friends that you can't get enough of.
If you like a great read with secret organizations, master-mind criminals posing as someone else, witty dialogue and characters, torpedoed ships, beautiful girls with amnesia, and rich Americans, this book is for you.
Posted by Ryan at 8:37 AM

I agree--Agatha Christie can do no wrong =P

I'm so glad you enjoyed this book, Ryan. It's a personal favorite of mine. I love Tuppence and Tommy, but I also thought it was a pretty good mystery, too. I tend to forget the title, though -- I think of it as the "Jane Finn" story.

I just looked it up and noticed -- if Wikipedia has it right -- that it was first published in the UK in 1922. That explains the espionage-heavy plot, since the world was at war when Christie was writing it.

Her spy/espionage stories are not her best written stories, but I think it was the raw enthusiasm of her writing in this story that endears it to me. She became a much better writer later on, but I still have a soft spot for this book.

It has been a really long time since I have read one of Christie's books... I'll have to check it out.

Keep up the good work, Ryan!

Awesome Review, Ryan! I hate when I lose things.

Okay,so that's 2 Agatha's down and how many to go?..LOL! Happy Reading!

Dannie...oh how right you are

Becke....I agree her writing does get better later on. This book was fun to read.

Dulcinea....Thank you for all the help. You are the best!

Great review! And don't worry...I lose something in my house once a day...LOL!

You are really making me want to go pull out my Hercule Poirot collection. I am very fond of him. The Poirot is the only Christie I own. However, I will definitely be watching at my used book sales for the other Christies that you are reading and reviewing.

I absolutely love Tommy and Tuppence!

I wasn't enamored with Tommy and Tuppence as you were. I guess, I'm with Becke that I don't think they were her better written stories. I agree, though, they were spastic, but maybe that's why I didn't like it as much as some of her other novels, which seem a bit more ordered.

Carol, thanks for stopping by Tommy and Tuppence are wonderful characters

readingfool, while I agree they aren't the best written I find them somehow charming and I do think they get better as they age, so does the writing.