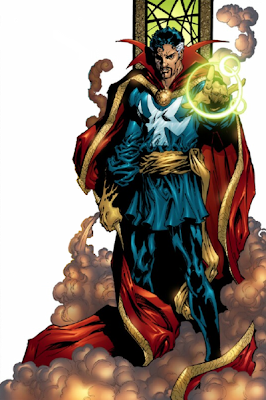 This is going to be the shortest Favorite Fictional Character post I do. Not because I have nothing to say but because Doctor Stephen Strange is simply the coolest super hero ever, enough said! I mean after all I use his image as my avatar on Blogger, Google Friend Connect, and on Twitter.
Whether he's kicking demonic butt in the comic books, fighting off evil sorcerers in the animated movie, or saving lives is the cheesy 1978 made for TV movie, he is simply the Sorcerer Supreme.
For those of you who don't know the Sorcerer Supreme is the one mystical powerhouse who defends our realm from demonic forces and those who want to wreak havoc with our reality.
I was a comic book junkie as a kid and always found myself fascinated by this character who is arrogant and kind at the same time. I would get lost for hours in his stories. His struggles against demons like Dormammu and The Nameless One would hold me spellbound for what seemed like an eternity. He still remains my favorite super hero of all time and I'm dying for them to make a "good" movie out of this character.
I encourage anyone who is even a little curious to visit Marvel.com biography and read about the most powerful sorcerer in the world.
Posted by Ryan at 12:10 AM

I had never heard of him. I often wondered who that was in your avatar! Now I know! They should do a movie, but do it right like Ironman or Spiderman...Batman (the new ones)?

I used to read comics a lot (mostly Archie, but also some Vampirella). I like some graphic novels like Watchmen and the one that the movie From Hell is based on, about Jack the Ripper. I forget the name.

I'm the same as bookaddict I had no idea who he was until you mentioned him over on BandN that one time on your favorites thread. He looks really cool, though. I would love to see a good movie made with him in it. The recent superhero movies have been something to marvel at lately.

Maybe one of these days I'll figure out one of my FF character and what they mean to me, and post a post on my blog. Of course, I'll say "This is an event Hosted by my Awesome friend Ryan"...LOL! I love these posts they're something diiferent, you know.

Well, I knew who he was... My brother was an avid comic book collector/reader as we grew up. I have seen the comics of Doctor Strange in his collection.

I would have to say my favorite would be Wonder Women. I just loved her when I was growing up. I watched the series, had the underroos. Yes, I hate to addmit that one but I did. I loved how she was just soo kind to everyone and stood for justice with out harm to others. I just loved the reflective wrist bands and the truth lasso.

Wonder Woman was always feminine yet she was strong enough to stand on her own and not depend soully on someone else. I really looked up to that strength I think the most. I wanted friends I could depend on yet I wanted to be strong enought to do and fight for myself, to be independent.

I'd never heard of him either, before you. But he sounds intriguing. Is he powerful enough to have gone up against Dick Cheney, the all-evil-one?

Michelle/Krista, he is the coolest Super Hero of all time. I'm really dissapointed that you don't know him. I'm going to go sulk in the corner now.

Melissa, Yeah! Someone who knows who he is. I'm going to come out of that corner now. Wonder Woman is cool.

Deb, I know he would have been able to banish him to someother dimension

Hello, Ryan! I also didn't know who this person was. It made me curious though. Lately, I've been discovering how enjoyable comics, ummm, graphic novels are!

Didnt know about this super hero.... but toally see the resemblance to you! :)

I have yet to read a graphic novel and now I feel like the one who is missiong out! I need to get going on that.

I like your final sentence Ryan, about wanting friends you could depend on, yet be strong enough yourself to be independent. That is a great line and one I would echo. :)

Peter/Sheila, thank you so much for stopping by commmenting. I appreciate the time it takes to read blogs and comment. So thank you!

Aha! I wondered who your avatar was. Excellent choice!

I was a comic book reader for quite a while, and mainly in the Marvel universe, but I read mostly the X-Men (and the gazillion offshoots) and some Spider Man. I didn't get the time (or have the money) to follow Dr. Strange too. Sounds like I missed a lot.

Phyl, thanks for coming by. Spiderman and Dr. Strange had lots of adventures together.