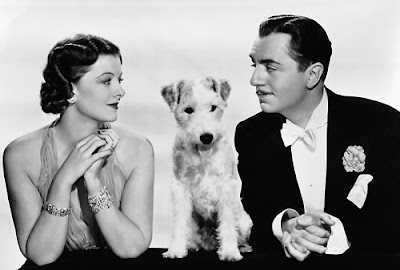 With it's witty and daring couple, The Secret Adversary by Agatha Christie, brought to mind my favorite sleuthing couple of all time. Nick and Nora Charles the star of 6 Thin Man movies and one book by Dashiell Hammett.


I have never read the book so I can't say how much Nora is in it but without her the movies would not have been the same. (There was also a TV show in the 1950s that I'm not familiar with either).


The premise behind the movies is that a detective marries a rich socialite, then tries to retire from the business. Now if this is all that happens we would not have 6 glorious movies to watch. It seems that everywhere they go someone seems to find themselves dead. It is then up to Nick to solve the crime, well almost up to Nick that is. It seems that no matter how hard Nick tries to keep Nora out of it, she always puts herself in the thick of things and in my opinion ends up doing or saying something that helps Nick solve the case.


Now these characters, as played by William Powell and Myrna Loy, are as well rounded as movie characters can get. On the surface you see two people whose constant banter and love of cocktails seems to be all they have in common. Once you get to know them though you are able to witness a strong marriage built on love, respect, and friendship. This was the type of relationship I have always wanted and never seem to be able to find. Watching them together is a joy and I wish they would have made many more Thin Man movies to enjoy. I will say that if these characters were played by two different actors I'm not sure I would have enjoyed the movies as much. William Powell and Myrna Loy have such great chemistry together, they went on and starred in 14 movies together.


As the movies progress something happens that made the characters fuller and richer. At the end of the second movie we learn that Nora is pregnant. The third movie introduces us to little Nicky, Jr. Being able to see how they adapt their lifestyle to this development is hilarious at times. In one of the movies Nicky, Jr. insists that Nick drink milk at the dinner table. Now I'm pretty sure Nick hasn't drunk anything non-alcoholic in years and watching his face as he takes a drink of milk is hilarious.


Now Nick and Nora would not be complete without Asta, their wired-hair terrier, that was their constant companion. Asta is hilarious and acts the coward at all the right times. The obvious affection they hold Asta in, as a dog lover, is wonderful to watch. They even go to the extreme of riding in the baggage car of a train in order to keep Asta with them.


For anyone who has not had the pleasure of watching these movies, I more than strongly suggest them. I implore you, no I beg you to do so. Please take the time and familiarize yourself with two of the best detectives in the biz.


The Movies In Order Are:

We haven't been able to get a hold of you for BBAW!

There goes my movie list again! LOL! Awesome review, thanks!

Hey Ryan - I am in crazy week mode but wanted to stop in and see what was new in your world. I have not watched any of these movies... you do make them sound good! :)

I see this picture at the top of the blog and I know I have seen them in a movie. But for some reason I can't place it. I am sure it is one of the movies listed here but at the same time I am drawing a huge blank.

I have been thinking since last Wed. who I am picking for my Fictional Character this week. I even had characters picked out. Now, sitting here at the computer typing away, I can not find my list or remember who they were. I hate when I do this. I write it down because I know I wont remember in 5 minutes what I was thinking. And now the paper is gone:( I am going to have to do a better job this week of keeping track of everything.

There was on the list movies I wanted to look up which had water aerobic dancing. I remember they were so cool to watch and always wanted to do it myself. I use to pretend I was that woman in the movies when I swam in my Grandmothers pool. I wanted to look it up and remember who she was and the name of the movie was. I am sorry Ryan, I havn't even gotten to do that.

I do have to say I do love these Fictional Character posts on Wend.

As do I, Ryan! I love these posts!

Krista, get started on them and let me know what you think.

Sheila, hopefully things will calm down soon. If you ever watch the movies (which you should) let me know what you think.

Melissa, don't worry about it. Just post about it when you remember. Maybe you could even do it on your blog and I could come over and rave about your pick :-)

Melissa, I forgot to say Esther Williams is the actress you are thinking of.

Thats it!! Hhhhaa, Thank you. Esther Williams is her! Thank you. Gosh, it has been so long since I have thought about this...

Okay, I am going to have to find time to stroll around the movie store. (If there is even one around anymore.) And remember all the great characters I have watch.

Ryan, that scene with Nick drinking milk is one of my very favorites in the whole series! Don't forget that Nicky Jr. first just says, "Daddy drink!" and Nick is delighted that his boy knows him so well. Then his ideas are dashed when the little boy adds, "Daddy drink milk!" LOL!!! My other favorite scene is when Nora summons Nick home from the park (where he is supposed to be reading Nicky Jr. a book, but has the racing form hidden inside it) by simply shaking the cocktail shaker, which Nick hears from a great distance and comes right home! And the scene where Asta runs away from a tiny kitten!

Dulcinea, thank you so much for stopping by. It means a lot to me. The shaker scene is hillarious as well.

Gotta love Nick and Nora! Thanks for reminiding me of them!

Alyssa, you are welcome. Hopefully you get a chance to "visit" them sometime soon.