That Which is Crooked by Doris Miles Disney 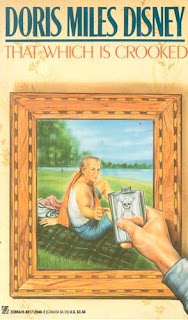 Prissy, puny Wally Howard knew hot it felt to be the runt of the litter.  His father had deserted him, his mother ignored him, and his siblings hounded and humiliated him.  Brother Henry, that cur, stole the only girl Wally ever cared about, and bitchy sister Ginny, who ran things, kept him on a short leash.  And there was that nosey little pup of a niece, Anne, always sniffing around looking for trouble.

It was a dog's life, all right, but Wally wasn't about to roll over and play dead.  Because he knew a few tricks - and all of them involved murder.

Back in May of 2012, Becke, the moderator of the Barnes & Noble Mystery Board, introduced a thread on Doris Miles Disney.  She was an American mystery author during the Golden Age of mystery writing, but she wasn't one I was familiar with before this introduction.  I was intrigued by some of what Becke had to say about her, and  what some of my fellow participants said after they read one of her books.  It wasn't a long discussion, but it was enough for me to put her on my list of authors I look for when I go to a used bookstore.  So when I found one that had an interesting blurb on the back, I picked it up and took it home.

In the beginning, I was really enjoying myself.  I already knew that Wally was going to be our main killer, there is no way you can get around that if you read the back cover.  So when his character is the first one we get to see, and to know, I was hooked.  The book progresses through the years, so right now, Wally is but a young boy, but there is something a little off about him.  We learn some information, about a baby sister dying in the crib and his father's violent death, that just doesn't sit right.  You know there is more to the story, but this is a kid we are talking about.  Why should any reader start to suspect him of anything right away?  If anything, you just think he's strange and twisted by the two deaths he's already been exposed to.

As he gets older, his desire to be the apple of his mother's eye and his hatred of his older brothers continues to grow.  He's never happy.  He thinks his mother doesn't love him as much as the others, and for a boy that desires nothing else but to be that one special kid, this burns him up inside.  Of course it doesn't help that his older brothers see him as a runt.  In their eyes, he is a puny boy who would rather put flowers together, than be outside working on the farm.

As Wally continues to grow up, he continues to get odder and odder.  He takes a job at a bank, "woos" a young lady for two years, but never takes it anywhere, and lives a life that seems to be a cover for something else.  He still hates his brothers, including the few that have died over the years.  One of them died in a bar fight, the other died falling off his front steps.  Wally and his sister-in-law are both there when it happens, and Wally quickly comes up with a story to make it appear to be an accident, when it was actually a result of a confrontation with the dead man's wife.  Both the woman and her son, are then beholden to kind uncle Wally for the rest of the book, and it proves to be the nephew's blind spot for years to come.

All Wally ever wanted was to be was comfortable and loved by his mother, so when his brother Henry comes back to town, Wally feels threatened.  It's Henry that steals Wally's girl.  It's Henry that takes her away and comes back with a baby in tow.  It's Henry, that years later, is still humiliating and bullying Wally, sometimes in front of Wally's "degenerate" friend, the local pharmacist.  Wally can't bare to be shamed in front of his friends.  He doesn't want anyone to look at him any differently, and since Henry is threatening that desire, Henry is the next one bumped off.  He is killed in such a way that it looks like an accident.  That event will promise to be the start of his ruin.

Henry's death destroys their mother, who sickens and eventually dies.  His mother never seems to forgive the slowness in Wally's reaction time, a slowness that may have doomed Henry to a watery grave, instead of a quick save.  When she passes, Wally's older sister, Ginny, is put in charge of the house and the fiances.  And they live like this, well into old age.  Wally, Ginny, and Henry's daughter Anne, one big "happy" household.

They live in the house for years.  Wally working his bank job, Ginny living a cold spinsters life, and Anne growing up in a household where one of the two adults hates her, the other spoils her.  Now Wally tried his best to hide his disdain for his niece, but he just couldn't help but show it at times.   Most of his strange behavior is attributed to being an old bachelor, who hangs out with the wrong kind of men.  They are the kind of men that Ginny considered degenerate, and it's for that reason, Ginny refuses to leave her estate to Wally.  It's also one of the reasons Ginny decides to sell the home, the home Wally has lived in his whole life.  You can probably figure out who is going to be the next to die.

But it's that last murder, the poisoning of Ginny, that forces Anne to reevaluate her uncle Wally and the years she spent with him.  After Ginny's death, he starts acting even stranger and in such a way that Anne's hackles are risen, though nobody pays all that much attention to her.  Even the young man she has fallen, the previously mentioned nephew, doesn't really believe her.  It's that blind loyalty to Wally, that forces Anne to maybe think he is in on the whole thing.  And when Ann starts to piece together what she remember of her father's death, a death she witnessed, Anne starts to fear for her own life.

Wally, who by now is in his 60s, isn't fooled by Anne.  He knows something is up and that Anne is about to put all the pieces together, so he waits for her one night, and the two of them have it out.  He not only confirms her beliefs about Ginny and Henry's deaths, he admits to killing that baby sister in her crib, and shooting his father.  It's too much for Anne, and Anne knows she's next.  Thankfully for everyone, the young man arrives just in time to help rescue Anne, and witness Wally's suicide.

When I sat down to type this review, I wasn't planning on it being this long, or so detailed.  What I really wanted to talk about was how I reacted to the book as a gay man.  I understand the book was written in the early 40s, and that some allowance needs to be made for that, but I'm having a hard time doing so.  Everything Wally is, everything Wally does is blamed on his being weak, prissy, puny, and not masculine enough.  It's his friends Ginny blames for his selfish behavior and for his inability to take care of himself.  While the author doesn't come out and say Wally is gay, everything points to that.  And his gayness is then blamed for what he does, as if it were a disease.  Now granted, it was considered a mental illness then, but tying his murderous, sociopathic heart to the fact he is gay, is just a bit much for me.

I'm not willing to say that it ruined the book for me, though it came pretty damn close.  I tried to be calm and collected when I was reading the book, but it took all my willpower to do so.  I wanted to sit the author down and let her know her ideas of what a gay man is like, are completely wrong.  That we aren't murderers who take out our family remembers when they threaten our depraved comfort.  Since I can't do that, I need to vent in this review.

With that all being said, I'm glad I read the book.  I'm even willing to read another by her, but if it deals with the same sort of subject matter, I'm also willing to say I'll be done with her.  I will not read a third book.

I do think you have to give older books some leeway when it comes to social issues, but the premise of this book rather offends me and I'm neither male nor gay. It's hard to believe people really thought things like that - I'm going to ask my mom about it.

Crazy ass thinking in my book. I'm glad that you're willing to give her one more shot but if it's still the same, ditch it!

Wow, what a book! It's hard to read something that was written at a time when that was the common mentality. I totally understand your animosity. I will say that Wally was just plain psycho and his being gay was not the reason. I'll be interested to hear if her other books have a similar approach. I hope not.