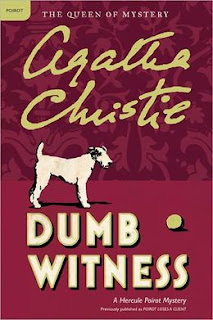 Everyone blamed Emily Arundell's accident on a rubber ball left on the stairs by her frisky terrier.  But the more she thought about her fall, the more convinced she became that one of her relatives was trying to kill her....

On April 17th she wrote her suspicions in a letter to Hercule Poirot.  Mysteriously, he didn't receive the letter until June 28th... by which time Emily was already dead....

I feel like I've reviewed so many Agatha Christie books by now that I'm starting to sound like a broken record.  There are only so many different ways I can say brilliant and well worth reading.  Even her weaker books, which this is not one of, deserves to be read by even the most picky reader.  I have yet to read one of her books, even The Big Four or Murder on the Links, that doesn't rise above most of the cozy mysteries being churned out today.  So I hope you get the point, that I enjoyed this one as well.

The one item I did want to mention is the way the book ends.  I'm going to have to spoil the ending, or at least what happens to one particular person, so if you don't want to know what happens, stop reading now.

At first I thought this was a trend I was mainly seeing from male authors, but upon further reading, I've came to realize it's more about the sex of the detective in the book.  In an alarming amount of books, when the killer is a female, instead of apprehending her, the male detective lets her know that he knows it's her, and then allows her to eliminate herself.  So many of these female killers are allowed to kill themselves at the end of the book, as opposed to facing charges and possible hanging.  This isn't even the first time Hercule Poirot has allowed a woman to take herself out in this manner.

I'm not even sure how I feel about the whole thing.  I'm not sure what it is about the times, that authors were okay with the idea of allowing a woman to kill herself, rather than face justice.  I'm not sure if it's the way society looked at woman during those years, or if it's something else.  Did they just assume that women weren't strong enough to face the consequences of their actions, or was it more about not wanting to shame her publicly.  Most of the cases I've seen, when the woman does kill herself, it keeps the truth of the crimes from getting out to the public.

I'm not sure it's a plot device that would be either used or sit well with most audiences anymore.  It feels sexist to me, a little degrading to women.  I could be completely off base.  I could be the only one who feels this way.  Or I could simply be rambling right now, and nobody who reads this will have a clue of what I'm talking about.

Challenges:  VM (Repeat Offenders)
Posted by Ryan at 12:00 AM

It is hard to review books out of a series after a while.

Is the trend of letting female killers do themselves in only in older books? I wonder if authors thought people couldn't handle men killing women back then.

I read this a couple of years ago - yes, brilliant - classic Christie.

I have to admit that I didn't notice/think about the sex issue of the 'suicidee'. It did seem a little too neat as an ending, but I hadn't considered that perhaps that that plot device would not have been used if the killer had been a man. Hmmmm...

To be honest, I haven't noticed the trend, but I don't know that it's about women not being capable of facing the consequence. Yes, the detectives are being "softer" on the women, but they're letting them have the choice. Women have historically not always been in control of their own destiny and ending like this allow them to be, for good or bad.

There are novels written today that allow the woman killer to commit suicide - The Alchemist's Apprentice comes to mind. Not a book I enjoyed, but the ending wasn't the reason.

Hi Ryan, I DIDN'T EVEN KNOW YOU WERE BACK UNTIL TODAY???? WHERE HAVE I BEEN???

My only excuse is that I'm not feeling rather vague lately. :)

At any rate, re: your comment on killers being allowed to off themselves. It's actually a fairly common thing in books from the golden age. Rex Stout did it. Ellery Queen did it as well as other mystery writers of that era. Many of the suicides were male, so the female aspect was not something I noticed. That's my two cents. :)

The thing I don't like about Agatha Christie books is that they all have more than one title. So I have a hard time keeping track of what I have already read! I don't think I read this one. I stopped reading your review so I didn't get the spoiler. But they are great books to read, better than cozy mysteries.
FYI- I can't rad the CAPTCHA at all, takes me 3 or more tries :(

Wonder how many Christie books you'll have to hit me upside the head with before I finally pick one up? Now I really am intrigued about this female killer thing. Next time I'm at the library sale, I'll definitely be looking for some Christie.