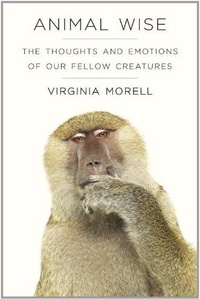 Did you know that ants teach, earthworms make decisions, rats love to be tickled, and chimps grieve?  Did you know that some dogs have thousand-word vocabularies and that birds practice songs in their sleep? That crows improvise tools, blue jays plan ahead, and moths remember living as caterpillars?

Animal Wise takes us on a dazzling odyssey into the inner world of animals, from ants, elephants, and wolves to sharp-shooting archerfish and pods of dolphins that rumble like rival street gangs.  With thirty years of experience covering the sciences, Morell uses her formidable gifts as a storyteller to transport us to field sites and laboratories around the world, introducing us to pioneering animal-cognition researchers and their surprisingly intelligent and sensitive subjects.  She explores how this rapidly evolving, controversial field has only recently overturned old notions about why animals behave as they do.  She probes the moral and ethical dilemmas of recognizing that even "lesser animals" have cognitive abilities such as memory, feelings, and self-awareness - traits that many in the twentieth century felt were unique to humans.

By standing behaviorism on its head, Morell brings the world of nature brilliantly alive in a nuanced, deeply felt appreciation of the human-animal bond, and shares her admiration for the men and women who have simultaneously chipped away at what we think makes us distinctive while offering a glimpse of where our own abilities come from.

I think I was in the 4th or 5th grade when I was first introduced to Koko, the "talking" gorilla, and forever more the idea that all animals where more intelligent than they were being given credit for, capable of feeling emotions, and worthy of respect was firmly cemented into my brain.  And though this has nothing to do with what this book tries to answer, I'm one of those that has always believed animals posses a "soul" as well.  To this day, I can not go hunting, and after reading this book, I'm not sure I can go fishing ever again either.

But even before my falling in love with Koko, everyone made fun of my sensitivity when it came to animals.  I could not watch a movie in which an animal was hurt or killed, without crying my eyes out.  Even during an episode of Silver Spoons, I cried when they shot a deer they were hunting.  Even though the screen said no animal has been hurt in the filming of this episode, I balled.  And don't get my started on Old Yeller, Bambi, Marley & Me, and even the Planet of the Apes movie where they are back in our time and are shot going onto a ship.  I cried so hard when those baby apes fell into the water.  Even the old fashioned, caged zoos where off limits to me as a kid.  I could not look at the animals, housed in cages smaller than my living room, without getting so upset that we would have to leave.  Even as an adult, I will have the occasional nightmare of being kept in one of those zoos.

With all of that, it could have been conceivable for me to dedicate my life to proving that animals have minds and emotions of their own, and for a while I did think of becoming an oceanographer.  But life took me in another direction, but my love for creatures around us never went away.  Sadly, I'm not even one of those that has followed animal research with any real consistency.  I would, like most of us, be fascinated by a new paper being published about the way a certain animal is able to create and use tools, how another has enough self awareness to recognize themselves in a mirror, or how another uses sex for relaxation; all of which we humans do as well.  And while those instances would stick in my mind as important, I was always too busy to look into the subject further.  So when the opportunity to review Animal Wise by Virginia Morell came up, I took it and couldn't wait to get my hands on it.

It's not an overly long book, from introduction to epilogue, it's around 268 pages.  But the information the author brings to her readers makes the book feel like it should have been denser and harder to read.  She has done a wonderful job in keeping the chapters short and informative.  She knows how to edit her words and has a wonderful ability to give her reader the information in such a way, that casual readers of science or general nonfiction won't feel as if they are being lectured too in a college biology class.

Each chapter introduces us to a animal or group of animals; ants, fish (mainly archerfish), birds (mainly parrots), rats, elephants, dolphins, chimps, dogs, and wolves.  She then introduces us to the scientists and researches who have dedicated their lives to figuring out what animals know, how they learn, what they mentally process, and even how they feel about each other, and in some cases how they feel about us.

Some of the information was surprising to me, especially the idea that fish not only feel pain, but may be mentally processing it, the same way we do.  Hence the reason I'm not sure fishing will be in my future anytime soon.  And some of the information, especially concerning how certain animals are self aware enough to understand what they are looking at in a mirror, or that they can pick out individual humans, was old information to me but I learned so much more about it.  It was fascinating to be given behind the scenes information on how the researchers set up the experiments, and how those experiments produce information that twenty years ago would have been scoffed at.

While Animal Wise didn't fundamentally change my views on the animal kingdom, it did give me the affirmation and knowledge to know that the way I have felt when I look into the eyes of any animal, is based on hard science, even if I didn't know it at the time.

The wonderful group at Crown Publishers have generously offered my readers the chance to win a hardcover copy of this book for themselves.  The giveaway will last until 11:59 pm, CST, on 4/27/13.  You must be a resident of the United States to enter, and all you have to do is leave me a comment with your email address.

It's amazing to me that anyone ever doubted animals, including fish, feel pain. I know our dog was far more intelligent than we are - she trained us very quickly!

Great review Ryan, I've been waiting for it.
Deb

I'm with you... I have to know how the animal is in a film (or even in a book now) before I read it. I've always hated it when people insist that animals don't have emotional intelligence. Seriously? Anyway, this one really sounds like a book I would enjoy. I have one of Jane Goodall's books on my tbr and I really need to get to that one.

Thank you for the wonderful review! I am going to have to add this book to my "To Read" list on my Shelfari account. Have you read "Woof: Writers on Dogs"? I loved it!

This sounds amazing. I love animals too. I have always wanted to work with them. Time after time I want to volunteer in a shelter but I know that I just couldn't handle it. One time I got really mad at my cat, and I yelled really really loud and I swear that he had tears in his eyes. I felt terrible. :(

Terrific review Ryan, I love animals (except mice and spiders and cockroaches ... ughh) and I love animal books. I'm with you, crying over Old Yeller, Benji, Marley and Me, I even tear up over the dog/toilet paper ads ... probably shouldn't have admitted to that one lol