The Bedlam Detective by Stephen Gallagher (Plus Giveaway) 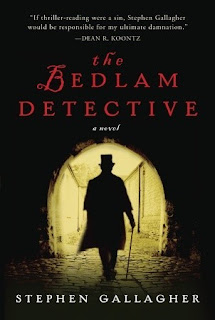 From a basement office in London's notorious Bethlehem Hospital, former policeman and Pinkerton agent Sebastian Becker is sent to interview Sir Owain Lancaster at his country estate.  The wealthy industrialist returned alone from a disastrous scientific adventure in the Amazon, claiming that wild beasts killed his family and colleagues.  He tells Becker that the same dark creatures have followed him home and are responsible for the death of two local girls and rumors of beasts on the moor.  But while madmen may see monsters, some monsters hide in plain sight.

I'm not sure I would ever want to put myself into Sebastian Becker's shoes.  He has recently moved back to England, a move that has left his family poorer than they had been in the States.  He no longer does official police work, or even the work he did for the Pinkerton Agency.  Instead he is working for the Masters of Lunacy, who job it is to decide if a peer is sane enough to run his own estate, or have it controlled by the crown.  It doesn't pay near enough to keep his family in the life style they enjoyed in the states, nor does it really feel as if it's something Sebastian really enjoys doing.  Not that I could blame him, not sure deciding if people are crazy or not is really something I would want to do either.

Well his latest assignment sets him down in the middle of a tragedy that seems to repeat itself all too often.  Young girls repeatedly disappear on the moors surrounding the resort town of Arnmouth.  And too often, those young girls are found horrifically mutilated.  On the day Sebastian Becker arrives in town to investigate Sir Owain's sanity, the bodies of two more girls are found, torn to pieces.  Becker can't help but assume that Sir Owain's rambling tales of the slaughtering of his family and expedition by Amazonian monsters may be hiding the truth.  Maybe the troubled peer is acting out in ways unbecoming of someone in his position.

It's up to Becker and the local law to not only figure out the true story of what's been happening to these young women, but to figure out if Sir Owain's Amazonian monsters followed him back home.  On top of that, Becker is dealing with serious family issues that would break many men, especially when it's on top such a draining investigation.

I have not read the book that proceeds this, which I think may have been to my detriment.  It feels as if a lot of the character development was accomplished in the first book, so a lot of the time I felt as if I was playing catchup.  Some of the family dynamics were a bit odd to me, but it's mainly because I didn't see them when they were living a happier life.  I'm not trying to whine about it, but it did hurt my enjoyment of the book.  Hopefully, when I get around to reading the first book, I'll feel as if I have a better understanding of who Sebastian Becker is.

The other thing I just have to mention, though for the life of me I don't have to, but I kept thinking about one of my favorite movies the entire time I was reading the book.  I don't know how many of you have seen a French film, Brotherhood of the Wolf, which plays on the Beast of Gevaudan, but the nature of the attacks kept reminding me of the movie.  I wish I could tell you that the rest of the book had anything to do with the movie, but it doesn't.  It's one of those odd connections that our brains make without us really understanding them.

The wonderful group at Crown Publishers have generously offered my readers the chance to win a hardcover copy of this book for themselves.  The giveaway will last until 11:59 pm, CST, on 5/6/13.  You must be a resident of the United States to enter, and all you have to do is leave me a comment with your email address.

Too bad there wasn't more character development. I'll have to think about this one.

thanks for this great giveaway which interests me. saubleb(at)gmail(dot)com

This book sounds unique and I would like the chance to read it. elliotbencan(at)hotmail(dot)com

It does sound interesting, but I'll take your word that the preceding book should be read first.

Oh my God! That is one of my favorite films. Do you like it? How odd that this book would make you think of that film, but books will do that sometimes. ;O)

I almost picked this book up in an airport on the weekend, I'm kind of kicking myself now.

sounds very intriguing. would love to win this. thanks for the giveaway!

hmm, is your comment system generating its own icons? this is not my usual icon showing up near my name. worried suddenly

It uses this image if you don't have an image registered with Disqus.

Sorry... I switched over to Disqus to try it out, and I'm not liking it. Will probably be switching back.

This book sure sounds interesting. I really like the character of Becker. I will have to put this author's name on my TBR list. Thanks for this chance.