Lord of Chaos by Robert Jordan 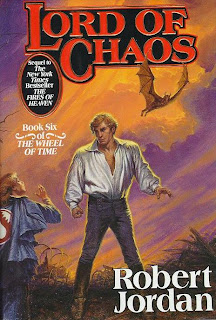 On the slopes of Shayol Ghul, the Myrddraal swords are forged, and the sky is not the sky of this world.

In Salidar the White Tower in exile prepares an embassy to Caemlyn, where Rand al'Thor, the Dragon Reborn, hold the throne - and where an unexpected visitor may change the world....

In Emond's Field, Perrin Goldeneyes, Lord of the Two Rivers, feels the pull of ta'veren and prepares to march....

Morgase of Caemlyn finds  most unexpected, and quite unwelcome, ally.... And south lies Illian, where Sammael holds sway....

Book six, is where the character of Rand al'Thor really starts to change.  Events happen to him in this book that have some serious consequences for the rest of the series.  It changes the way he deals with the Aes Sedai, destroying what little trust he had in them.  It alters his personality, making him just a bit darker, a little more serious.  This is where the tone of the books starts to mirror the overall mood of Rand and those around him.  It's an interesting shift from the tone in the first five books.

Egwene is now the Amyrlin Seat of the Aes Sedai in Salidar, and is trying her best to consolidate her power, and not allow those wanting to control her, get their hooks too deeply embedded.  She sends Nynaeve and Elayne to search for the Bowl of the Winds, to fix the weather that is punishing the lands.

I love Tylin Quintara Mistobar and her son, Beslan.  Tylin is the Queen of Altara, though her actual power doesn't really reach that far outside of the city of Ebou Dar.  They are both a hoot to read, and I love every second spent in their company.

I think Alanna is about as stupid as any Aes Sedai can be, and what she does, puts Rand's hackles up even more, though her ability to figure out the direction he is in does help later on down the road.

Verin, how I love you.  I hate what happens later on in the series, but you are still my favorite Aes Sedai.

Mat, who is supposed to be looking for Egwene and Elayne, in order to put Elayne on the throne of Andor, gets mixed up with Tylin in more ways than one.  He also somehow picks up a young orphan, Olver, who I grow rather fond of during the rest of the series.

Mazrim Taim, the sexy false Dragon, is brought back into the action.  Rand sets him up as the head of the Black Tower, his answer to the White Tower.  He has given amnesty to any men who can channel the One Power, and the only other man who is strong enough to train them is Mazrim. Rand doesn't like him.  As a reader, you can't trust him.  You know he is going to end up on the wrong side before it's all over, but at this point in time, there is just something sexy about him.  I think it's the bad boy thing.

Min and Aviendha aren't getting on my nerves as much as they used to, though I still think Aviendha is just a little bit too harsh.  I know she eventually softens up, so I'm okay with her still.

Morgase, I still don't like you.  You put yourself into the hands of the White Cloaks, knowing you were walking into a viper's pit.  You put your followers at risk, and allow others to die in helping you.

The Eye of the World
The Great Hunt
The Dragon Reborn
The Shadow Rising
The Fires of Heaven
Posted by Ryan at 12:00 AM

Great review :)
and well I agree with it all. Oh Taim you are so bad, and Alanna...agrrrrr

Yes, this is where the whole storyline changes and I think (trying to remember 12 years ago) this is why I started to give up on the series.