Pawn of Prophecy by David Eddings 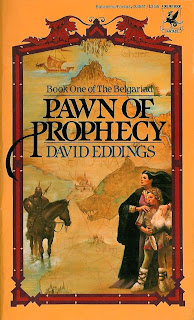 Long ago, so the Storyteller claimed, the evil God Torak sought dominion and drove men and Gods to war.  But Belgarath the Sorcerer led men to reclaim the Orb that protected men of the West.  So long as it lay at Riva, the prophecy went, men would be safe.

But that was only a story, and Garion did not believe in magic dooms, even though the dark man without a shadow haunted him for years.  Brought up on a quiet farm by his Aunt Pol, how could he know that the Apostate planned to wake dread Torak, or that he would be led on a quest of unparalleled magic and danger by those he loved - but did not know?

For a while, his dreams of innocence were safe, untroubled by knowledge of his strange heritage.  For a little while...

I think the very first time I read a grownup fantasy books as a kid, I was in the 6th or 7th grade and I tore through The Hobbit and The Lord of the Rings trilogy.  I even remember where we were at when I read them.  We were traveling with the carnival then, and we happened to be somewhere in Kentucky, I'm thinking Lexington.  For whatever reason I wasn't working at the time, and someone had given me a box set.  I think I read all four books within a week, and my love for fantasy books was cemented.

After that, I tried to get my hands on as many fantasy books as I could.  One of the first series I got to was The Belgariad series of five books, followed by it's sequel series, The Malloreon, which was another five books.  I had never read anything by David Eddings before that, but I feel in love with his world building and sense of scope he was able to develop.  I've since read the two series that feature Sparhawk, books I will reread at some point in time and will then review for your reading pleasure.

This series, starting with this book, introduced me to some of my favorite fantasy characters, characters that I never get tired of.  Polgara, who I even featured in this Favorite Fictional Character post, is one of the strongest female leads I've ever had the pleasure to read.  She along with a whole host of characters, including a young Garion, captured my heart right off the start.

Pawn of Prophecy, though it does have some action in it, acts as a cornerstone would when building a new home.  It sets up the world, gives us the mythology, and introduces us to most of the main characters.  And it does all of it brilliantly.  Eddings, while some accuse him of being a Tolkien wannabe, is able to create something truly unique and beautiful to behold.  He is able to create characters, that you feel are as real as your next door neighbors.  They behave and act as you would imagine yourself doing, if you found yourself in a strange world, full of magic and gods that walk the earth.

I know I'm going to be slow in my rereading of these series, but at least I know I have some great reading ahead of me.
Posted by Ryan at 12:00 AM

This was my first adult fantasy books and I never looked back :)

Wait a minute - you traveled with a carnival when you were a kid? You MUST write a memoir!

I think you should do what Kathy said!!! I remember from a long time ago you telling us about the carnival life!! I used to have all of these books but I'm pretty sure I loaned them out to a young man and they never came back...guess I know why!! :)

You know I am terrible. I've not read many of these classics to be as up on them as other fantasy lovers. I do need to get to these. :)

Hope you are doing well, friend. :)