Born on a Moutain Top: On the Road with Davy Crockett and the Ghosts of the Wild Frontier by Bob Thompson (Plus Giveaway) 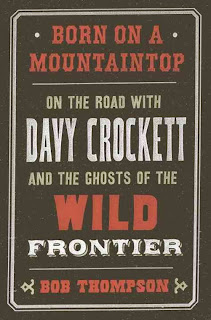 Pioneer.  Congressman.  Martyr of the Alamo.  King of the Wild Frontier.  As with all great legends, Davy Crockett's has been retold many times.  Over the years, he has been repeatedly reinvented by historians and popular storytellers.  In fact, one could argue that there are three distinct Crocketts:  the real David as he was before he became famous; the celebrity politician whose backwoods image Crockett himself created, then lost control of; and the mythic Davy we know today.

In the road-trip tradition of Sarah Vowell and Tony Horwitz, Bob Thompson follows Crockett's footsteps from his birthplace in east Tennessee; to Washington, where he served three terms in Congress; and on to Texas and the gates of the Alamo, seeking out those who know, love, and are still willing to fight over Davy's life and legacy.

I came to know and love Davy Crockett in about the same manner as everyone else my age, or even thirty years older than me.  It was watching Fess Parker play Davy Crockett for Disney, that made me fall in love with the adventures he had, and the kind of man he was.  Parker's Davy was daring, generous, fearless, and about every other positive adjective I can think of.  I wanted to go on his adventures and grow into the man he was.  He was almost godlike to me as a kid, and all I wanted was that damn coonskin cap.  I don't think I ever got that hat, but I never lost that feeling of adventure and awe that Davy, through Parker, instilled in me.

I was such a huge fan that when I finally had enough points with the Disney Movie Rewards program, the very first thing I ordered was the Davy Crockett Two Movie Set on DVD.  At that point in time, my son had never seen anything about or knew who Davy Crockett was.  When we got it in the mail, we fired it up, and I introduced my son to one of my childhood heroes.  There is just something so magical about the way Fess Parker played him, because it got my son hooked on him and he wanted to know all about Davy, Colonel Travis, Jim Bowie, and all the rest of the heroes who died in the Alamo.  I actually had to explain to him that Davy, though he is single handily fighting off the Mexican soldiers at the end of the movie, died.  My son though he lived and prevailed since the image faded to black.  He couldn't believe that this man, who he had just met, could die.  This was a few years ago, and while my son isn't as fascinated by him as he was then, he will occasionally put the movie in, and relive the adventures all over again.

For me, watching them with my son, it brought back all the magic.  I fell in love all over again.  Now my love for Davy has never made me go out and do my own research into his life.  I did buy a few children's books for my son after we had watched the movies for the first time, but I was never compelled to go out and read about the man himself.  I think part of me was scared that if I got to know the real Davy Crockett, that some of the magic would go away.  Even as a kid, I understood that the Davy I knew, was more myth like than real.  That he had been built up into some sort of a demigod; much like Paul Bunyan, Pecos Bill, Johnny Appleseed, or John Henry.  He was a creation of fact and fiction, and I was worried that some of the fact would overshadow that myth.

It's that separation that Bob Thompson was trying to do in his book, Born on a Mountaintop: One the Road with Davy Crockett and the Ghosts of the Wild Frontier.  Much like myself, he first discovered Davy through Fess Parker and Disney and rediscovered him through his kids.   Unlike myself, he was curious enough to set out on a journey to try and discover the real Davy Crockett, who the man was behind the myth.  What he found out is that sometimes, it's very hard to figure that out.

Our history books are not only full of facts and dates, but they include a fair amount of guesswork, myth building, and a even a tiny bit of fiction.  Those boundaries seem to be even further blurred when is comes to Davy Crockett.  So much of what we know, or think we know, is myth and reality combined into a rather tangled skein, difficult to comb out.  Thompson, through interviews, talking with Davy addicted historians, visiting site and landmarks important to the life of Davy Crockett, and investigation some of the source material himself, tries to do some combing on his own.  Oftentimes he discovers enough to make a solid decision on whether something is fact, fiction, or a blending of the two.  Other times, he is left with having to make an educated assumption, understanding he may have it wrong.

I'm not sure we will ever know the complete factual details of Davy Crockett's life, nor do I think we need to.  We need our heroes, our demigods, almost as much as the Greeks and Romans did.  We need men and women to elevate to a higher plane, people we can look up to and celebrate.  I'm not sure how much can actually be accomplished if we were able to bring them back down to Earth.  I think it's best they are left up in the stratosphere, it gives us, and future generations an example of how to live our lives.

Born on a Mountaintop: On the Road with Davy Crockett and the Ghosts of the Wild Frontier gives us some of those missing facts, dispels some of the myths, but keeps the magic intact.  Bob Thompson was able to create this wonderful balancing act of finding out the truth, what he could anyway, and keeping the myth whole.  He didn't hurt the legend of Davy Crockett through this book, he made it stronger and brought more color to it.  He kept Davy Crockett magical for me, but gave me more information about who the man actually was.

The wonderful group at Crown Publishers have generously offered my readers the chance to win a hardcover copy of this book for themselves.  The giveaway will last until 11:59 pm, CST, on 4/11/13.  You must be a resident of the United States to enter, and all you have to do is leave me a comment with your email address.

You're too young to have watched Davy Crockett on TV. I had no idea there are "Davy addicted historians." I couldn't resist listening to The Ballad of Davy Crockett as I typed this.

I agree Ryan is too young to remember Davy Crockett..But he is an old Soul...Lets sing The Song @bermudaonion Ready lol...Good to see you...Would love to win.Whoever does Congrats.What a Great Giveaway Ryan...Thanks...

I loved Davy Crockett as a kid, would love to win this book. thanks for the giveaway.
ehc16e at yahoo dot com

This book sounds so good. I have always been interested in Davy Crockett, I have read the books, watched the movies. I also loved watching Fess Parker play the character of Davy Crockett, and I am that old. Please enter me. Thanks!