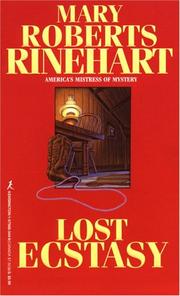 Kay Dowling - young, lovely, and spirited - was used to luxury, expensive pleasure, and the gentlemen who could afford them.  But when she accompanied her wealthy family to her late grandfather's ranch, it was ordinary Tom McNair who caught her eye.

But when Tom was arrested for a not-so-ordinary murder, Kay's life was suddenly turned upside down.  No one but Kay believed in his innocence.  And now someone was out to silence Tom - or take revenge; Kay wasn't quite sure which.  But she was determined to help Tom prove himself.  Even if she had to put her own life in danger to do it...

First off, this synopsis, other than the bare bones of it, has nothing to do with the book.  It makes Kay sound like a floozy, flitting from man to man until she meets Tom McNair.  Since there is only one other man in her life, her father's secretary, that even has a remote claim on her, she doesn't really seem the type of girl to flirt up a storm.

It also makes the murder and the revenge scheme on Tom sound like the main plot points of the book, which is so far off the mark, it makes me laugh even thinking about it.  First off, it wasn't a murder, it was a ranch hand shooting at an Indian who was stealing cattle.  That same Indian took months to die, and then it was from the bad care he got, not the gunshot.  Now the revenge part is true.  Another Indian follows him across the country, after he's joined a traveling circus/wild west show.  That same Indian does try to kill him, but Kay's life is never in danger.  All told, I think those two aspect of the book took up maybe a third of the pages.

The other two thirds is taken up with this rather bizarre romance between Kay and Tom.  It's so filled with self doubts on both sides, that I wanted to pull their hair out in frustration.  They both go back and forth on whether or not they like each other, or are right together.  Then when her father has enough of it, he packs the family up and goes back to New York.  Tom follows a little later, once he is about to be arrested for the shooting, and while at first it seems they will get together, there is a misunderstanding and he goes back home.  Once there he joins a the traveling shows, ends up back in New York, where our two love birds meet up once again, and decide to get married on the spot.

The action then takes us back to Wyoming, where the spoiled little rich girl is trying her best to be a rancher's wife, in what her family thinks are squalled conditions.  Needless to say, the rest of the book details a fight, her moving back, him pouting and feeling bad for himself, and joining the traveling show once again.  He just happens to end back up in New York.  They just happen to run into each other again and after some fighting, decide to live happily ever after.  And he still refuses to take her families money.  The End.

So if you couldn't tell, this is not my favorite Mary Roberts Rinehart book.  It has elements of two genres, western and romance, that I really don't care that much for.  To tell you the truth, if this had been set outside of a western setting, I may have been able to deal with the almost pure romance aspect of it more than I was able to.  The combination of the two, just didn't do anything for me.  There was mystery and intrigue, but not near enough of it for me.  Not even close to the amounts I've come to expect from her books.  I have a feeling this should not be shelved within the mystery section, but should be regulated to the romance department.

Challenges: VM (Yankee Doodle Dandy)
Posted by Ryan at 12:00 AM

Yeah, I can see why this wouldn't be your favorite - that romance sounds kind of teen-agery. Yes, I just made that word up.

Alright, I won't be reading this one. I don't mind Western or romance, but I don't like them when I'm expecting a mystery.

It definitely doesn't sound like Rinehart's best. And knowing how much you love her....I know how poor this one must be for you to say so. The Yellow Room (I hope I've gotten the title right...I'm too lazy to click a few links and find out) was like that...made it sound much different than it really was (although not in a really terrible way...just misleading).

I may give this one a miss if I stumble across it.

The title alone should have been your giveaway. Clearly a case of a reprint publisher taking advantage of Rinehart's reputation for being a primarily a mystery writer. This IS NOT really a crime or mystery novel at all nor was it originally released as one back in the 1920s. If you had seen the 1st edition DJ and the original plot blurb you would've avoided it, I'm sure. This is one of Rinehart's romance novels. Plain and simple. That is has a shooting and a revenge element is probably why the publisher jumped on it as a possible money maker for her mystery living fans.