A Crown of Swords by Robert Jordan 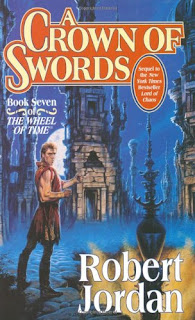 Elayne, Aviendha, and Mat come ever closer to the bowl ter'angreal that may reverse the world's endless heat wave and restore natural weather.  Egwene begins to gather all manner of women who can channel - Sea Folk, Windfinders, Wise Ones, and some surprising others.  And above all, Rand faces the read Forsaken Sammael, in the shadows of Shadar Logoth, where the bloodhungry mist, Mashadar, waits for prey.

Book 7, and the half way point through the Wheel of Time series.  There are only 7 more books to go, well to review anyway.  I've read the first 10 books so many times over the years, that it's rather amazing that I don't have them memorized, despite the overwhelming amount of characters, plots, and concepts that Robert Jordan explored in the series.  Of course, those who have read the series more than once know that it's impossible to remember everything that goes on, or whom everyone is.  Every reread, brings my attention to something I may not have really understood the other times I had delved into this world.  Every read feels like something new and fresh.  I guess you could call it rediscovering my WOT virginity.

Within the pages of this book, Lan resurfaces with Myrelle Berengari, the Green Ajah Aes Sedai his bond was transferred to when Moiraine disappeared.  Since it wasn't done with his permission, though Moiraine did have very good reasons for doing so, Lan is despondent and ready to give up.  When Egwene, who is working to consolidate power as the rebel Amyrlin Seat, discovers what's going on, she uses the knowledge to get Myrelle, and the other Aes Sedai helping her, to swear fealty to her.  She also sends Lan to help Nynaeve and Elayne in Ebou Dar.  Hopefully giving Lan a reason to live again, his love for Nynaeve.

And speaking of Nynaeve, she is quickly becoming my favorite female character this time around.  Between battling a Forsaken and wrestling with her issues, she is showing me a side to her strength I'm not sure I paid much attention to before.

Not sure I've mentioned Brigitte, the hero out of legend who is ripped into the current timeline and becomes Elayne's first Warder.  Right now I like her, though I liked her better in Tel'aran'rhiod, the World of Dreams where all the heroes tied to the Horn of Valere.  She seemed a bit more human, which is odd given the nature of her presence there.  In the current timeline, with all her memories of her former lives, she almost seems to be caught in a space between human and demigod.  Though I will say her temper and overall behavior, things that are supposed to make her more human, grate on my nerves a lot.

Also, Tom the gleeman who was with the crew from the beginning, and Julian Sandar are all over the place in terms of how I feel about them.  They are two of the second tier of characters, that while I understand their purpose, I never feel all that attached to them.  I like them, I like how the interact with Mat, Nynaeve, Elayne, and Brigitte, but they don't matter to me much in the grand scheme of things.  Though I will say, in the earlier books, I really do enjoy Tom.

And can I say how much I'm getting annoyed with Rand and how he feels for Min, Elayne, and Aviendha.  He loves them all, they love him, and while I know it's an unusual situation, if they can deal with, so can he.  He just needs to frickin get over it already, and accept how he feels.  Though Aviendha, I still don't like you as much as I want to, though Min is starting to get on my nerves for some reason.  She hasn't in the past when I've read the books, so not sure why she is registering so negatively with me this time.

Siuan Sanche, I am loving you more and more as time goes on.  The deposed Amyrlin Seat is coming along nicely in her character development and in helping Egwene figure out the true strengths of the position.  And I love her with Gareth Bryne. They play off each other so well.  When they are together, you almost forget she used to be the most powerful woman in the world, and that he is one of the greatest military minds of any generation.

The only other thing of great importance in this book is Rand's desire to go after the Forsaken Sammael, who was ruling Illian.  The fight takes some important turns and has consequences that won't be felt for books to come.  I do like that there final battle destroys Shadar Logoth, thus allowing Mashadar to combine with another character in such a way that changes things for the rest of the series.  Though I must say right now, I still hate the character that it attaches itself to.

One more observation though, I hate the Sea Folk.  They are almost as bad in temperament as the Seanchan and the White Cloaks. There are obvious differences between the three groups, but I can't stand any of them.  For all I'm concerned, the Forsaken are better than them.  Though even there, I hate the "new" Forsaken.

Lol, I get the feeling. When I re-read them I was at time all that happened? And then I thought, well it was 12 years that I read this particular book, no wonder ;)