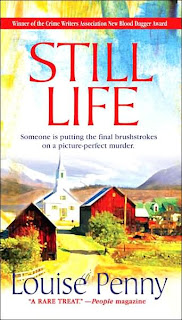 Chief Inspector Armand Gamache of the Surete du Quebec and his team of investigators are called to the scene of a suspicious death in a rural village south of Montreal and yet a world away.  Jane Neal, a longtime resident of Three Pines, has been found dead in the woods.  The locals are certain it's a tragic hunting accident and nothing more, but Gamache smells something foul this holiday season... and is soon certain that Jane died at the hands of someone much more sinister than a careless bowhunter....

When I first started blogging back in 2009, I saw The Brutal Telling by Louise Penny all over the place.  Every blogger I knew was reviewing it, and it was all over the bookstores.  For whatever reason, the cover turned me off and I never even picked it up to see what it was about.  I'm not sure I even read a review of it all the way through.  At this point in time, I'm kicking myself in the ass for those horrific decisions on my part.  If the rest of the series is anything like Still Life, I have some great reading ahead of me, despite the look of the individual covers.

To tell you the truth, I'm still not overly fond of this cover either.  There is nothing about it that would have got me to pick this book up in a store.  I probably would have assumed it was chick lit and walked right on by.  What's inside, living and breathing on the page, is this wonderful community of characters that has me wanting to move.  If Three Pines was a real place, I would quit my job and get to packing.  I'm not even sure what I would be doing once I got there, but I'm always willing to figure things out on the fly.  I totally understand why Armand Gamache fell in love with the town and it's citizens.

I'm not going to drone on and on about the eclectic mix of characters, or the pastoral locale that makes me miss Minnesota even more than I do.  I'm not even going to talk too much about the mystery, though the way it's structured makes me have faith in modern mystery writers again.  And I don't want you to think that my silence means I have nothing to say, because if I allowed myself to, I would take up another 25 paragraphs trying to convince you to read this book.  It's that unending urge to never shut up, that is keeping me from even starting.

So the only other thing I'm going to say is this, if you are a mystery fan or think you could be given the right book, please pick up Still Life, and discover my dream community for yourself.

I got this from the library a while ago, but didn't read it before I had to return it. Glad to hear you enjoyed it! I do want to read it at some point.

Everyone seems to love Penny's work but I've yet to try it. I must remedy that. I agree with you on the covers - I wish publishers would pay more attention to them.

I am glad I am not the only one unimpressed by the covers. My mom has urged me for ever (it seems) to read this series.

When I read STILL LIFE I was blown away. I was so moved and impressed I wrote Louise Penny a fan letter. I never do that. She replied via email within minutes! She's not only a clever mystery writer who practically single-handedly revived the traditional mystery, but she's a rather wonderful person.

One of my favorite series! And honestly it just gets better.

I'm glad that I listened to Margot last year and read this one and the second one so far..love them and Armand!!