A Study in Scarlet by Sir Arthur Conan Doyle 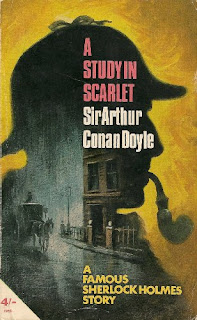 Newly returned from Afghanistan. a war injured Dr. John Watson, is trying to find his way in a London he is no longer familiar with.  Through a casual conversation with an acquaintance, Dr. Watson learns of a possible roommate to share expenses with.  It's that chance meeting that Dr. Watson first enters into the life of Sherlock Holmes, a young man trying to make it as an independent detective.

At first, while Dr. Watson seems to be impressed with Holmes' abilities, he not completely taken in with the idea.  When Holmes is asked to consult on his very first murder case, Dr. Watson is about to find out how wrong he was in doubting his friend and his keen observation skills.

Little do they know that the murder is really the ending of a story that started thirty-four years ago, in a country separated from them by the Atlantic Ocean.  It will take all of Holmes' observation and reasoning skills to piece the puzzle together.  If he can't, he may not get a second chance.

It's been a little over two years since I first dipped my toes into the waters of Sherlock Holmes.  I reviewed The Adventures of Sherlock Holmes back in March of 2011, and for whatever reason I never bothered to look and see if those short stories were the beginning of the tale.  For all of you fans out there, you already know the answer to that, A Study in Scarlet is where Sherlock and Watson first hook up.  And it was here that I decided would be the best place to continue on my journey.  I'm actually going to try and read the rest of the Holmes canon in order.

I really enjoyed getting to know Holmes and Watson as they are getting to know each other.  A lot of the mysteries I have read start with a pairing already together, so you never get to see how it all started.  You have to catch clues given throughout a series in order to understand the dynamics of the relationship as it progresses through the years.  With Holmes and Watson, you get to see it from the beginning, something I really enjoyed reading about.

The mystery itself was a classic example of a vintage mystery.  A dead man is found in a vacant house, no marks upon his body, and a strange message written upon a wall.  Two of Scotland Yard's best detectives are assigned to the case, and they decide to call Holmes in almost at once.  From the beginning, there seems to be no leads and no real direction to take the investigation in.  Holmes being Holmes, he acts strangely and asks the oddest questions, questions that everyone else seems to not get the point of.  Once they leave the location of the crime, his behavior just gets stranger.

What nobody really knows, including the audience, is all the work he is doing behind the scenes in order to solve the case.  I do wish there would have been a little more insight given to the audience, instead of having a solution sprung on us.  Granted, the explanation is long and complex, and doesn't really leave any questions unanswered.  Though the Mormon aspect of it, takes a little stretching of the imagination.  I'm not sure how much of the Mormon history expressed in the book is accurate, but the attitude the book takes is the only aspect that really does date the story.

Now that I have the opening gambit out of the way, I'm really looking forward to the rest of the Holmes/Watson partnership.

I remember A Study in Scarlet very fondly; it's been a while since I've read it but I like how the two stories come together.

I've been around Sherlock Holmes all my life (how could you escape him?) and although I have The Complete Sherlock Holmes sitting on my bookshelves, I don't think I've ever read anything by him. What a great idea to start at the beginning with this.

So much to read! Thanks for the reminder not to miss the classics.

Well, not BY him - you know: Conan Doyle did the work, Sherlock gets the glory. ;-)

You won't be sorry, reading the SH canon in order. I like to read stuff in order myself, and the relationship does evolve, making a nice continuity to the episodic stories.

When I went to see the Robert Downey, Jr. Sherlock movie, I told my mom about it and mentioned that I'd never read any of the books. She was shocked and told me she grew up on them. I am totally convinced you were born too late! lol

I tried reading Sherlock back in 2006. I didn't make it through. I should probably give it another shot soon. Sometimes I just have to push myself through the first few chapters.

You know, I love the TV and film adaptations that I've seen, but I have never read any of the books. And I do own the Complete Sherlock Holmes. Guess it's time to dip my toes, as I have with Agatha Christie.

Great review, by the way!

I read this recently, too. I was really digging it until the story switched to Utah and then I was like, "Wha-huh?"

I just read this, too, as you know, and I am so glad you gave it another chance. Isn't getting to see the beginning so much fun?