Puzzle for Players by Patrick Quentin 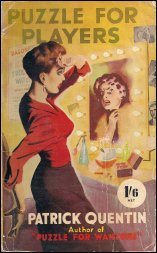 Reformed alcoholic Peter Duluth is trying to make a comeback on Broadway as the producer-director of a sock script by a newly-discovered playwright.  But a deadly drama is being enacted in the reportedly-jinxed and long-uninhabited Dagonet Theater.  Apparitions are seen in dressing-room mirrors; rats are set free beneath the boards; and the celebrated coffin scene is played with unfortunate and unwanted realism.

Offstage an all-star cast has been assembled.  Behind the scenes, a beautiful ghost, a man without a face, and a phantom saboteur are vying for the lead.

One of the best byproducts of my starting this blog, is my falling in love with a wider gamut of vintage mysteries.  I've always adored Agatha Christie, she was my first exposure to grownup mysteries, but it sorta stopped there.  I don't have a ton of excuses for why that happened, so I'll just chalk it up to laziness on my part.  And it's not just falling in love with a broader swath of Golden Age mysteries, it's my realization that men wrote great mysteries back then.  The few times I did venture away from Dame Agatha, it was always towards other female writers.  It's sounds like an obvious thing, but for whatever reason, it never dawned on me that men wrote mysteries, I always assumed the books would be more like the typical thriller that are pumped out today.

I read the first book in the Peter Duluth series, A Puzzle for Fools, last year and I loved it.  I fell in love with Peter and his quest to redeem himself after falling into an alcoholic stupor after the horrific death of his wife.  In the first book he has checked himself into an asylum to recover, and there he gets dragged into investigating a series of horrific murders.  Through that process he meets the woman who he will fall in love with and decide to make a star on Broadway.  He also becomes friends with the doctor who runs the asylum and helps him get over his alcohol dependency.

In Puzzle for Players, Peter is tyring to make his big Broadway comeback and trying to hold his fragile recovery together.  He has found what he believes to be a new show that has the potential of stating once and for all that he is back.  He has cast his girl in the show and has gathered a group of actors together that almost guarantee the shows success.  So when he is moved to a rundown, dilapidated theater and thing start to go wrong that very night, he is hung on tenterhooks for the rest of the book.  Between the horrific faces appearing in mirrors, ghostly women hanging in wardrobes, blackmail, a female lead who's ex husband is doing whatever it takes to be in the show, and the asylum bound brother of the male lead, Peter is facing an uphill battle just to stay sane, let alone making sure the show is a success.  So when a real body appears, it drives Peter even further down in the dumps.

Luckily for him, the financial backer of the show is the same doctor who saved his sanity in the asylum, and he appears to be doing it once again.  If I were to have a quibble with this book, it would be with the the fact I wanted Peter to do most of the sleuthing.  Instead it's the doctor who does most of the legwork.  I'm still pretty content with the book overall though.  Peter is a great character to get to know, and even if he didn't do a lot of the sleuthing, watching him try to deal with everything that was going on was worth the read.  Now I just need to get the third book in the series.

It's been quite a while since I read straight mystery, I seem to lean more towards suspense/thrillers these days ... but, that vintage cover sure is enticing :)

It's so funny that you said that about men writing mysteries. My mom said one of the big appeals of Agatha Christie mysteries for her when she was growing up was that they were written by a woman.

Ryan: I'm glad you like the Peter Duluth mysteries...so far I'm not finding myself to be all that much into them. I haven't quite been able to put finger on exactly why yet. I've got another on the TBR stack (probably won't get to it this year)...so I'll be giving him another go at some point.

PS: I will say that the synopsis on this one sounds particularly good....

This series sound very interesting, especially the theatrical background. I don't remember reading any of them before. Will have to look out for some of them.