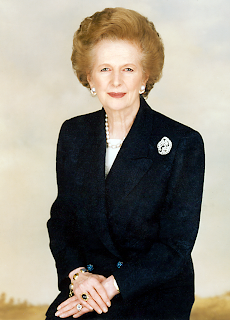 Growing up, even as an American, I was in awe of Prime Minister Margaret Thatcher.  Here was an individual, who as a woman, rose through the political ranks to become one of the strongest and most capable leaders to run any country, let alone the United Kingdom.  As an adult, despite disagreeing with almost all of her politics, I still stand in awe and of respect for her.

You don't have to share someones politics, to recognize the amount of influence they had over their country,and over large portions of the world.  She, through talent and willpower, set out to turn her country back onto what she thought was the correct path.  Over her long political career, she had to prove time and again that not only was she capable of doing the job, but she had to overcome other people's misconceptions of her.  No matter what else you may think of her, you can not say she didn't prove her doubters wrong.

Ryan, most Indians were in awe of Thatcher too as we were in awe of Indira Gandhi long before the baroness and especially since the subcontinent was ruled by other women heads of government in neighbouring Pakistan, Sri Lanka, and Bangladesh. It would be nice to see a woman president in the White House and about time too. Thatcher was one of the troika of three leaders who dominated the politcal scene in Europe for many years, the other two being Mitterand of France and Helmut Kohl of Germany. I think UK's decline on the world scene began with Thatcher's departure.

The world lost a great one.

Ryan,
I'm seeing, on FB, so many negative things regarding this woman.

I made a simple comment, on one thread, about NOT trashing the woman after she's dead, and boy did I get blasted off the page. People assumed my POV, just from one comment I made.

Thatcher obviously made an impact on many people around the world, including the people of her own country, and the negative impact is certainly standing out at this time. She was literally hated, yes, hated.

I didn't know Thatcher, only of her, nor did I follow her politics, or her actions and contact with other hated leaders of other countries.

I can't answer for her actions; I can't even respond to them. I simply felt it served no point, now, to beat someone who no longer is alive to defend themselves.

I'm sure her history will be written about, by many biographers: Time will always tell who these people we thought we knew in life, really were.