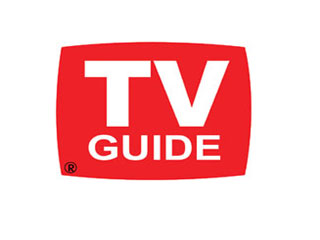 I know the last time I shared a list that TV Guide put together, I admitted to being a TV junkie.  Even though that was years ago, I'm pretty much in the same boat.  So I'm still reading TV Guide, I'm still checking out there website about once a day, and I'm still fascinated by the lists they put together.  Now most of the time, including this one, I'm not always agreeing with the lists, but at least it gets me thinking about my favorites.

This time around the put together what they think are the 60 sexiest couples to grace a TV screen.  Now obviously, they have a different idea of what is sexy, but I'm even okay with most of the list that I would have not put on there, because I do understand their reasoning.  Something odd about this list, they did a top ten, then listed the remaining 50 alphabetically by show.

1.   Doug and Carol from ER
2.   Rob and Laura from The Dick Van Dyke Show
3.   Angel and Buffy from Buffy the Vampire Slayer

4.   Eric and Tami from Friday Night Lights
5.   Ross and Rachel from Friends
6.   Mulder and Scully from The X-Files
7.   Sam and Diane from Cheers
8.   Mr. Big and Carrie from Sex and the City
9.   David and Maddie from Moonlighting
10.  J.R. and Sue Ellen from Dallas
11.  Gomez and Morticia from The Addams Family 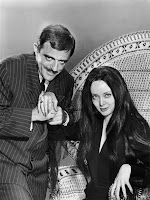 13.  Michael and Sydney from Alias
14.  Vincent and Catherine from Beauty and the Beast
15.  Dylan and Brenda from Beverly Hills, 90210
16.  Darrin and Samantha from Bewitched
17.  Bob and Emily from The Bob Newhart Show
18.  Booth and Bones from Bones
19.  Castle and Beckett from Castle
20.  Chuck and Sarah from Chuck
21.  Cliff and Clair from The Cosby Show
22.  Pacey and Joey from Dawson's Creek
23.  John and Gabrielle from Desperate Housewives
24.  Matthew and Mary from Downton Abbey
25  Steven and Luke from Dynasty
26.  Peter and Olivia from Fringe
27.  Luke and Laura from General Hospital

28.  Agent 86 and Agent 99 from Get Smart
29.  Luke and Lorelai from Gilmore Girls
30.  Finn and Rachel from Glee
31.  Will and Alicia from The Good Wife
32.  Chuck and Blair from Gossip Girl
33.  Derek and Meredith from Grey's Anatomy
34.  Frank and Joyce from Hill Street Blues
35.  Barney and Robin from How I Met Your Mother
36.  Tony and Jeannie from I Dream of Jeannie
37.  Ricky and Lucy from I Love Lucy

55.  Clark and Lois from Smallville
56.  Sonny and Cher from Sonny and Cher Comedy Hour
57.  Donald and Ann Marie from That Girl
58.  Michael and Hope from thirtysomething
59.  Bill and Sookie from True Blood
60.  Damon and Elena from The Vampire Diaries

A couple of my thoughts on the list, I don't understand why of the few gay couples to grace a TV show, they chose Steven and Luke from Dynasty.  Their relationship was so calm, that it was hard to find a picture of them together.  The other couple they chose was Beecher and Keller from Oz, a violent couple that was only together because they were in prison.  Instead I think Brian and Justin from Queer as Folk should have been included.  It was a May/December romance that heated up in and out of bed, had more problems than any other couple I've ever seen, but there was such a huge depth of love between them, that even though they went their own way at the end of the show, you knew they would end up back together. 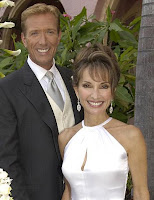 And as much as I love Luke and Laura from General Hospital, what about Erica and Jack from All My Children.  They sizzle together.  Now matter how many times they break up, marry other people, have children with someone else, fight, piss each other off, they are always there, together.  For that matter why not, Ryan and Greenlee, Jesse and Angie, or Zack and Kendall, all from the same show.  They are all great couples, better than some of the others on the list.  Lets not even get started on all the other soaps, One Life to Live has some great couples, couples deserving of being on the list.  I'm not sure about the other shows, because I never watched them, but I'm sure there are some couples who are bigger than the New Girl couple, a couple nobody will remember in a few years.

I did find it interesting that at least two actors made the list twice.  The gorgeous David Boreanaz for Buffy the Vampire Slayer and Bones, and Larry Hagman from Dallas and I Dream of Jeannie.  So if TV Guide ever does a top 60 list of the hottest actors, they both better be on it.  I also don't think a "reality" couple should be on the list, Sonny and Cher were cool, but I was hoping this would have stayed a fictional list.  My last thought,  I wish Lee and Amanda from Scarecrow & Mrs. King would have made the list.  I love them.

Matthew and Mary from Downton, no thanks, they do not sizzle.

And I never really felt Clark and Lois either

I don't watch enough TV to weigh in on this, but I do love Lucy and Ricky!

Desi Arnez & Luci--sexy? Based on their tv show? Seriously? And, I'm with you, I don't think Sonny and Cher belong on there.

And, as for soap opera stars....I didn't watch them, but all I heard about from high school on was about Bo and Hope on Days of Our Lives. I'm wondering why they aren't on there?

Ooops. Ricky & Lucy on the show.

The whole Luke and Laura thing is weird. If I recall correctly, he raped her and then married her. Yeah... that's a hot couple.

I love Buffy & Angel and of course, Morticia and Gomez is one of the TOPS. They were NEVER afraid to show their love!

Clearly my idea of sexy is not the same as TV Guides. It almost seems like they've gone more with "best known as being a couple." Cuz, seriously, as much as I loved Dallas, JR and Sue Ellen were not sexy in my mind. And Darrin? Sexy? Not so much.

I can't believe that not noone has said Blake & Krystle from Dynasty?!

Best couple ever, with the best chemistry between them. At times a bit too much, yes, but my god the chemistry! :)

And J.R. & Sue Ellen? No, not in my book. They weren't even truly in love with eachother.