Frozen in Time by Mitchell Zuckoff (Plus Giveaway) 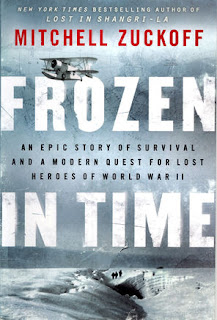 On November 5, 1942, a U.S. cargo plane on a routine flight slammed into the Greenland ice cap.  Four day later, a B-17 assigned to the search-and-rescue mission became lost in a blinding storm and also crashed.  Miraculously, all nine men on the B-17 survived.  With the weather worsening, the U.S. military launched a daring rescue mission, sending a Grumman Duck amphibious plane to find the men.  After picking up on member of the B-17 crew, the Duck flew into a severe storm, and the plane and the three men aboard vanished.

In this thrilling, true-life adventure, Mitchell Zuckoff offers a spellbinding account of these harrowing crashes and the fate of the survivors and their would be saviors.  Full of evocative detail, Frozen in Time brings their extraordinary ordeal vividly into focus - a fight to stay alive and sane through 148 days of a brutal Arctic winter.  Zuckoff takes us deep into the most hostile environment on earth and into the snow case and tail section of the broken B-17, where the airmen took refuge from subzero temperatures, hurricane-force winds, and vicious blizzards.  He places us at the center of a group of valiant men kept alive by sporadic military food and supply drops until an expedition headed by the famed Arctic explorer Bernt Balchen attempts to bring them to safety.

But that is only part of the story that unfold in Frozen in Time.  Moving forward to today, Zuckoff recounts the efforts of the Coast Guard and North South Polar Inc., led by and indefatigable dreamer named Lou Sapienza, who worked for years to solve the mystery of the Duck's last flight and recover the remains of its crew.

Before I sat down to write my review of Frozen in Time, I went back to read the review I did of Lost in Shangri-La, the last book I read by Mitchell Zuckoff.  Boy, did I like that book.  I'm not sure I've given such a glowing review to another nonfiction book since I've started blogging.  I droned on and on about how masterfully the author was able to not only bring the events alive, but to humanize the the men and women involved, making them feel three dimensional in ways most authors can't do with historical figures. I had paragraph after paragraph lauding the author's narrative voice, his attention to detail, and his ability to make history as easy to read as fiction.  It would be far easier for me to cut/paste my review of Lost in Shangri-La, changes a few names around, and have the review over and done with.  Since that's cheating, I won't do that.

What I do want to say is how much I appreciate books like this.  There is so much of our history, heroic stories that seem to be forgotten in a rather short amount of time.  They may capture the news of day, or even a month or two, but new events slowly force them back in time, into a miasma of obscurity that tends to swallow them whole.  Rarely, and only after an untold amount of dedication brought to the story, do the men and women history forgot, get a chance to be remembered again.  Zuckoff is brilliant at being able to pluck a instance of history and bring it back to life in all it's glory.  He doesn't just tell the story, he makes his readers live the story along side those he is bringing back to life within the pages of his books.

Parts of me, felt every moment these men spent on the ice.  I put myself in their shoes, and I honestly don't know that I'm man enough to fill them.  What they went through, the physical and mental anguish brought forth by the circumstance they found themselves in could easily break most of the men I know.  I gasped out loud as men who survived a plane crash onto a desolate Arctic wasteland, who survived for untold weeks upon the ice, succumbed to the dangers all around them.  Whether they were plunged into the bottomless depths of an icy crevasse, or lost for over 70 years entombed in ice after a plane coming to rescue them, is lost to a storm, I can only imagine the anguish they most of felt, right before they slipped away.  It's a horror I'll never feel, but it's a horror I can now sympathize with.

The way he weaves the three crash stories together, two of which are a direct result of the first, is seamless.  There is a rhythm to the events and to his narrative that carries the reader along, never allowing them to get bogged down in confusion or apathy for what they are reading.  When the narrative switches to the present, where he is not only finding himself personally, but financially as well, invested in the search for the doomed rescue plane,  and it's three passengers, it fits in with the rest of the story.  So often, there is a jarring sense of dislocation when a historical narrative jumps time periods, Zuckoff pulls if off perfectly.

One of his fellow explorers, as they were searching for the plane in Greenland, would ask Zuckoff how the book would end.  I'm not sure this book has a proper ending, and given the circumstances of what he was writing about, I think that's appropriate.  I'm looking forward to discovering the end, when it happens.

The wonderful group at TLC Book Tours have generously offered my readers the chance to win a copy of this book for themselves.  The giveaway will last until 11:59 pm, CST, on 5/10/13.  You must be a resident of the United States to enter, and all you have to do is leave me a comment with your email address.
Posted by Ryan at 12:00 AM

I also enjoyed this book very much (I'm on the tour as well), I though Lost in Shangi-La was better but as you mentioned, this book was seamless especially when hopping from era to era.

I did like Lost in Shangri-La a bit better, but not much. i do know that I'm just about willing to read anything by this guy now, especially if he brings that same narrative style to it.

Wow, it sounds like Zuckoff is an exceptional writer. I've got this book and really look forward to reading it now. No need to enter me.

This book sounds compelling and riveting. Thanks for this great giveaway.

I think you will really enjoy this one.

I wonder if this book will be as good as UNBROKEN by Laura Hillenbrand.
my email:
bethvollbach(at)sbcglobal(dot)net

I really need to add some nonfiction to my reading. This one sounds great and I loved your review!

thanks for the giveaway! a guy in my book club loves every thing with planes. would love to win this for him.
Emma
ehc16e at yahoo dot com

I have wanted to read Lost in Shangri-La ever since I read your review. This one sounds equally impressive. Thanks for the chance!

"It would be far easier for me to cut/paste my review of Lost in Shangri-La, changes a few names around, and have the review over and done with." This is enough for me - I too loved Shangri-La and if this new book is as good as that one I'm in!

I'd love to be entered. I've heard nothing but good things about this author, and am glad to see you liked this book, too.

This book sounds so interesting. I love that it is a true life adventure. I would really enjoy reading this it. Please enter me. Thanks!

This sounds intriguing and memorable. thanks. saubleb(at)gmail(dot)com

Thanks for this great giveaway which interests me. elliotbencan(at)hotmail(dot)com