The Absolutist by John Boyne 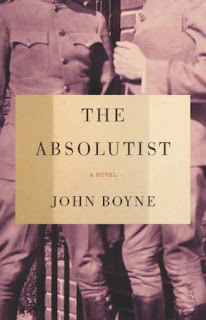 It is September 1919:  twenty-one-year-old Tristan Sadler takes a train from London to Norwich to deliver a package of letters to the sister of Will Bancroft, the man he fought alongside during the Great War.

But the letters are not the real reason for Tristan's  visit.  He can no longer keep a secret and has finally found the courage to unburden himself of it.  As Tristan recounts the horrific details of what to him became a senseless war, he also speaks of his friendship with Will - from their first meeting on the training grounds at Aldershot to their farewell in the trenches of northern France.  The intensity of their bond brought Tristan happiness and self-discovery but also confusion and unbearable pain.

There aren't a lot of books that can break my heart.  No matter how much I'm able to connect with the characters or find myself lost in the action, I don't make a habit of emotionally investing myself on such a visceral level.  It's not something I make a conscience decision on, I just read so much that if I allowed myself to put my emotions into every book I read, I would be a basket case.  But every once in a while, I can't help myself.  I allow myself to fully invest in what I'm reading.  I get so involved in the character's lives that I'm not able to keep those walls up.  The Absolutist, is one of those cases.

I've been trying to figure out what I can say about this book, without giving way too much away, but get everyone who reads this to read the book for themselves.  I know one of the central themes of this book is how war can change and solidify personal beliefs and what those beliefs can lead too.  This book, in stark terms, examines what can happen when certain beliefs run in the face of what is expected of a soldier in battle.  I may not be wording this right, but I think it's a pretty important idea to explore in the face of what's been going on over the last 11 years.

It's the more personal face of the story that moved me the most though.  More than anything else, this is a story about Tristan and Will.  Granted it's told through the eyes of Tristan, but I think he gives a pretty accurate account of the events that lead up to that unbearable pain mentioned in the synopsis.  I don't think he pulls any punches or makes any excuses for his actions, though it may have been nice to have had Will's reasoning for his own behavior towards Tristan and for his final act that sets the course for the rest of the book.

I can pretty much tell you in one word the motivating factor for most of what happens, fear.  Fear of the unknown, but more importantly, fear of self.  It's the fear of allowing yourself to be who and what you are, that sets everything else into motion.  Neither one of these men can fully accept or deal with what they are feeling or what they did as a result.  It's the waste of life, both physical and emotional, that moved me in a way few books can manage.  It's what happens to both these men as a result of fear that broke my heart and forced me to think of the what might have beens in my own life.  It's not a reaction I want to have from every book I read, but when it does happen, I'm grateful for it.
Posted by Ryan at 12:00 AM

Wow, I can tell how much this book moved you. It sounds like a very powerful book.

Have you been to the World War I museum in Kansas City? I was left with a sense of frustration at such pointless, useless violence. Mostly I read happy books (or nice murder mysteries), but I'll keep this in mind next time I need a wallow.

Sounds incredible. When you read a lot, it really does take a special book to be able to get under your skin. I'm going to have to pick this one up soon.

Very few books can do that..To me..Its all about timing for me..If I'm ready emotionally ready..Then sometimes we never know how a book will effect us..This sounds like one..Will put it on my TBR..because of your review

I am all over this one because of your allowing yourself to be wounded!! I love it when a book cuts me emotionally and so this is one I want to read!

Thanks Ryan for another GREAT review, you make it sound interesting and mysterious too.
I always enjoy your reviews
Deb