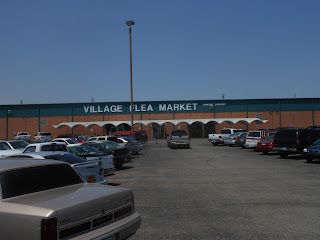 I bet nobody knew, or cared, that Wichita has the largest flea market in the state of Kansas.  Now before anyone starts rolling their eyes at me for doing a post over a flea market, let me explain.  If I have a Sunday off, which rarely happens, I rather enjoy going to the Village Flea Market.  It's not because I think I'm going to find a nice piece of home decor or something I can't live without for my kitchen.  It's more about people watching.  This place is always packed, and it's a  lot of fun to just go and hang out there.  It's amazing what you will see people do and say in order to buy something that somebody else thought was junk.

Now there are the booths that sell new items: cologne, incense, belt buckles, painted cow skulls (not sure if that qualifies as new), and questionable (taste wise) furniture.  It's the other booths I'm more interested in.  I can never figure out what makes people buy some of this stuff.  Who really needs a velvet moose that bobs it's head up and down?  Does anyone really need to own a wooden duck that looks like a 5th grader in 1953 made it?  Do people really take this art home, and hang it on their walls?  I don't know the answers to those questions, but I'm assuming yes, otherwise there wouldn't be people selling the stuff. 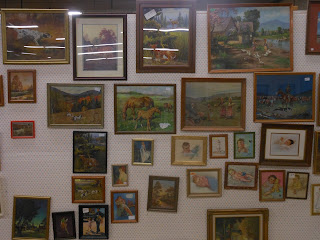 I never buy all that much, maybe a few books or records at the most.  I have bought an Eeyore toy and a Doctor Strange action figure, but don't tell anybody.  One of the first sections I'll head to when I get there is this huge area of used books.  Most of them are paperbacks, well worn paperbacks, but there are a few hardcovers mixed in.  I can't really say I buy a whole bunch from here, I rarely find one I like, or in good enough shape to take home.  If it's a really hard book for me to find, I'll go ahead and buy it, but I'll always be on the lookout for a copy in better shape.  This time around I did manage to find a Mary Roberts Rinehart book in decent shape, but it's one that I bought at a used bookstore just a few days before. 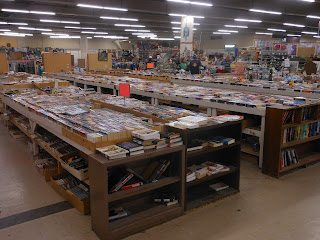 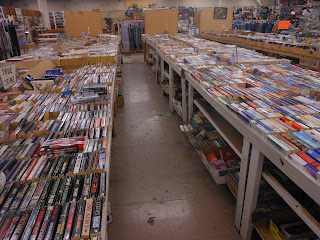 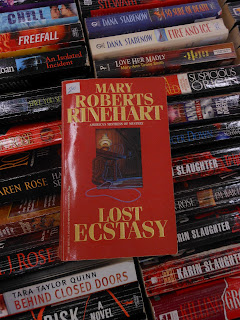 Right next door to the book tables, I think they are owned by the same people actually, are boxes and boxes of kids toys.  Most of them are the type that come from fast food kid meals, but there are some pretty cool action figures thrown in sometimes. 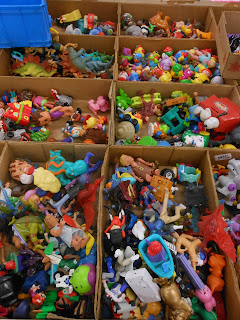 One of the reasons I go to the flea market is because I'm looking for two particular glasses.  As a kid,  I loved character glasses from restaurants like Hardee's.  As an adult, I'm not sure if I think it's because they are actually cool, or if it's more of a nostalgia factor, but I really want the Simon Sivelle and Brainy Smurf glasses.  Twice now, I've found a Simon Sivelle glass, only to have them break at home.  I have yet to find the Brainy glass.  So if you guys ever run across them, think of me. 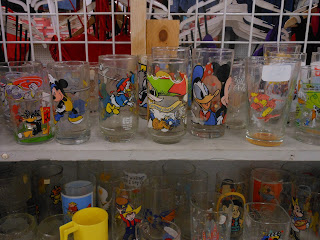 I do have to admit that I'm always a bit excited when I find a item that I never knew existed and can't imagine anyone being able to live without.  I was being a tad sarcastic there, but this time around, I came really close to buying it anyway.  Who knew that Tammy Faye Baker recorded albums when she was still with her cheating husband.  I found this one on a table of things listed for $.25 and I came so close to getting it.  I actually kinda admire Tammy Faye now, how couldn't I after seeing The Eyes of Tammy Faye when it came out.  Alas, no matter how campy it would be to buy it, I ended up passing. 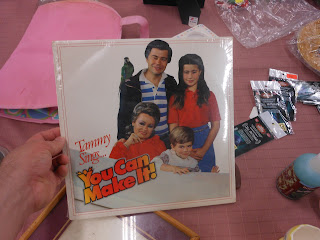 This trip, all I ended up buying where four comic books.  I haven't read a comic since I was in junior high.  When I did read them, I only read Marvel.  For some reason, I could never get into DC comics.  My son doesn't see to enjoy them all that much, so we don't buy any for him either.  For what ever reason I was in the mood that Sunday so I spent $4 for 4 comic books.  I took them home and read them all the same day.  I think I'm hooked again, so next time I'm at the flea market, I have a feeling I'll be bringing some more home with me. 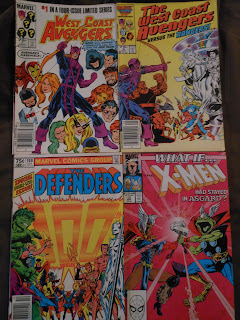 I was going to go and eat lunch after the flea market, but I got rather hungry when I was there.  I had never ate there, but I figured what the hell.  When I walked in the restaurant area, it reminded me of some of the food joints you will find on a fairground.  Which truth be told, have some of the best food in the world.  I wasn't sure what to get so I asked the woman at the counter what the best burger was, and she said the jalapeno burger.  I love spicy food, so jalapeno burger it was.  It was so frickin good, tons of fried jalapenos, bacon, cheese, a little lettuce and pico de gallo, and it was good to go.  The fries were homemade but a little soggy, they were still good though with lots of mustard.  I think I'll be eating there again. 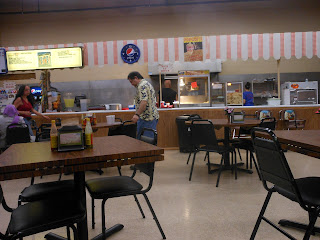 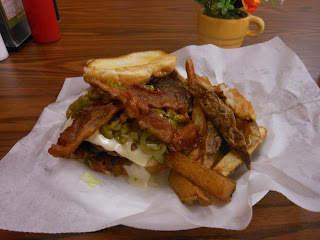 So that was my exciting trip to the flea market during my summer staycation.  It was really the last time I did anything worth mentioning.  The rest of my vacation was used up by getting caught up on stuff around the house and avoiding the 105 plus temps.  I read a lot, watched Buffy: The Vampire Slayer and just relaxed. It was a good time.  Hope you guys enjoy your summer no matter what you end up doing.

Bacon on a jalapeno burger? That's just genius! Sounds like a fun day!

Our local park has a flea market twice a year when people pay for a table and bring their items. We find all sorts of stuff when we go. Last year we got three skateboards (pretty worn out, but good enough for my crew) for $2 each. This year my daughter got roller skates for $2 and my son a crayon maker for $2- so much better than the $20-$30 they are at the store and it can be crossed off the Christmas wish list now! Glad you had fun!

I LOVE flea markets! I used to spend every Sunday gong to the local flea market or trying out new ones in nearby towns. Years later I still get pleasure using items that I got for a bargain at one of my flea market trips. (I love my $5 camcorder and $4 candle sticks) OK, I'm going to stop rhapsodizing now. Though I think flea markets are the one thing that I miss the most from living in America (not counting seeing my family, of course)

I still haven't made it out there yet. Sounds like I most definitely need to. Truth be told, I'm not sure I've ever even been to that part of Wichita before. It seems worth the drive, though.

I so wish I could do a staycation but that never seems to fly with my hubby. He works at home so I guess I understand that the last place he wants to vacation is the place where his office is at! I haven't been to the flea market in ages - but I think I might have to make a trip to one this coming weekend!

I love going to the flea market. We actually have a pretty good one here in Nashville, but it's at the fairgrounds so it's always a pain to go to it. They're talking about moving it to a section of one of our malls that has lost a lot of business and that would be sweet, but I won't hold my breath.

We used to have a ton of those character glasses when I was growing up. I guess mom ended up getting rid of them.

You've really made me want to go again. Maybe I will in the Fall when it cools down a bit.

A velvet moose that bobs its head up and down? - I've been looking for that all over the place! I love flea markets precisely because I see things I would never see anywhere else, even if I'd never buy it in a million years.

Looks like some amazing finds there at that amazing flea market. :) Thanks for sharing with us!