Darkness All Around by Doug Magee (Plus Giveaway) 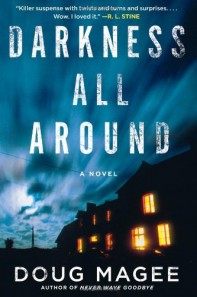 Within the span of one harrowing week, Risa's alcoholic husband, Sean, disappears, and her best friend, Carol, is brutally murdered.  Eleven years later, Risa has seemingly put her life back together again, comforted by the love of her new husband, who is a local politician, and the knowledge that Carol's killer has been convicted.  But then just as suddenly as he had disappeared, Sean resurfaces - sober, plagued by horrific recollections of Carol's murder, and convinced he was the real killer.

Sean's startling claim buzzes through their small Pennsylvania community, and Risa is left to wonder if the man she still loves actually committed the grisly murder.  Her growing belief in his innocence sends her on a treacherous search for the truth:  a search that reveals ugly secrets that her hew husband and the town's law enforcement community are hiding.

When I was offered this book for review, I almost passed on it.  I had read and reviewed the author's last book, Never Wave Goodbye, and I wasn't in love with it.  I enjoyed it, but wasn't sure I liked it enough to give the author another look.  To make the decision even harder was the fact that I had just given up on a book from an author I had given a second chance too.  I wasn't really open to the idea of doing it again.  For whatever reason, I ignored my doubts and jumped right in.

Every issue I had with Never Wave Goodbye, seemed to disappear in Darkness All Around.  The narrative was tighter and more cohesive.  The characters, because there were fewer of them, seemed to be solider this time around.  I was able to emotionally invest in Sean and Risa.  I wanted and was able to root for them.  I wanted them to be able to put the past behind them and carry on with their lives.  I wanted them to work out why Sean thought he was the one who killed Carol.  I went along for the ride, and I loved every moment of it.

Now I can't say that I was on pins and needles the entire book, but I do think that the author was able to build a tension that ebbed and flowed naturally.  None of the action felt forced or driven too hard.  It was a ride that would make me short of breath for a bit, then allow me to relax and get comfortable before giving me another adrenaline high.  It was a solid addition to the suspense genre, and I'm looking forward to the author's next contribution.

The giveaway will run until 11:59 pm CST on July 24th.  The giveaway is open to US residents only.  Entering is easy, just leave a comment with your email address.  I will us random.org to select the winner who will have 48 hours to respond to my email.
Posted by Ryan at 12:00 AM

What a nightmare for Risa! This book sounds like a page turner to me. Thanks for the giveaway, Ryan! kathy(at)bermudaonion.net

Great review Ryan, I also felt that the narrative was tight even though the suspense part, for me, came mostly towards the end.

I haven't read anything by this author, but this novel sounds really interesting. Sign me up for your giveaway! :-)

Actually this sounds perfect for someone I know! So, I'm entering. I might read it because it sounds like it has a thriller aspect to it.

This sounds like a page turner that I would be up all night reading!

Great insight, as usual. I think I would like to read this one. Please enter me and thanks for the chance.

I really enjoyed your review, you made it sound like a must read for me. I would love to read this book to find out if Sean really did kill Carol. Please enter me. Thanks!
ayancey(at)dishmail(dot)net

I really like it when an author writes a second book that totally changes my whole perception of their skills!

That happened to me before, too. I read a book by Stef Panney (THE TENDERNESS OF WOLVES) a couple of years ago that bored me. Ordinarily, I don't give authors second chances, but her latest book reviews for THE INVISIBLE ONES were so good I read it. And I was glad I did; it's excellent. Now I'm more inclined to give an author another try. Thanks for this offer. BETHVOLLBACH(AT)SBCGLOBAL(DOT)NET

I'm so glad you took a risk and read this one, seeing as it turned out to be so much better than you feared.

This book looks really good. Thanks for letting me know about your give-away.

Your review sounds like it is my kind of book! sign me up Ryan...
thanks, Annie Michelle