The A.B.C. Murders by Agatha Christie 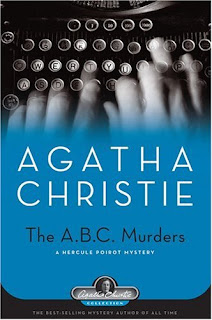 Alice Ascher, a shopkeeper in Andover, is bludgeoned to death in her shop.  Next to die is Betty Bernard in Bexhill - strangled with her own belt.  Then, Sir Carmichael Clarke's skull is crushed in Churston.  Clearly a serial killer with an alphabetical bent is on the loose - and an urgent hunt is launched for the fiend dubbed the A.B.C. murderer.  The taunting notes inspector Hercule Poirot receives just before a murder is to take place are even more disturbing than the A.B.C. railway guide that the methodical killer leaves at the scene of each crime.  Racing against the clock, Poirot tries to decipher each cryptic message and get one step ahead of thier exceedingly clever and ruthless killer.

Ever since I decided to read all of Agatha Christie's books in publishing order, I've been trying to remember what my first Agatha Christie book was.  Now I'm not going to swear on anything I hold dear, but I'm almost positive that this was it.  I can even remember my mom giving me this one for Christmas.  So I guess, if this is THE book, than I can credit The A.B.C. Murders for getting me hooked on Agatha Christie at a young age.

I'm always a bit curious, when I can remember, to see if my childhood fondness for a book holds over to adulthood.  When it comes to a mystery or a book written for adults, it's not always a fair comparison.  I know for a fact that I was not able to pick up everything Christie was dropping when I was in the 5th grade. I was smart, but I wasn't that smart.  It's also one of those comparisons that while I'm curious to see what the results will be, I'm just a bit hesitant too.  I don't want my childhood memories dashed by the cold, hard reality of today.  I think it's a pretty safe bet to say that as far as The A.B.C. Murders go, those memories are safe and secure.

Motive is always the driving force behind a murder mystery.  Without a well articulated motive, a book can fall apart and become a nightmare for the reader.  Mystery writers tend to fall back on revenge, money, or love as the basic building block.  Now the writer will always add in a whole bunch of window dressing trying to disguise the simplicity of the motive, but in the end, if you can figure out the motive, you can solve the case.  With The A.B.C. Murders, Agatha Christie takes one of those basic motives and weaves it within a complex series of events that highlights and masks at the same time.  It's a brilliant feint on her part, and one that I really haven't seen a lot of authors use.  I just finished reading Let the Devil Sleep by John Vernon, review later this month, and I think it's the only other book I've read that uses the same concept.

Now if you couldn't tell by now, it's a devise that I absolutely adore and one that I appreciate all the more as an adult.  In the 5th grade, I understood what was going on, but I couldn't appreciate the complex nature in which Agatha Christie crafted her story.  She manipulates the concept of motive in such a way that I think I'm more in awe of her now, than I ever was before.  If there is ever an argument to be made for why you should reread books as an adult, this book is it.

It's nice to know this one holds up to a re-read so well!

I never read any of Christie's books, I think I watched a movie based on her books and that put me off.

I know, I should know better. Glad you enjoyed the book, one of these days I'll get around to them.

I never read any of Christie's books, I think I watched a movie based on her books and that put me off.

I know, I should know better. Glad you enjoyed the book, one of these days I'll get around to them.

This is one I actually haven't read--I'll have to pick up a copy next time I'm at the library. I wonder if there's an Alice Ascher in our Andover. That would be pretty awesome.

I can't believe all of the great reviews that I have been seeing for Agatha Christie books lately. I think that there are many books that are worth revisiting as an adult. I should pick up Christie again. Thanks for your great review.

Great review, Ryan. I am thoroughly enjoying my foray into Agatha Christie. I'm currently reading The Secret Adversary, the first Tommy and Tuppence, and I'm really enjoying it (although I was supposed to be done at the end of June). I'm more of a fan of novels than short stories and I have to say that I'm enjoying this one much more than I did Partners in Crime. Can't wait to keep progressing down the list. I think this month is Murder on the Links.