Twilight of the Elites by Christopher Hayes (Giveaway Included) 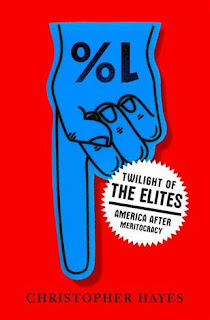 Over the past decade, Americans watched in bafflement and rage as one institution after another - from Wall Street to Congress, the Catholic Church to corporate America, even Major League Baseball - imploded under the weight of corruption and incompetence.  In the wake of the Fail Decade, Americans have historically low levels of trust in their institutions; the social contract between ordinary citizens and the elites lie in tatters.

How did we get here?  With Twilight of the Elites, Christopher Hayes offers a radically novel answer.  Since the 1960s, as the meritocracy elevated a more diverse group of men and women into power, they learned to embrace the accelerating inequality that had placed them near the very top.  Their ascension heightened social distance and spawned a new American elite - one more prone to failure and corruption than any that came before it.

I'm a humble book blogger who happens to be addicted to politics and public policy almost as much as I am to reading.  I will never claim to be a policy wonk or to know everything there is to know about the way our government works, but I think I stay abreast more than most.  I wish I had the time or made a different career choice when I was in college, but I learn what I can, pay attention to what is being debated, and really try to analyze the way I think about a given topic or situation.  Now being a life long reader, you would think that I would be reading a ton of books on public policy, political history, and maybe a civics text book or two.  That would make sense, but it really doesn't reflect the reality of my reading habits.

Since I was a kid, reading has been an escape from the everyday world, something that politics and policy are a huge part of.  It's only been within the last few years that I've become interested in combining my two interests.  It's a combination that has allowed me to further develop my personal beliefs and has shaped the way I analyze the information that seems to be pouring in 24/7.  But when I add in blogging/reviewing into that mix, I fell myself doubting my choices.  After reading Twilight of the Elites, I'm left with some serious qualms.

There are times I like to think I'm smarter than I am, that I know more than those around me.  When I read a book like Twilight of the Elites, I realize that my grasp on reality may not be as strong as I would like to think.  I forces me to acknowledge the fact that maybe I don't follow the inner workings of government and policy makers as much as I thought I did.  It makes me rethink the amount of time I actually put into the endeavor of learning all there is to know in order to make better decisions.  It makes me grateful that there are people like Chris Hayes who do take the time to learn, analyze, and share the information that I simply don't have the time to gather myself.

I can not, nor want to, delve into the arguments that Mr. Hayes makes for why our upward mobility through meritocracy has created the very fissures that seem to be dotting the political landscape.  I don't have the vocabulary nor the knowledge to make any sort of analysis credible to anyone who happens to read this.  What I do want to touch on is the obvious intellect that Mr. Hayes shows throughout the book and on TV, yes I do watch MSNBC for my news.  At no point in time does the narrative that he is relating feel illogical or reaching in it's conclusions.  While there are some vocabulary choices that some my not know without having to look them up, he doesn't talk over the heads of his readers.  It's all pretty straightforward, most of which can be credited to the way Mr. Hayes broke his argument down, allowing the reader to follow along at their own pace.


Thanks to Danielle at Crown Publishing, I have an extra copy to giveaway.  The giveaway will be open to US/Canadian residents only.  The giveaway will run until 11:59 pm CST on July 20th, CST.  To enter the giveaway please leave a comment, maybe with a reading suggestion of your own, including your email address.  I will use random.org to draw the winner, who will have 48 hours to respond to my email.

I love Up with Chris Hayes, but I haven't had a chance to pick up this book yet, so enter me in your giveaway! :-) I mostly read for escape, as well, with most of the non-fiction I read being about food (no surprise there). I do like being informed about what's going on, though, and read AlterNet, Jezebel and The Guardian, among other things. It's not easy being a liberal in Kansas!

I already have tons of questions just reading the summary and I can tell this book will really have me questioning what I believe. Is it really the twilight of the elites??? I don't know. I live in an area where they seem to be prospering just fine.

Thanks fir the giveaway!
I suggest another political book I am reading now, not easy, but real good stuff: Ira: The Borrowed Kettle by the getting famous Slavoj Zizek. here is the goodreads link to it: http://www.goodreads.com/book/show/2018175.Iraq
Emma @ Words And Peace
ehc16e at yahoo dot com